Today, alt-pop sensation, songwriter, and filmmaker Zolita introduces her upcoming EP and a brand-new cinematic universe with the release of her single “20 Questions” and its accompanying music video – the first in a series that will deliver a sonic and visual journey of falling in and out of love, and the time in between.

“‘20 Questions’ was born when I was thinking back on an ex who cheated on me and all of the initial questions that ran through my head that I didn’t get the chance to ask,” Zolita shares

Zolita – The Somebody I F*cked Once Trilogy (Director’s Cut)

Posted in Videos Tagged with: Somebody I Fucked Once, Zolita

Zolita – I F*cking Love You

Posted in Videos Tagged with: I Fucking Love You, Zolita

“I think it’s so common for people to believe that your first love is going to be your only love,” says Zolita on the inspiration for the trilogy. “I wanted to capture that feeling of trying so hard to hold onto someone, even though you’re in such different places now.”

Posted in Videos Tagged with: Single in September, Zolita

Zolita – Somebody I Fucked Once

Posted in Video of the Month Tagged with: Somebody I Fucked Once, Zolita

Posted in Videos Tagged with: New You, Zolita Zolita came to our attention in August when we received the video for “Fight Like A Girl (see Unfinished Mail).” She is a singer-songwriter who’d previously released Immaculate Conception EP. She is working on an unnamed new EP and is working with Paige Duddy of xylo and xylo’s producer Lee Newell. FEMMUSIC was honored to speak to her about the songwriting and process. For info visit http://zolitamusic.com/
FEMMUSIC:  Can you describe your songwriting technique?
Z: It definitely varies. I write a lot of song lyrics in my notes and record melody ideas on my phone that I refer back to when I actually sit down with a guitar or keyboard.
When I actually sit down to write a song I’ll start with a title or concept, usually write the chorus first and then the rest.
FEMMUSIC:  With your new EP I understand you were co-writing with Paige Duddy and Lee Newell. What did they bring to the writing? How was it co-writing vs songwriting by yourself?
Z: Yes! Writing with Paige and Lee was so awesome. It was actually only my second time co-writing. I’m so used to writing solo, so it was refreshing to write with them because we’d all bring our experiences to a concept we’d be working on. Paige and Lee both have great ears for pop so they really helped me condense my ideas and lyrics in a way that was best for the song. I hadn’t worked with that kind of structure before. It was also really great to have three sets of ears, because when we were writing the melodies we’d all hear something so different and then all the best melodies came together. The best thing about co-writing is you have to finish the song even if it sucks! If you’re by yourself, there’s no one else pushing you but yourself so you can just put your guitar back in the case and call it a day.
FEMMUSIC:  What was the biggest challenge making the new EP?
Z: I think the biggest challenge was finding resources and the right people to work with. I’m an independent artist so it’s not that easy! I’m glad it took me the amount of time it did though, because it allowed me room to write more and explore different sounds before I reached the sound the EP has now.
FEMMUSIC:  What do you think the biggest differences were making this EP vs Immaculate Conception? What lessons did you learn in the interim?
Z: Immaculate Conception was more of a collection of songs I’d written and gotten produced over a long stretch of time. This next EP was more planned – I flew to LA to work with Paige and Lee for a week, brought a notebook of ideas, and we banged out five songs.
FEMMUSIC:  Tell me about “Fight Like A Girl.” First the songwriting. How did the idea originate and how did you develop it?
Z: Fight like a girl was the first song we wrote together. I knew I wanted to write a feminist power anthem and I wanted it to be catchy but also smart and meaningful. Lee came up with the idea “Fight Like a Girl,” wrote a dope melody, and then we filled it out from there to be more directed towards the current White House administration. 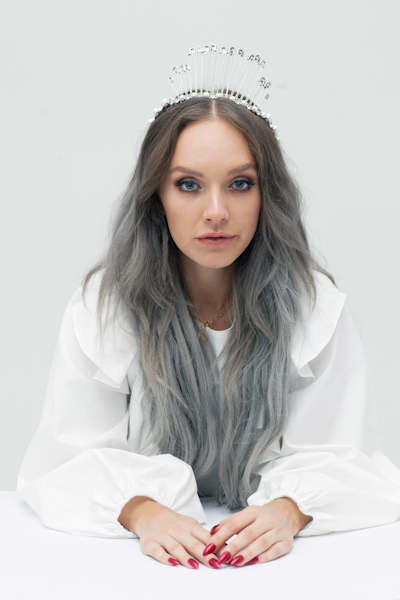 FEMMUSIC: Tell me about the “Fight Like A Girl” video. Did it bring the vision you wanted to fruition or would you have wanted to do more? What was the biggest challenge making it?
Z: Yes! The video is everything I wanted it to be and more. I couldn’t have asked for a better group of women and I’m honored to have had the opportunity to tell their stories. The hardest part was probably the amount of locations – we crammed a studio shoot, outdoor shoot, and nine storylines into 4 days! I don’t know how we did it.
FEMMUSIC:  As a woman in the music industry have you been discriminated against?
Z: The best part about being independent is that I haven’t dealt with too many “industry” people. I’ve definitely been discriminated against by publications and people I was hoping to work with, but never by the people I’ve worked with directly.
FEMMUSIC: Whom would you most like to collaborate with or tour with and why?
Z: I’d love to collaborate with Kehlani or Halsey! My dream would be to open for Lady Gaga. They are all bad-ass trailblazing women in the industry who I look up to tremendously.
FEMMUSIC: What one thing would you like to change about the music industry?
Z: It would be amazing if there were more female CEO’s!

Posted in Interviews Tagged with: Zolita