Girlpool – Nothing Gives Me Pleasure

Girlpool, the Los Angeles duo comprised of Avery Tucker (he/him) and Harmony Tividad (she/her), share a video for “Nothing Gives Me Pleasure,” the final single and album opener for their highly anticipated Yves Rothman-produced new album Forgiveness, out April 29th via ANTI-.

“Nothing Gives Me Pleasure is about trying to love yourself when it feels like no one else will,” says Tividad. “It was written during a time when I was working so hard to get someone specific to love and recognize me. On the path to doing that, I diluted myself so much that I lost sight of my own needs. This video plays with the lengths we go to to feel loved and how so many faces of intimacy may disguise what love actually looks like to us specifically. I have a history of getting lost in the labyrinth in the struggle for affection. In this video I wanted to interface with my own patterns in the attempt to better see and love myself.”

“‘Lie Love Lullaby’ is a song about a time where I felt that my innocence affected my ability to choose a person who was good for me,” says Tucker. “In the past, it’s been painful to choose somebody that didn’t believe in me, and I think the most painful part was that I allowed myself to pick a person that didn’t recognize my entirety. I wrote this song wondering, did I recognize it myself? If I had the wherewithal to tolerate their minimizing perspective?” 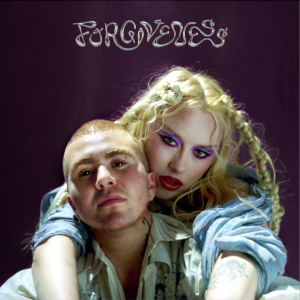 Forgiveness, which finds the duo embracing weirdo-pop decadence without sacrificing the poetic curiosity that has always made their music so absorbing, is also their slickest and most ambitious album to date. It’s filled with idiosyncratic and provocative gestures that simultaneously support and complicate the emotionally intricate material. With its unique blend of introspective earworms and surreal party music, Forgiveness reaches beyond the loosely sketched parameters of “indie rock,” challenging any preconceived notions of what a Girlpool album can or should be.

To support their vision of a sound at the intersection of Hollywood futurism and post-grunge sincerity, Girlpool enlisted help from producer Yves Rothman (Yves Tumor, Miya Folick). While they had conversations with other potential collaborators, Rothman’s genuine enthusiasm for crafting music at that crossroads — freaky and fucked-up, but also heartfelt and grounded — helped seal the deal. Rothman’s input on Forgiveness marked the first time Harmony and Avery allowed someone all the way inside their intimate, borderline telepathic approach to song-making — a pure partnership that has remained constant, even as the music has evolved.

Today, LA-based incendiary rock band Kills Birds are sharing their introspective and impassioned new single “Cough Up Cherries,” the third offering from their upcoming, sophomore album Married, out via their new label home Royal Mountain Records and KRO Records on November 12th. The band have recently confirmed several tour dates with Foo Fighters and Sleigh Bells for 2021 and 2022. The new album was recorded at Dave Grohl’s Studio 606 by invitation of the man himself, and produced by Yves Rothman.

Vocalist Nina Ljeti explains “Cough Up Cherries” and says, “There are a lot of themes to Cherries, as it was written during the height of the pandemic in 2020. The song touches on feelings of loneliness, paranoia, and hopelessness that we all experienced. In addition, Cherries also addresses the identity crisis we all face in the digital age. What our performative personas are vs. who we really are when we’re left alone, and if in the midst of great injustice, we are actually able to hold our own selves accountable.”

Guitarist Jacob Loeb adds, “This song’s instrumentation reflects some of the layers of confusion and chaos that were felt by so many at the height of the pandemic. It’s music that we found at the apex of isolation and outrage. This song has a deeply ominous kick drum heartbeat that drives through the unnervingly twisted and interwoven guitar and bass parts that crescendo to a chorus that feels like an authentic expression of our collective rage at that height of that chaotic time. Bosh Rothman, who drummed on the record, brought some serious fire to the drum fills that close out the song.”

Aly & AJ – Symptom of Your Touch

Aly & AJ are releasing a new album on May 7 called a touch of the beat gets you up on your feet gets you out and then into the sun. They will be holding a virtual album release show at The Theatre at the Ace Hotel in Los Angeles. Produced by Yves Rothman and recorded with live instrumentation at the legendary Sunset Sound, the album finds its title taken from a lyric on the record that captures the essence of the 12-track collection — it swirls together sisterhood, solid songwriting, and the SoCal sun, creating an inspiring, invigorating experience that feels 70s-inspired yet undeniably cutting edge in the modern music landscape.

Posted in Videos Tagged with: a touch of the beat gets you up on your feet gets you out and then into the sun, Ace Hotel, Aly & AJ, Los Angeles, Sunset Sound, Symptom of Your Touch, The Theatre, Yves Rothman