Gabriela Bee, Matt and Kim, Walk Off The Earth

Gabriela Bee, Matt and Kim, Walk Off The Earth at Red Rocks Amphitheatre
May 15, 2019
Photos by David A. Barber

Walk Off The Earth – Sarah Blackwood 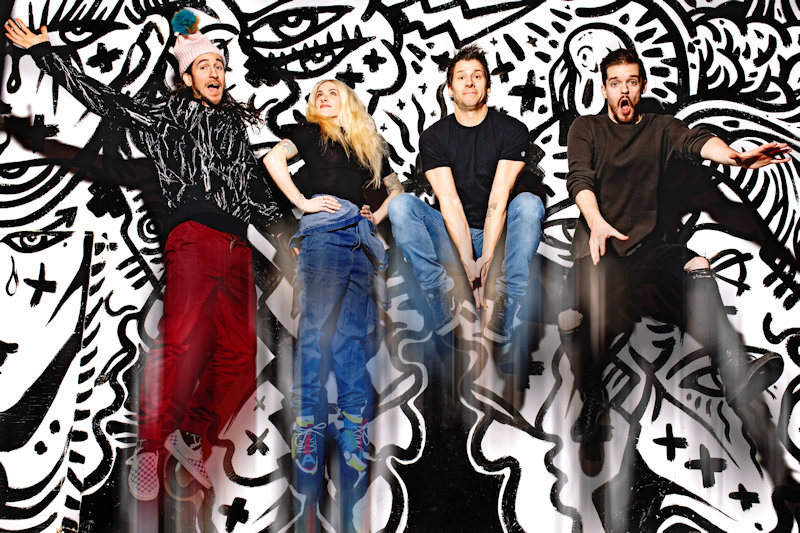 How do you come back as a band after the passing of a band member? What do you change? What remains the same? Can you connect in the same way with your fans? This is a question no one wants to answer. Walk Off The Earth faced that question last year after the death of Mike Taylor. Walk Off The Earth has been around for over a decade and is known for songs “Somebody That I Used to Know”, “Red Hands”, “Fire In My Soul” and many others. They also have made a name for making covers of popular songs with the stars who made them including Lisa Loeb and Sarah Silverman:

The four piece band is working on new material and touring with a show to honor Taylor. They bring a range of instrumentation and a joyous heart to the stage. FEMMUSIC was honored to speak with Sarah Blackwood about the music and the life.

FEMMUSIC: Tell me about the band and the tour after Mike Taylor’s passing. What has changed?

SB: A lot has changed. We have spent a lot of time preparing a new show that will honor him in the best way we can and make us feel like he’s still with us every single night.

FEMMUSIC: WOTE releases as many covers as originals. The most recent is “Video Killed the Radio Star.” Why do you do it? How do you pick the covers you’d like to do?

SB: We do it because we love to! There are so many good songs out there in the world that deserve to be reinvented. We love doing original songs so much but we also love reinventing other songs that we can’t get out of our heads.

FEMMUSIC: Tell me about raising kids on the road. Why do you think it is important? Coming from a musical family what did you learn from being on the road?

SB: It’s not important to raise your kids on the road. It’s what I had to do in order to keep my career. I think the person that learned the most from that experience was me and the biggest thing I learned is how important it is for children to have a schedule because we never had one. I don’t think it matters where you’re raising your children as long as you are all happy and healthy! It is possible to raise a family even when your career involves traveling a lot, but would I recommend, no.

FEMMUSIC: You’ve been releasing some new original songs. Is a new EP or album in the works? Do you have a timetable?

SB: Yes! We will be releasing a new original in the upcoming weeks and we are expecting to release an album in the next few months. We’re really excited for our fans old and new to hear the new music that we have been working on!

SB: Well, it’s different every time. Sometimes we start with a rift on a guitar or on a piano and sometimes we start with a beat. Sometimes we are inspired by a theme, it all just depends on the day really. A lot of the time we’ll come up with the melody and while we’re doing that we just start to sing words that feel right. From there you can start to understand what the song is going to be about and songs always go through a lot of transformations. As artists, it’s almost impossible to know when a song is finished.

SB: Wow. That’s a great question but I think it’s impossible to answer. Music is something that connects people on a totally different level than everything else because there is a song for every emotion, for every experience, for every holiday. That’s the wonderful thing about music, it continues to inspire and ignite fires in people. So, I think to choose one song is just impossible. It’s all relative.

SB: I’ve always been the only female throughout my musical career in all the bands I’ve played in and along with that has come many challenges. It’s not always easy being female in male-dominated industry, but I think that’s changing. The biggest challenge I’ve had to face was when I got pregnant for the first time. I was asked by our all male staffed record label how much time I was going to need off and if they should replace me and I looked them in the eyes and said no one can fucking replace me, I don’t need any time off. I played shows until I was 8.5 months pregnant and was back on tour three weeks after my first son was born. What everyone thought was going to be the demise of my musical career skyrocketed our band to being bigger than it had ever been before. My pregnancies only helped slingshot us further into where we wanted to go!

SB: I think what I would like to see changed in the music industry is already changing. Artists get to be more independent, females are taking over the charts, record labels aren’t completely in charge anymore. People are able to find more music instead of being told what to listen to. So, we are going in the right direction and everything takes time.

Posted in Interviews Tagged with: Sarah Blackwood, Walk Off the Earth

Walk Off the Earth – Video Killed the Radio Star

Posted in Videos Tagged with: Video Killed the Radio Star, Walk Off the Earth