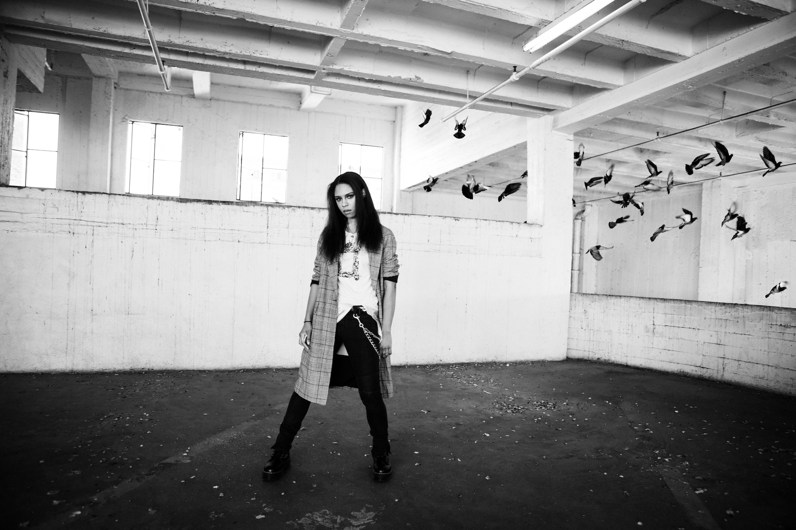 Troi Irons started young and has matured. She was signed to a major label early and faced the horrors of the industry. She is now getting ready to release her self-produced album Lost Angels. The album is a journey of self from the first single “Lost Angels” to the final track “Home.”

Irons is known for a spectacularly aggressive style. She is blunt and straightforward, as she is in our interview. She is also an artist to watch. For info visit https://www.facebook.com/troiirons/

FEMMUSIC: What was the biggest challenge making the album Lost Angels?

TI: The biggest challenge was finding the time. I was working several jobs and I had to make the decisions to cut them out and trust the process. I had to set my life up so that I could prioritize my music. And that was only by the grace of God. It took some real time and sacrifice as well but I stopped surviving. Now I’m learning to live.

FEMMUSIC: The album is a journey from “Lost Angels” to “Home.” What challenges did it present songwriting and songchoice in forming the final product? Were there songs you rejected that you wish you could have brought in?

TI: I produced and wrote the whole thing so the final product is exactly how I wanted it. That’s very important to me. The story flowed because the album came naturally over the course of years of my life. My real challenge was getting the songs to flow together sonically. So when I went into production mode, my biggest focus was sound choice and instrumentation.

FEMMUSIC: You started in this industry early. What benefits do you have by being an independent artist? Would you sign to a label again?

TI: I don’t think I would sign to a label again. I said that before, then I signed to Def Jam. This time I mean it. Labels don’t understand how to be small or how to grow. They develop top down. There’s no longevity unless you’re already famous or just really lucky. Being independent allows me to stop that emotional rollercoaster of the “bunch of money, big opportunity – STOP and waste away in your room while they pass an idea through 8 levels of command – bunch of money, everybody starfuck – STOP and don’t release music for a year.” As an independent artist, I get to slow burn. I’m like a soy candle that eventually burns the barn down rather than a single firework that only leaves a burnt smell.

FEMMUSIC: You’ve worked with other artists on their projects. When it is your own project, how do you approach it differently?

TI: With someone else’s art, my goal is always to elevate them and mold to what they’re doing. I shut up and listen. When it’s my project, I expect everyone to shut up because I’m not gonna listen, haha.

TI: I wait for the train to hit me then I hop on.

TI: Rachmaninoff’s Prelude in C Sharp Minor, Op. 3, No. 2. It’s grand and dark and beautiful… Timeless. I don’t know if I’ll ever make something that great but I try every time.

TI: Eh, I think there are pros and cons. Pros is everyone wants to talk to me and hear my music – guys never get the aux cord. Cons – I have to fight to be seen as a person sometimes. I shot this video with Interscope/Ultra for this EDM collaboration and the director told the male actor to grab my thigh and kiss me. I said no, I wasn’t comfortable and the director said “we’re gonna get my vision!” Then he pulled me aside and whined about my attitude when I wouldn’t look him in the eyes or talk to him. He basically wanted to watch me get fucked and have me look at him doe-eyed while it was happening. Then he told the label I was being difficult. I’ll never forget that director. The way I overcame was I created my own world. I no longer enter other people’s spaces. I produce my own music, direct my own videos, style my own shoots, run my own label. If anyone wants to come into my space now, they follow my rules.

TI: I would love to tour with Halsey. I think she’s such a great performer and presence – watching that show every night would grow me in ways.

TI: I’m not sure if I would change anything. Music is making more profit in this era than it ever has before. Artists have direct access to their fans and the ability to have full creative control. At this point, it’s survival of the fittest. Evolve and you can really be living the dream.