The Gossip, The Butchies, and Sleater-Kinney 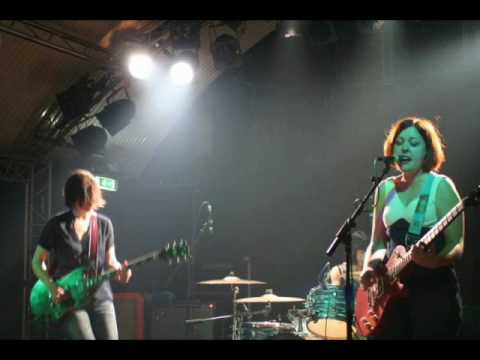 The Gossip, The Butchies, and Sleater-Kinney

“It’s time for a new rock n roll age,” sings Sleater-Kinney on their fifth album All Hands on the Bad One.  Yes, indeed.  For those of you that are helping in the revolution (assume that if you’re reading this, you’re included), the line-up for the May 22nd show at New York City’s Irving Plaza was like a tailor-made Lollapalooza.  The Gossip, The Butchies, and super-heroines Sleater-Kinney spanked the mainstream and sent it to bed early.  Play time’s officially over.

Originally from Arkansas, now from Portland, The Gossip is a three-piece band (four-piece, if you include the dancer) lead by “Mama,” a younger, whiter Etta James with a tattoo of an anchor on her left arm.  Wearing a zebra-print tank top and large silver hoop earrings, Mama’s got some moves that would make those Vegas showgirls pay attention.  Asking if there were any “fat ladies” in the house, Mama said it was time to represent.  The Gossip proclaimed their mission: “We want y’all to dance your asses off.” Mama’s resonating soul-stacked voice quickly got the crowd jerking their booty.  Musically, The Gossip can set the stage a’flame with their groovy and shocking brand of rock.

The Butchies are quickly staking their claim in this new rock n roll age.  Alison Martlew, Kaia Wilson, and Melissa York debuted with Are We Not Femme? on Mr. Lady Records.  Their latest release, Population 1975 is turning indie heads.  The recipients of two GLAMA awards (one last year, one this year), this North Carolina trio mixes punk and pop until it explodes.  All that, and they wear matching uniforms that look like those full-body mechanic outfits.

Wilson’s introspective singing and riot-infused screams had the crowd swaying and swirling.  Can’t help but see a little mix of Kurt Cobain and Kim Deal in Wilson’s totally rock n roll stage performance.  Lying on her back with sneakers up in the air and her guitar on her chest, she slowly stood, flicked her tongue out, and played like a rambunctious teenager.  Pulling her guitar to her mouth, she planted a wet one on her instrument, oblivious to what was going on around her.  Beautiful.

But the Butchies have a great sense of humor, thanks largely in part to drummer York.  More than once, she’d emerge from behind her drum set, grab Wilson’s microphone, and spill her goofy guts.  She took a break to recite the lyrics of Journey’s “Faithfully,” while Irivng Plaza nearly pissed itself.

The Butchies have themselves a very good thing.  Go to http://www.mrlady.com/butchies.html for more of the un-femme.

Besides being a very astute band, Sleater-Kinney gets props for always setting up their own equipment.  No swollen egos in the house tonight.

Singers/guitarists Corin Tucker and Carrie Brownstein and drummer Janet Weiss started off with the first three tracks from their fifth album, All Hands on the Bad One.  “Ballad of the Ladyman,” “Ironclad,” and the title track throttled the smoky air. Brownstein and Tucker interwove their vocals, bounced harmonies off each other and exchanged a wicked grin or two, while Weiss hit hard and kept everything steady.

Tucker’s cries, Brownstein’s incessant pogo-ing, and Weiss’s severity drove the crowd mad.  Overheard in ruckus: “I saw Nine Inch Nails the other night, and the 30,000 fans didn’t have any of this energy!!”  That’s because Trent Reznor doesn’t have the love that Sleater-Kinney has.  And let’s not even talk about style.

Songs from the set included “Call the Doctor,” “Start Together,” “Turn It On,” “Youth Decay,” “End of You,” “The Drama You’ve Been Craving,” “Male Model,” “Little Babies” and “The Professional.”

Sleater-Kinney is the new rock n roll age.  To all the disbeliveers, it’s time to update your files or plan an early retirement.

The Gossip, The Butchies, and Sleater-Kinney are all part of Ladyfest 2000.  For information and festival passes, go to www.ladyfest.org.

Posted in Live Show Reviews Tagged with: and Sleater-Kinney, The Butchies, The Gossip