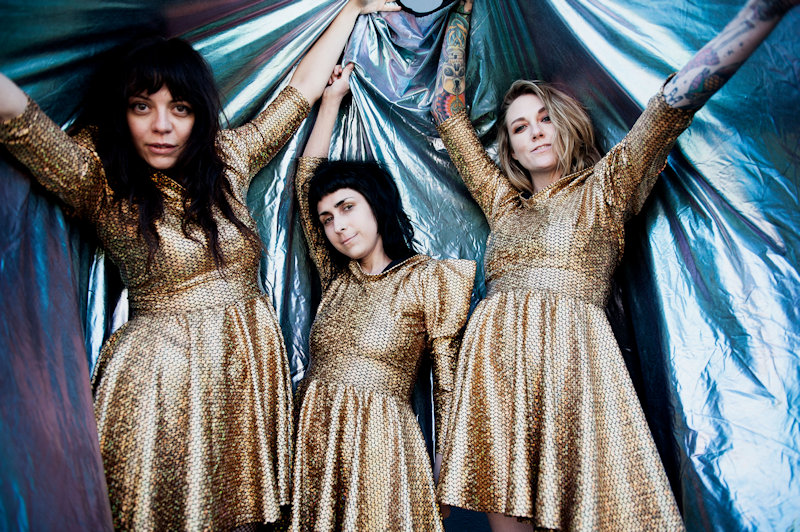 The Coathangers are a punk rock trio from Atlanta consisting of Julia Kugel-Montoya, Meredith Franco and Stephanie Luke. This year they released their 6th studio album called The Devil You Know. The album has complex composition mixed with blunt language on society today. It includes the singles “Hey Buddy”, “Step Back” and “F the NRA”

The band completed a winter tour recently. You can find FEMMUSIC’s photos of it at:

FEMMUSIC:  What was the biggest challenge making The Devil You Know?

CH: It was actually a pretty easy album to make.  The hardest part was figuring out the cover art.

FEMMUSIC: You worked with Nic Jodoin again on this album. What does he bring to the project? How is he to work with?

CH: Nic rules.  Since this is the 2nd record we have worked on together, we know each other very well  which makes working together much easier.  He is honest and direct and very supportive of our visions.  Nic also challenges us and pushes us to strive to be better.

FEMMUSIC: What were your vision and goals with this album?

CH: We wanted to be a bit more outspoken on current events and things that were frustrating to us, but we didn’t want to do it in a preachy manner.  We really focused on the pre production of the album as well and pushed ourselves with the composition, lyrics, etc of each song.

CH: It varies. Sometimes one of us will come to practice with either lyrics or an idea/riff/melody and we will all build around that. Other times we just kinda jam around and something will come together organically.

CH: I think “Fuck the NRA” is one of the most important songs on the album because of its message, but one of my favorites is “Step Back” because of the vibe and the way it shifts throughout the song.

FEMMUSIC: The album dives into politics, sexism, bigotry and more. This is not unknown territory for you. There is an ethos in punk that has always been against the establishment. I was wondering if you could explain how you view your role as musicians to evoke change?

CH: That’s a tough one! All we can do is write music that we believe in and stand behind. Hopefully people who listen to our music can relate and feel like they aren’t alone in their ethos.

Meredith answered this one: The Beatles “If Not For You” because she used to listen to it with her father, who recently passed away.

FEMMUSIC: What challenges, if any, have you faced as a woman in the music industry? And how did you overcome them? How has this changed over time?

CH: We’ve had a few experiences as women that have been more annoying than anything, but sometimes its not because we’re women but just because that certain person (whether its a promoter or sound engineer, etc) is a jerk to everyone.  Other times it’s been an obvious male/female scuffle, a lot of times involving said male assuming we’re incompetent, man-splaining, etc. Ten years ago this would piss us off and we were a bit more vocal or reacted a bit more than we do nowadays. The best thing is to kill em with kindness and simply nip it in the bud in a more professional way.  There’s been a lot more non male musicians, stage managers, promoters, etc in every realm of the music industry over the past ten years which is refreshing because back in the day it was considered more of a “boys club” .

CH: Beyonce because she rules!

CH: The insane “importance” of social media.  A band shouldn’t be less noticed because they only have 5,000 followers on Instagram, Facebook, etc. It seems as though a bands success and value is determined through these platforms and I feel like its gotten out of control.  Just go out there and make music you wanna play and fuck the haters.

Posted in Interviews Tagged with: The Coathangers

Posted in Videos Tagged with: Stranger Danger, The Coathangers

Posted in Videos Tagged with: Captain's Dead, The Coathangers

Posted in Download of the Month Tagged with: Captain's Dead, The Coathangers