Uwade – Do You See The Light Around Me?

Today Psychic Hotline, the artist-forward record label founded by Sylvan Esso, releases the next installment of their singles series: “Do You See The Light Around Me?” by Uwade and produced by Brad Cook (Snail Mail, Waxahatchee, Bon Iver, Hiss Golden Messenger).

The Nigerian-born and North Carolina-raised Uwade released her debut 7-inch “The Man Who Sees Tomorrow”/ Lodarore”  last year while finishing undergrad at Columbia University, and now shares her latest offering through the Psychic Hotline series, as she continues her education at Oxford University, where she is getting her masters.

“Having a crush is thrilling and torturous. And I think my experience in this song highlights both of these aspects. Our reactions and responses to “liking” someone are intensely personal and individual, often informed by our own insecurities, needs, and fears. When I look at someone I like, whether I want to be with them or want to be like them, I project desirable qualities and traits onto them and, for better or worse, make them the standard by which I measure myself. I see them and want to know what they see when they look at me. I question myself and they hold the answer. This can be great if feelings are mutual, but agonizing if they’re not.

But there’s a pivotal moment in the song that I think is really important. As much as this song is other focused, primarily on the person I admire, in the bridge I’m sort of able to escape the trap that I set for myself. I imagine what it would be like to disappear into a kind of spiritual cloister. To pose all the questions that I’ve been asking my crush to myself.

To seek answers from within, or at least from an immutable source. And to be satisfied in all that I am, all that I have been, and all that I can be. Once I’ve done this, I think the song becomes one of mutual joy and ecstasy. There is still a desire for the other person, but I finally and fully see myself, and all I’m doing is asking them to join me.

I wrote and recorded the demo of DYSTLAM? in a three day fever during my last semester of college. When I heard about the Singles Series I knew this would be the song for it. I went to the incredible Brad Cook with my finished demo, and instead of just trying to replicate what I had already recorded, we went back to the basics and rebuilt the track. We experimented with sounds, instruments, tempos, and structure, trying to capture the essential feeling of the song and represent that as fully as we could. He was super kind and collaborative, and he encouraged me to have fun in the studio and explore all the places the song could go both sonically and emotionally. The end result is a beautiful union of all the iterations of the track, and an invitation to the audience to find themselves in it.” – Uwade

Posted in Videos Tagged with: Brad Cook, Do You See The Light Around Me?, Lodarore, Psychic Hotline, Sylvan Esso, The Man Who Sees Tomorrow, Uwade 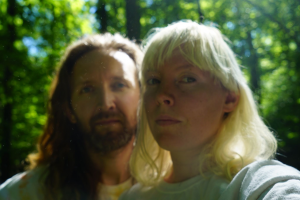 Today, Andrew Marlin and Emily Frantz of Watchhouse – the critically acclaimed roots music duo who until recently were known as Mandolin Orange – announce their new self-titled album Watchhouse, out August 13 on Tiptoe Tiger Music / Thirty Tigers. With the change of name comes an artistic rebirth: While still firmly rooted in poetic Appalachian folk, there’s a sonic adventurousness informed by American primitivism and ambient soundscapes that gives Marlin and Frantz’s songs a new, unknowable allure. Watchhouse is audacious, spectral music that wrestles with and finds magic in the relationships we build with our families, our society, our planet, and ourselves.

Produced by Andrew Marlin and Josh Kaufman — who has produced records for The National and Bonny Light Horseman, and also played on Taylor Swift’s folklore and evermore — Watchhouse, as the name change suggests, is a reinvention. These nine songs are both personal and political, touching upon Marlin and Frantz’s newfound parenthood as well as climate change and caustic online interactions as they parse out how to live a kinder, more decent life on their own terms.

To create the album, Watchhouse decamped to Smith Mountain Lake, a sprawling hideaway at the foot of the Appalachians. Kaufman urged Marlin and Frantz to approach the process with new eyes and throw out their old conceptions about what their music sounds like. Alongside drummer Joe Westerlund, guitarist Josh Oliver, and bassist Clint Mullican, Marlin and Frantz broke loose, surprising themselves as they indulged in novel structures and textures. “Belly Of The Beast” is an astral waltz, while “Better Way” shifts from nimble harmonies to an acoustic drone. “Beautiful Flowers” is a particular highlight: A sparse elegy for a butterfly crushed by an car windshield that ponders industry and environmental degradation, it climaxes with funereal horns and Frantz’s affecting vocal.

Alongside the album announcement, Watchhouse also share the music video for “New Star,” a song about familial solidarity and self-sacrifice that is plain-spoken but vital. Directed by Sylvan Esso’s Amelia Meath, the video centers on the almost instinctual rituals of our lives that tie us to our various communities: children playing, friends sharing a cigarette, families gathering for dinner. After a year that forced many of us apart, it’s a reminder of the joys we are just beginning to return to and the strength we draw from each other.

“We’re different people than when we started this band,” Marlin says, reflecting on all these shifts. “We’re setting new intentions, taking control of this thing again.”

Sylvan Esso and Flock of Dimes at Ogden Theatre