Butcher Babies with Infected Rain, Stitched Up Heart, Purge The Heretics at The Oriental Theater
September 7, 2021
Photos by David A. Barber 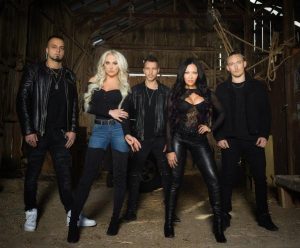 Butcher Babies began their headlining tour on August 28 and won’t stop until October. The ‘Butcher Babies Vs. Goliath’ tour will see the band perform their 2013 debut album GOLIATH (Century Media) in its entirety along with fan-favorites and new previously unheard music. The fully female-fronted lineup will include support from Infected Rain and Stitched Up Heart, with Kaleido also appearing on select dates. The band is working on an upcoming self-released EP which includes the singles “It’s Killin’ Time, Baby”, “Last Dance”, “Sleeping With the Enemy”, “Bottom of the Bottle” and “Yorktown”

For over a decade, BUTCHER BABIES have been crushing stages worldwide with their vicious live performance and explosive energy. Their stage presence is a hypnotic spectacle that leaves audiences hungry for more as they’ve displayed on tours among the likes of Megadeth, Rob Zombie, Marilyn Manson, Five Finger Death Punch, Danzig, In This Moment, Hollywood Undead, Cradle of Filth, Black Label Society and many more.

Hailing from the City of Angels, BUTCHER BABIES aided in the jubilant revival of the metal scene on LA’s iconic Sunset Strip, landing the band a record deal with Century Media Records.

Stitched Up Heart – My Demon

Posted in Videos Tagged with: My Demon, Stitched Up Heart

Stitched Up Heart at Herman’s Hideaway
November 13, 2019
Photos by David A. Barber

Posted in Live Photos Tagged with: hermans, Stitched Up Heart