Sleigh Bells with N3ptune at Gothic Theatre
October 17, 2021
Photos by David A. Barber

Today, LA-based incendiary rock band Kills Birds are sharing their introspective and impassioned new single “Cough Up Cherries,” the third offering from their upcoming, sophomore album Married, out via their new label home Royal Mountain Records and KRO Records on November 12th. The band have recently confirmed several tour dates with Foo Fighters and Sleigh Bells for 2021 and 2022. The new album was recorded at Dave Grohl’s Studio 606 by invitation of the man himself, and produced by Yves Rothman.

Vocalist Nina Ljeti explains “Cough Up Cherries” and says, “There are a lot of themes to Cherries, as it was written during the height of the pandemic in 2020. The song touches on feelings of loneliness, paranoia, and hopelessness that we all experienced. In addition, Cherries also addresses the identity crisis we all face in the digital age. What our performative personas are vs. who we really are when we’re left alone, and if in the midst of great injustice, we are actually able to hold our own selves accountable.”

Guitarist Jacob Loeb adds, “This song’s instrumentation reflects some of the layers of confusion and chaos that were felt by so many at the height of the pandemic. It’s music that we found at the apex of isolation and outrage. This song has a deeply ominous kick drum heartbeat that drives through the unnervingly twisted and interwoven guitar and bass parts that crescendo to a chorus that feels like an authentic expression of our collective rage at that height of that chaotic time. Bosh Rothman, who drummed on the record, brought some serious fire to the drum fills that close out the song.”

Sleigh Bells – comprised of producer/guitarist Derek Miller and singer Alexis Krauss – are thrilled to announce their sixth album, Texis, set for release on September 10, 2021 on Mom + Pop Music.  A new track from the album, entitled “Justine Go Genesis,” has been released today.  “Justine Go Genesis” was one of the first songs written for Texis; Miller sent an early demo of the song to Krauss in 2018, feeling excited about its ultra-fast tempo but slightly self-conscious about his cartoonish, over-the-top metal riff.  Krauss clicked with the music right away and wrote her bright, unabashedly poppy melody within a few hours of receiving the track, resulting in a song that sounds like the unexpected intersection of Metallica, Spice Girls, and ‘90s drum and bass.

The video for the track, shot on 16mm film and directed by Alex Ross Perry (Her Smell, Queen of Earth, Golden Exits) and Derek Miller with Cinematography by Sean Price Williams (Good Time, …Heaven Knows What), picks up where the band’s video for Texis single “Locust Laced” left off, referencing early 80’s horror films, The Twilight Zone, the band’s own incredible live show, and more. This is the band’s second collaboration with Perry and Williams, who previously worked on the video for “I Can Only Stare”.

Sleigh Bells and Tunde Olanirian at The Gothic Theatre 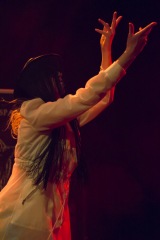 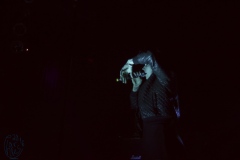