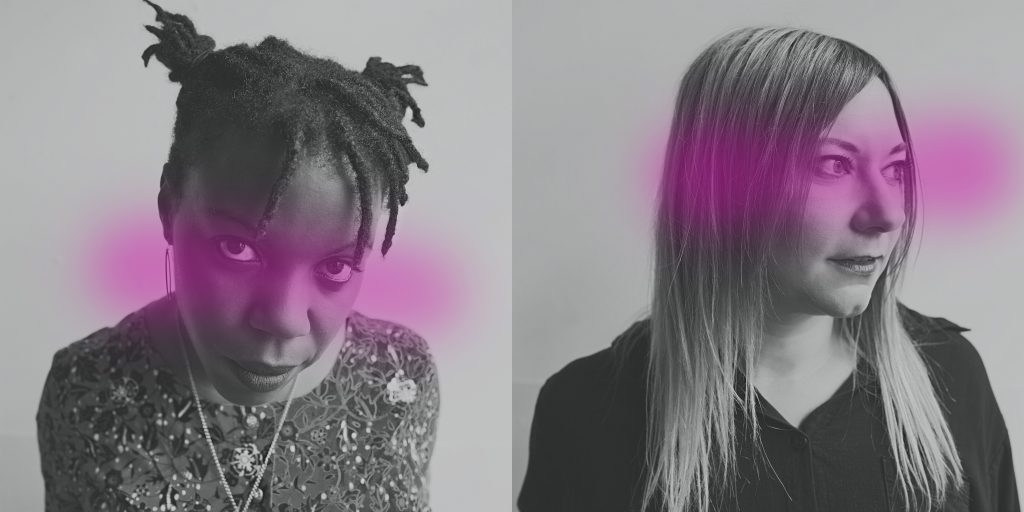 Sink Ya Teeth, Maria & Gemma, are a synth pop band from Norwich. They are signed to 1965 Records and have released singles including “Glass” and “If You See Me.” They are one of many acts at this year’s Loud Women Festival. FEMMUSIC was able to speak to them about songwriting, labels, and being women in the industry. For more info visit http://www.sinkyateeth.com/

GEMMA: We both write, record and produce our songs at home. Maria does the main bulk of the songwriting and producing, and often sends me a solid idea which I then add bass or perhaps a synth part to. Sometimes I come up with a drum and bass part ﬁrst and Maria might add a vocal and keyboard line to that. I really struggle with words so I leave all of that to Maria! !

FEMMUSIC: Tell me about 1965 Records. Why did you sign with them?

MARIA: Because they came all the way to a tiny pub literally in the middle of nowhere in Norfolk to watch us play! James and Mat who run the label are really nice guys who have been involved in the industry for many years. Their passion for music really shows through. Plus, they have Nadine Shah on the label and we love her!!

FEMMUSIC: Tell me about your single “If You See Me.” How did the song originate and develop?

MARIA: It was written the day after a party. It started oﬀ with a drum-beat and vocals, then this bass riﬀ kept going round in my head so I added that a bit later. It’s about feeling sorry for yourself because you overdid things.!We wrote our latest single, Glass, about a year and a half ago but Gemma remixed it a few months back. We love Giorgio Moroder and that late-seventies-early-eighties arpeggiated thing so we thought it would be fun to go for that vibe.!

FEMMUSIC: Are there any plans for an EP or album? Do you have a timetable?

GEMMA: Yep, we’ve just spent the summer writing, recording and producing songs and we now have more than enough for an album, so we’re currently putting that together and hope to release that and a couple of singles oﬀ it next year.

GEMMA: We feel lucky that (as far as we know) we’ve never been discriminated against for being women in the music industry. Maria and I have both been making music for a while prior to Sink Ya Teeth and have had some good opportunities presented to us. We’ve always worked hard for it though, as any band has to.!Norwich has a vibrant and healthy music scene which doesn’t favour men or women, gay or straight over each other, it’s about celebrating good music and supporting one another. !

Having said that, we really appreciate that gigs such as the Loud Women Festival and Gig Slutz oﬀer opportunities for female musicians to play in London. Out of the 4 gigs we’ve secured in London so far, only one was oﬀered by a male promoter which maybe says something? But you can’t categorically say that’s because we’re women. There are a lot of bands around that wanna play gigs, so you have to stand out as it’s very competitive.

FEMMUSIC: Whom would you most like to collaborate with, or tour with and why?

GEMMA: As a rule I don’t like to meet my heroes, and now and then I see my favourite artists play and don’t have the best time and it kinda ruins it for me, so I’m happy to tour with a band I don’t know that I can discover whilst touring with them. We had the best time playing a couple of shows with !!! (Chk Chk Chk) earlier this year, and I’d happily tour or collaborate with them! Lonelady would be cool to collaborate with too. !

MARIA: A couple of years ago I’d have said David Bowie in a shot.

GEMMA: There are and always have been a lot of frustrations with the music industry and it’s always changing so it never stands still. Which is not necessarily a bad thing it’s just hard to keep up! !One thing that does seem to remain the same is some of the shit that makes it into the mainstream and people are force fed through radio stations that just have about 10 songs on heavy rotation day in day out, brainwashing the listeners. Acts that get their kit oﬀ when playing live to try and distract from the abysmal ‘music’. The kind of acts that play at V Festival. !All very subjective of course 🙂 !

Posted in Interviews Tagged with: Sink Ya Teeth