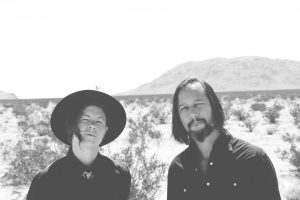 MOON is a duo made up of Chelsea Dawn on vocals and drums, and Dan Silver on guitars and synths. Dawn was born in a farming and mining town called Price; Silver was the son of British immigrants who landed in Cincinnati. They’ve been making their thunderous music since the release of debut The Heart, with a sound of electronically-enhanced incantations with songwriting to the fore, swarming around the radiant, poetic lyrical messages.

Shine is their new release, and it shows them taking Dawn’s majestic vocals, featuring a magnificent intensity and lush, brassy emotionalism, infusing their rich, lustrous range of sound into twisted eerie soundscapes upon mountainous sonic vistas perfect for their Southern California region.

Today they release the latest single from Shine, “Never Cross Me.”

Quote on the video from her “MOON transmissions’ video for “Never Cross Me” from their sophomore album, Shine, comes from the mind of visual artist, Robyn Antiga. Utilizing imagery that tells a story of devotion and piety, Antiga couples the bands desert rock tendencies with dark, thought provoking imagery. This video continues Shine’s theme of highlighting the influence that religious ideology has on humanity.”

Posted in Video of the Month Tagged with: Rews, Shine