May 21st, 2020
In 2017 we spoke with Shilpa Ray about her album Door Girl. We are excited to bring her new single with a video shot by Amos Poe.

Shilpa says, ““I wrote this song as an anthem to myself. It’s my ‘Eye of the Tiger,’ much like ‘Rebel Girl’ by Bikini Kill or ‘Edge of Seventeen’ by Stevie Nicks. I wanted to reclaim two derogatory phrases describing women/ femininity and combine them into something powerful. Nobody wants to be a pussy but everyone wishes they were a dream cunt. 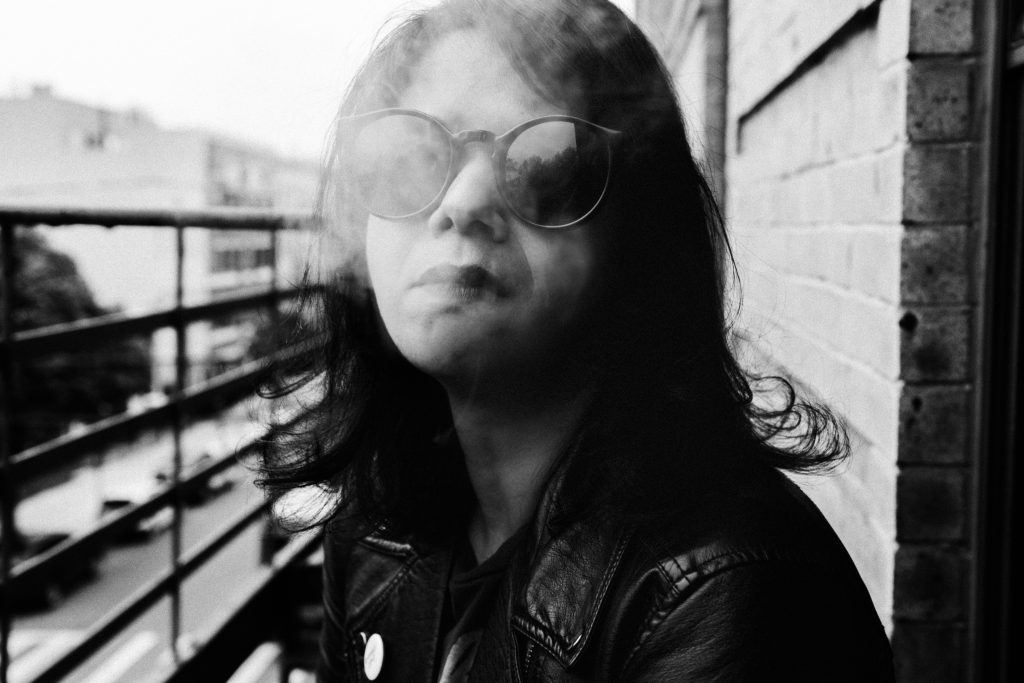 Shilpa Ray’s Bandcamp page doesn’t have a biography. It has a simple quote that says more about the artist. It is “Nobody grows up wanting to be an artist’s artist. Appreciated by the sub sect of the sub sect is like being the beauty queen at the leper colony.” https://shilparay.bandcamp.com/
Ray herself has a storied history that would make some be in envy. Her first EP It’s All Self Felatio was released on Nick Cave’s label Bad Seed LTD after she toured with him. Before that she 2 previous bands, Beat the Devil and Happy Hookers. She has opened for Patti Smith and Lenny Kaye.
On September 22 she released her 2nd full length album , Shilpa Ray as Door Girl. The album has a gritty realism to it that recalls some of “No Wave” era of NYC music. The spoken word opening to “EMT, Police and the Fire Department” is visceral. FEMMUSIC is honored to speak with her. For more info visit  http://shilparay.net/
FEMMUSIC:  Can you describe your songwriting technique? How has it changed over time?
SR: Maybe it’s more focused. Who knows?  I’ve always had to let things stew for a while before the work comes out. I definitely need a lot of alone time. I’m kind of like that with everything. I barely socialize unless I’m at work or practice.
FEMMUSIC: What was the biggest challenge making Door Girl?
SR: Making sure I wasn’t too jaded to make it. I wrote most of the material after getting off the road from Last Year’s Savage. I was broke and having to change line ups again. The process can get really draining.
FEMMUSIC: What was your vision in making Door Girl? How was that different from Last Year’s Savage?
SR: I wanted to say something about my life working as a Door Girl in NYC. I think the mixed emotions and observations that come with the territory are really interesting
FEMMUSIC: I’m curious to know about whom you worked with on the album. Who were you most looking forward to working with? What stuck out for you in production?
SR: I had a blast working with Jeff Berner at Studio G! The sounds were so strong and our recording sessions were magic. It was hands down the best winter I spent in Brooklyn. Brooklyn winters tend to be gross and depressing.
FEMMUSIC: Shilpa Ray Stars As Door Girl is the full title. I was curious about the title. When you say “stars as” it implies putting on the persona. Do you take a persona in the studio? on stage? Can you describe that person?
SR: That was a joke to myself. I put on a pretty aggressive persona at work for sure, but at the same time it’s a part of me. I am surly and tough. I am a brown person born and raised in New Jersey. I’ve been fighting assholes all my life. I guess I use what’s left of my brain in the studio and in writing too. 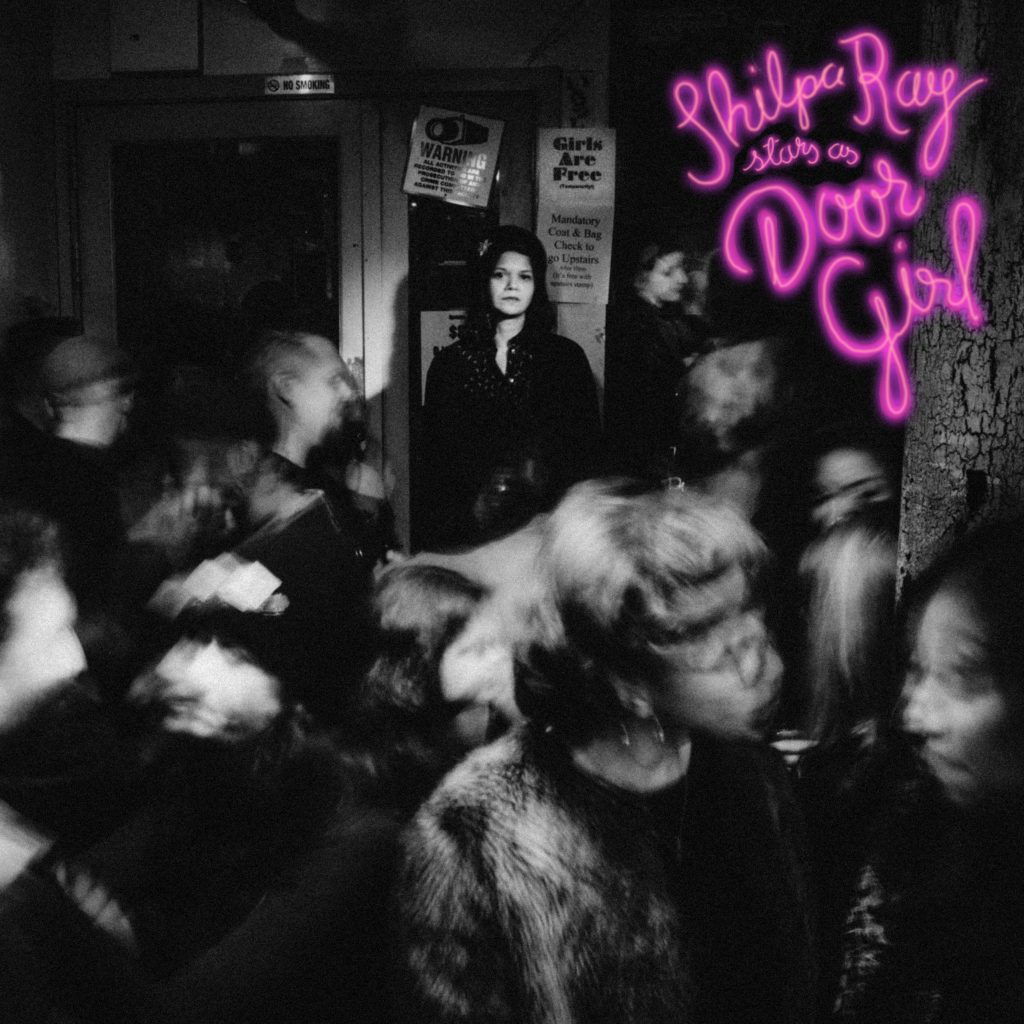 FEMMUSIC:  The role as Door Girl caught me at the right point. I’ve recently been doing some editorials about themes like “fight like a girl” and “not the merch girl.” I’ve worked as an usher and coat check. There are certain jobs that are both the entryway to the world, that also have built in stereotypes. I was curious about what you thought when you worked as a Door Girl and what the job means to you now?
SR: It’s wild. One minute I’m standing next to Andrew Bird, singing a duet at Carnegie Hall while the next, I’m throwing out some wasted entitled 22 year old dressed in a Santa suit for calling me an ugly fucking bitch while refusing to pay a cover charge. I find this duality hysterically funny and also revealing of the human conditon. A job is a job. They all have upsides and downsides. My door girl job helps pay my bills and allows me to tour and work with an awesome staff. I have no complaints.
FEMMUSIC: I’ve recently started research on a possible larger story involving Gender Neutral Booking. It based upon the experience of some friends who changed their band name from something feminine (including a woman’s name in the band name) to something gender neutral. They saw their bookings increase because of it. Have you seen other artists who have different bookings because their band name is gender neutral? Your previous projects did not include your name. Now you are Shilpa Ray. Do you have an opinion on whether this might be a bigger issue in the industry?
SR: I used my name in order to establish who was in charge, since internally most people, male and female in the industry will give credit to guys for songwriting, arrangement and production over a woman. It still doesn’t work though. No one believes Shilpa Ray is my real name and just assumes it’s some pretentious boho band name with significant hidden meanings only a student at Bard College can uncover. I can’t wait to know what these findings are.
FEMMUSIC: As a woman in the music industry have you been discriminated against?
SR: Of course. As a woman of color it’s even worse. Oh well. Gotta keep working.
FEMMUSIC: Whom would you most like to collaborate with or tour with, and why?
SR: I’m not sure. There’s a lot of people I’d like to work with but those things happen when they happen, so I tend not to think about them anymore.
FEMMUSIC: What one thing would you like to change about the music industry?
SR: How musicians get paid. It’s pretty dismal.