Last year, illuminati hotties released one of their most beloved records of the year with Let Me Do One More.

Today, Tudzin is back with a new single “Sandwich Sharer.” A standalone track released in time for her first official headline tour for the album. She tells us “‘Sandwich Sharer’ was very much written at the precipice of unknowns – I was seeking a teammate at a time where I felt swayed by nostalgia for youth as opposed to the reality of the momentum of life. And it feels so good to be close to someone who knows you so well it’s like you finish each others’… sandwiches.”

Posted in Videos Tagged with: illuminati hotties, Let Me Do One More, Sandwich Sharer, sarah tudzin

Ramonda Hammer– All For What

Today, the Los Angeles-based grunge ensemble Ramonda Hammer share “All For What,” their first track of 2021 alongside a video directed by Kelly Reed. “All For What” was produced by Sarah Tudzin (aka illuminati hotties), who has an incredibly innovative and quirky sensibility for songwriting and production. “Working with Ramonda Hammer is non-stop fun!” Says Tudzin. “They always roll up to the studio with energy, a powerful song, and lots of snacks 🙂 In the case of ‘All For What,’ Andy & Devin had a killer riff based around big major7 chords that made this song particularly unique, it lives in the liminal space in which we all get stuck when we’re too deep in the phone zone.” 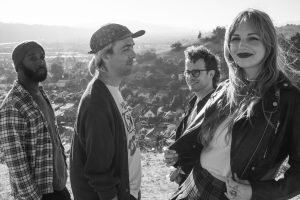 “‘All For What’ is a reflection on social media and the frustrations, mental health struggles, and sometimes sheer confusion that come along with it,” says Davis. “It’s not meant to be a critique on others and their use of it, it’s simply my sigh of acceptance and surrender as I think to myself  ‘if you can’t beat ‘em, join ‘em.’” @ramondahammer

Anyone paying attention to illuminati hotties over the past few years will know it’s been a rollercoaster to say the least. Through it all, the band’s fearless leader Sarah Tudzin has risen from the ashes and is about to deliver the band’s most exciting record yet.

Today she is announcing her own brand new label Snack Shack Tracks, in partnership with the Los Angeles-based independent label, Hopeless Records. Releasing her new album on her own label felt like a natural next step after what she had been through previously.

“I’m incredibly stoked to be partnering with Hopeless Records on my own imprint, Snack Shack Tracks!.” Notes Tudzin “With everything that has brought me to where I am, I knew that the next time around I needed to seek support from folks who trusted me – who believed not only in illuminati hotties, but also in myself, and my curative vision as a creator at large. Hopeless is the perfect collaborator for IH and beyond. I am thrilled, grateful, and looking forward to an expansive future for the music that we’re all total nerds about!”

After the success of her debut album, Kiss Yr Frenemies, and coining the term “tenderpunk,” illuminati hotties were on their way to recording and releasing a highly-anticipated sophomore album. However, things with their previous label started to fall apart, and illuminati hotties found themselves stuck in a contract with a label who didn’t have the infrastructure to put out the album the band had been crafting for months. “It felt like any momentum came to a screeching halt. It felt painful to pick up a guitar, to write, to record any loose ends that needed to happen to wrap up the album,” Sarah recalls.

With the emotional turmoil and uncertainty building over the label situation, Sarah turned her focus to a new batch of songs that would become FREE I.H. Funneling all the raw feelings and letting go of any inhibitions, illuminati hotties released the collection of songs, carefully not defined as the “new album.” The critically-acclaimed, fan favorite, release closed the chapter on the label drama, and opened up the band musically to a whole world of possibilities.

Alongside the new label announcement illuminati hotties are also giving fans a sneak peak sharing new music in the form of “MMMOOOAAAAAYAYA” (pronounced MOO!), solidifying the ushering in of a new era for the band.

“The springboard for the ‘MMMOOOAAAAAYAYA’ video pays tribute to the iconic music video for D’angelo’s ‘Untitled (How Does It Feel)’ while demanding space for the subversion of male sexuality and flipping the dynamic of power throughout its three slimey minutes.” Tudzin adds. Though similar at first, illuminati hotties’ version offers a very viscous twist. Halfway through the track, as the angular guitars and driving drum groove dismantle in discord away from the catchy chorus of “mmms,” “ooos, “aaas” and “ya yas” and into the track’s second act, rivulets of goop begin to rain down on Tudzin. The mucous oozes from an unknown source above Tudzin as she croons along casually, unphased and at times, even laughing at the source of it. The video serves as a cautionary reminder to all of those who would like to even think about projecting their bullshit onto her – don’t.