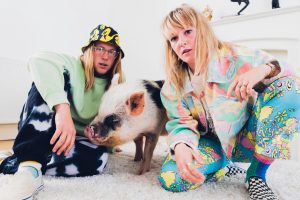 Penelope Isles, the project of UK-born and bred siblings, co-songwriters and co-vocalists Lily and Jack Wolter, will release their sophomore album Which Way To Happy on November 5th, and today they share one final single before the record is out. Album highlight “Terrified” follows previous tracks “Sailing Still,” “Iced Gems” and “Sudoku,” and is a reflection on anxiety set to a dreamy sunburst of psychedelic jangle-pop.

As frontman Jack Wolter explains: “It’s about those days when you’re dying inside but have to pop out to the shop, bumping into someone, having to put on a magic show, pretending to appear that everything is OK. It’s a song that has such a happy-fun-summery exterior but lyrically is totally the opposite. It’s one of self-doubt, displacement and finding something really terrifying to handle. Sometimes we hide a lot behind ourselves. ‘Terrified’ was an outlet for me to be able to tackle scary thoughts and worries in more of an abstract way. Things can seem impossible to talk about and articulate sometimes. I feel that making this album has enabled me and my sister Lily to open up a lot more and be honest with our songs as it just makes them so much more real.” @penelopeisles

Penelope Isles, the project of UK-born and bred siblings, co-songwriters and co-vocalists Lily and Jack Wolter, released their self-produced debut album Until The Tide Creeps in in 2018 on Bella Union. Today, on the heels of announcing an extensive UK tour for this Fall, the band shares the first taste of their forthcoming, not-yet-announced sophomore album.

“Sailing Still” is out now, alongside a captivating video directed by Jack. He explains, “Before the enforced break due to COVID-19, we spent pretty much all of 2019 driving ourselves around Europe and America having some incredible adventures as a band and it seemed that everything since then had been falling apart. Writing and recording new music as a huge part of the recovery process and when making this film for ‘Sailing Still’ I wanted Lily and I to get back on the road somehow, as travelling has been such a massive part of our band ever since we began. So I had this idea of filming Lily in a myriad of places and scenarios, both urban and rural, coastal and inland. Mountains and rivers, council flats and tunnels, cafes and bridges. We drove up and down the country for a week, sleeping in the van, and waking up at the crack of dawn to start filming again. Reconnecting as a band again but also spending time together as brother and sister was special for filming this real heartbreaker of a song.”