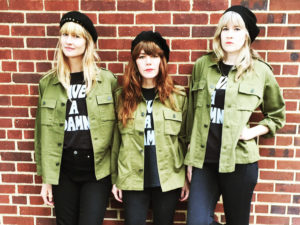 2016 has been a busy year for Jenny Lewis. In February she announced the formation of her record label, Love’s Way Records. In March she began touring with NAF. In August she will be touring solo. In September she starts touring with The Watson Twins in honor of the 10th Anniversary of Rabbit Fur Coat.
What is NAF? NAF is Nice as Fuck. It is a 3 piece band with Lewis on keyboard, and vocal effects ,Tennessee Thomas on drums, and Erika Forster on bass. Thomas is formerly of the band The Like. Forster is known as being one of three parts of Aur Revoire Simone. In a departure from her other projects, Lewis does not play guitar in NAF.
Tonight’s show was both intimate and crowded. It was held at the DBG stage which is sunken in and surrounded on 4 sides by grass. This area is filled in by the crowds who bring wine, picnics and an appreciation of music. The VIP area faces the stage.  NAF were preceded by the theme song to Jemm and the Holograms. They came on stage and immediately began singing. A couple of songs in Jenny introduced Tennessee. Tennessee then introduced “Cookielips.” “Cookielips” is a song not found on the NAF album and is about getting the crumbs in a relationship. The rest of the show consisted of all the songs from the album including “Higher”,” Angel”, and the single “Doors.” Lewis moved around the stage and even lay down for a moment during Higher. She was smiling the entire set.
The set ended upbeat. NAF did “Guns” with Lewis trying to get the audience to sing along to the chorus of “I Don’t Want To Be Afraid/ Put Away Your Guns.” It is an apt statement for today. NAF ended with the NAF theme which is a great excuse to swear onstage but also has a strong women’s theme. NAF has a dream pop feel and is dominated by Lewis vocals that have always stood out. For info visit https://www.facebook.com/NAFtheband/ 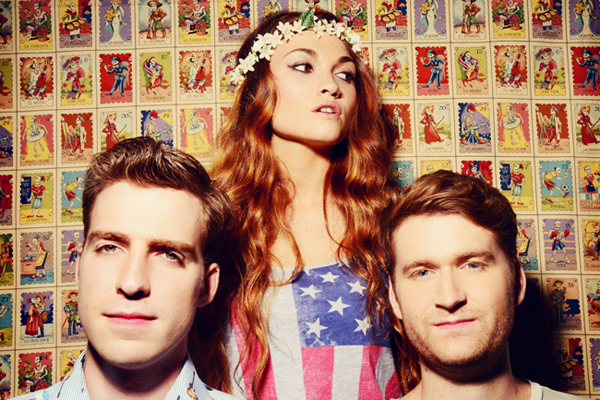 A half hour before doors a line of 100 people waited outside the theater. The majority were near the minimum age to get in, 16. They were texting, talking with friends, etc… If one listened carefully a whisper could be heard. “Is she alright?” “She missed some tour dates.” “What will happen tonight?” The questions hung in the air.

The openers varied. Handsome Ghost is a two piece from Boston doing a mellow emo folk. All the songs were ballads and were sung in a slow, purposeful manner. Borns is an LA five piece with strong songs and an intimidating stage presence. He stands well over six feet tall.

Then it was the moment of truth. The questions would be answered. Mandy Lee, lead singer and bandleader of Misterwives had missed two tour dates due to illness. She was back tonight. Lee bounced onto stage and dived right in. In the hour fifteen minute show she rarely stopped moving while singing songs from the band’s full length album Our Own House.

The band is a cohesive unit. They are Eitienne Bowler on drums and percussion. William Hehir on bass. Marc Campbell on guitar. Jessie Blum on trumpet, keyboards & accordion. Not given big credit in the album credits is Michael Murphy on saxophone. In the tour he plays a vital role. Murphy and Blum make a bold horn section and turn this rock band into a more seasoned Motown sound.

Misterwives played most of the songs on the album and never lost energy. “Ocean” had a brilliant light show of blue and green that fit this ballad perfectly. “Not Your Way” began with Lee doing push ups while talking on stage. She said the song was for “Society setting standards for women…and men that are BS.” Most of the band did chorus line kicks in unison at one point in the song. “Reflections”, one of the main singles, Lee credited the local radio station for playing it. “Hurricane” began with a wondrous keyboard intro. “Queens” came near the end of the set and began with Lee saying she may not feel physically well, but was mentally awesome. The encore is an amazing number which has to be seen live. We won’t give it away.

Lee is a ball of energy on stage. Tonight she was not at full health. There were times when her voice was hoarse and felt strained. During “Not Your Way” she squirted honey into her throat. During the last couple of songs she did have a small cough.

Misterwives is a Motown infused rock band on stage. This is not as  evident on the album. They play with non-stop energy that is never boring. Lee was out. Now she is back and needs to get stronger for the shows ahead. For info visit www.misterwives.com