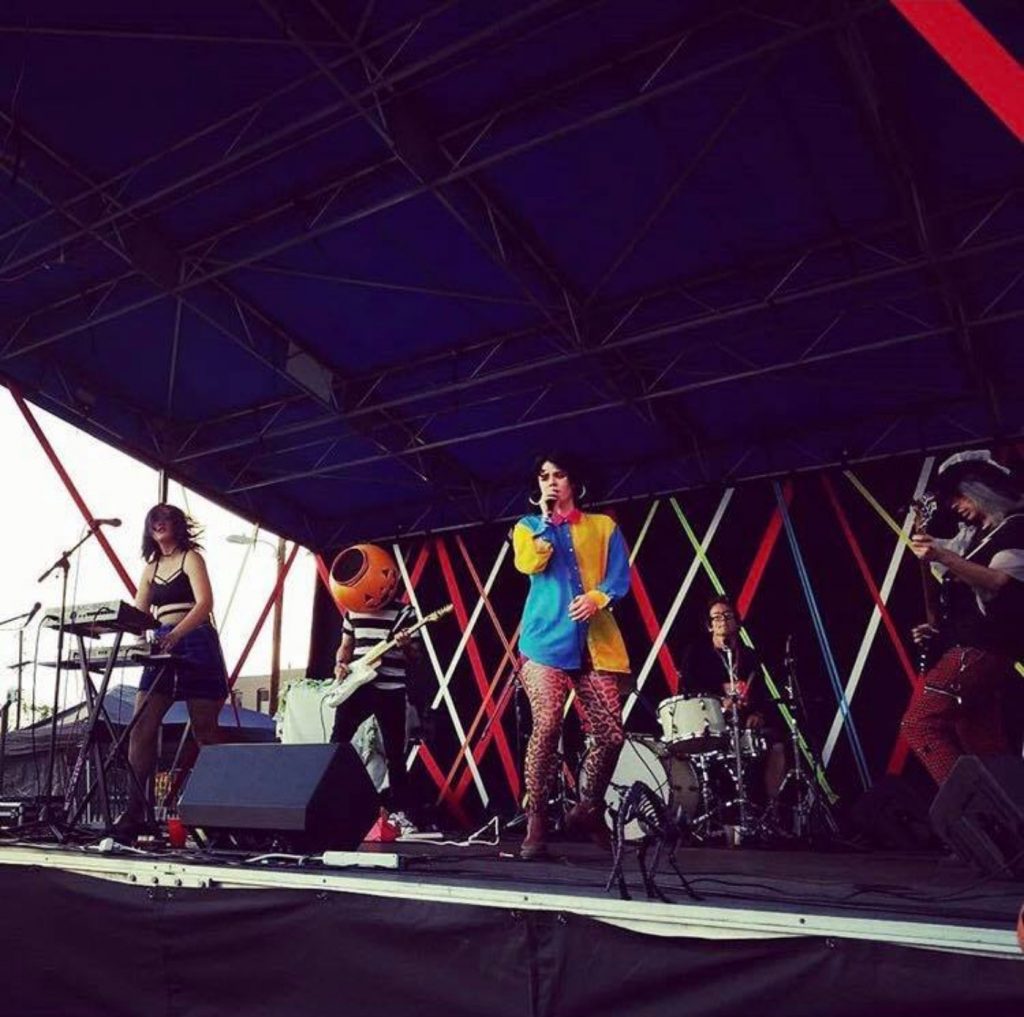 GLASSS Records
Amanda Gostomski
Princess Dewclaw is a band to be experienced not watched. A clash of art rock, glam rock and alternative with the fronting performance of Amanda Gostomski. Princess Dewclaw has one album out called Walk of Shame, and is working on its sequel.
In addition to Princess Dewclaw Gostomski is co-founder of Glasss Records, an independent label with a growing roster of artists in all genres including RAREBYRD$, Pearls & Perils, and Gold Trash .TheGlasss Records label is a collective where cross pollenization is having from studio to stage.  Glasss Records has been doing Glasss Records Presents shows all year which showcase their artists to a wider audience. For info visit http://www.princessdewclaw.com & https://glasssrecords.com/
FEMMUSIC:  What was the biggest challenge making Walk of Shame?
AG: Having the ability to play an instrument. Half of Dewclaw came into the band with never having picked up an instrument to play. So having the patience to learn how to play, write a song, and listen to each other, while having a fully formed vision that had to go on the back-burner. Like we could hear the songs and we could describe what we wanted but we didn’t have the ability to produce the vision.
Honestly, our new album that we are working on will be much closer to what we collectively heard in our heads.
FEMMUSIC: Tell me about Princess Dewclaw. How did the band form? Do you get into a persona to go on stage?
AG: Amanda Baker (synth player and vocals, Brandon Reyes (guitar player), and myself wanted to start band after seeing so many lackluster performances. Also, a bunch of guys kept telling me that I couldn’t. A lot of my personal motivation comes from proving men wrong.
Then Will Schaaf was asked to join cause of his musical talent and bright-eyed enthusiasm. We have had the “drummer problem”. Each one of three has brought their flavor to the band. Vahco Before Horses has now filled the role. His intensity (passion and machine-like rhythm) has been pushing us to grow.
When I am on stage, my persona is just myself exaggerated. I try to always perform with a raw and true emotion. An authenticity of feeling is important to me as a front person. 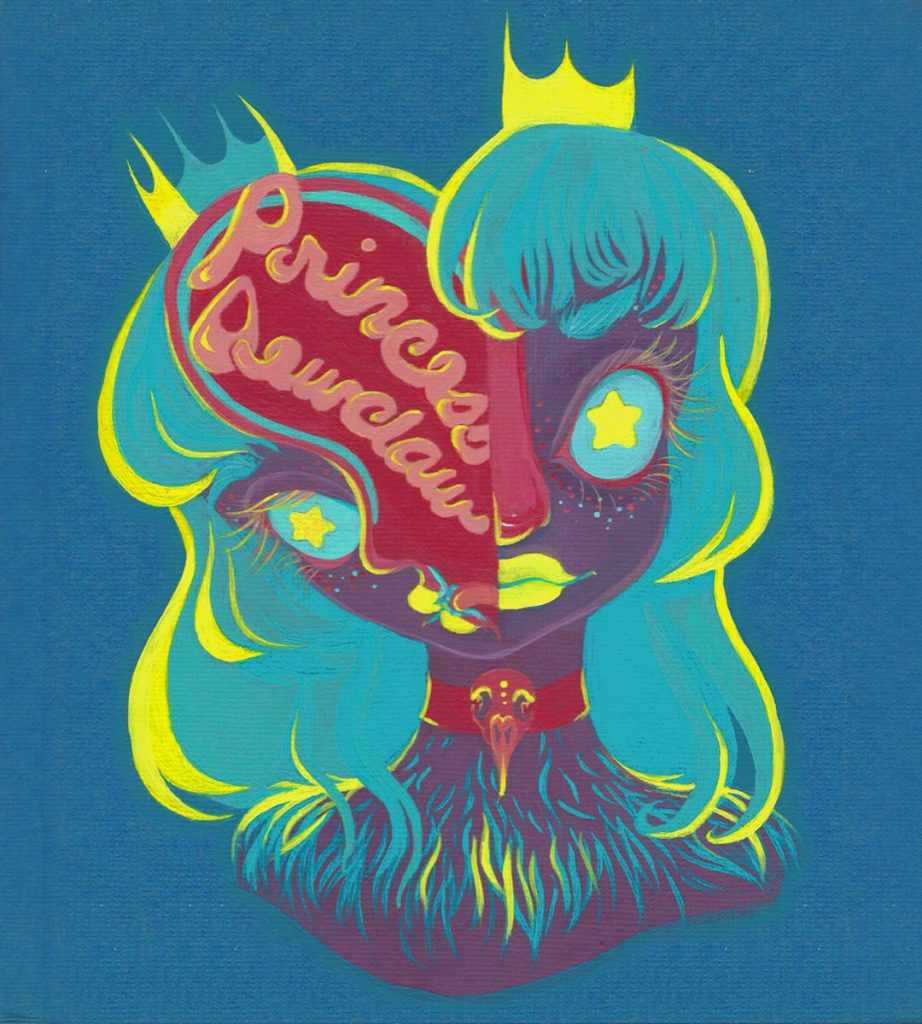 FEMMUSIC: I understand you met Vahco Before Horses in 2016. What made you decide to work with him on both your own album and forming Glasss Records?
AG: Vahco is a builder. He is also obsessive and a workaholic. A perfect partner in any venture. When I feel too exhausted to put out any more creative pursuits, he’s conjuring up the next show, the websites, the tours, the zine, etc.
I’m a burst of energy and I burn out real fast.
I felt like Princess Dewclaw was over, and he got us into an abandoned school house and we recorded an album with him.
I have a lot of ideas that could of just died, but Vahco made them into Glasss Records.

FEMMUSIC: Glasss Records has so many areas of collaboration and overlap. What was your vision for the label?
AG: Musicians cannot just be musicians in 2018. You need to be a visual artist, a website designer, a filmmaker, etc. in order to stand out and to sell your music. I wanted to bring together a group of musicians/artists so that they could commiserate over the pressure, and eventually collaborate through any obstacles.
FEMMUSIC: I’ve been noticing a lot of Glasss Records’ Presents shows at various venues. Tell me why you wanted to do them? What do you get out of them?
AG: A lot of venues will not ask an artist they are not familiar with to open for a national  touring act. You have to get through that door to even open. By using Glasss’ name we are able to bring visibility to artists who may of only been able to play the underground scene or are just newer, working on their craft.
FEMMUSIC: It is one thing to be an artist and bandleader, in running the label, you’re also signing other bands. What do you look for in signing a band? What are your criteria?
AG: Pro-active artists. You need to know what you need to do and what you may lack. And be actively pursuing ways to better your art, and to put it out there to the best of your personal ability. That to me is more important than talent.
FEMMUSIC: Can you describe your songwriting technique?
AG: I write lyrics that fit thematically into a larger narrative. Walk of Shame‘s song loosely base around a teenage girl who gets attacked and changed into a werewolf; think Gingersnaps, the Canadian horror film. We used the theme to even choose textures and scales to write the songs in.
FEMMUSIC: What song (not your own) has had the biggest influence on you and why?
AG: “Not in Lov” by The Crystal Castles Feat. Robert Smith. Just the simplicity of the concrete lyrics makes me super melancholic. Alice Glass is good at writing deceivingly simple lyrics.
FEMMUSIC: As a woman in the music industry have you been discriminated against?
AG: There are external pressures that I have internalized from our culture that have held me back. I was really worried about being a shitty band cause then I would let all of fem-kind down. But I was able let that go real fast, and be okay with sucking for a while. More fems need to be okay to be in a beginning band and not worry about have that pressure to be the best, the prettiest, the most political. Shitty guy bands saturate the scene, and we give them the time to develop. When you’re in a band with fems, more eyes will be on you and people will want you to fail. Just keep sucking in spite of everyone.
FEMMUSIC: Whom would you most like to collaborate with, or tour with? Why?
AG: HMLTD. They are the future of rock music.
FEMMUSIC: What one thing would you like to change about the music industry?
AG: More fems working in venues; talent buyers, sound people, door staff, bartenders, etc. It would make the environment more comfortable. A lot of times it’s all men with one fem on staff when we are touring. The numbers need to change.

The Beginners with Bluebook and Princess Dewclaw at Hi-Dive

The Beginners with Bluebook and Princess Dewclaw at Hi-Dive,
May 6, 2017
Photos courtesy of RockOnColorado.com 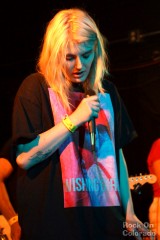 Princess Dewclaw at Hi-Dive May 6, 2017 Photos courtesy of RockOnColorado.com 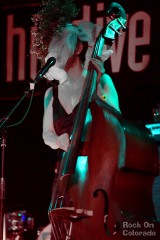 Bluebook at Hi-Dive, May 6, 2017 Photos courtesy of RockOnColorado.com The Beginners at Hi-Dive, May 6, 2017 Photos courtesy of RockOnColorado.com 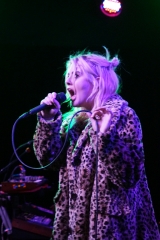 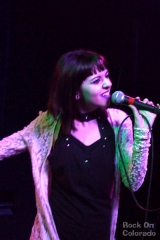 LaRissa Vienna and the Strange 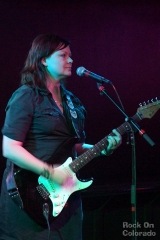