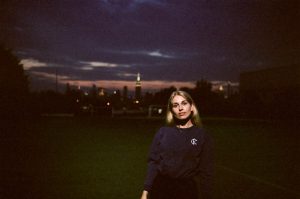 Québécois artist MUNYA – a.k.a producer, singer, songwriter and performer Josie Boivin – recently announced her long-awaited self-written, self-produced and self-recorded debut album Voyage to Mars, which will be released on November 5th via Luminelle Recordings. Today she shares another taste of the forthcoming record with the surprising and stunning cover of The Smashing Pumpkins “Tonight, Tonight.”

Of the track, which follows the previously released “Pour Toi” and “Cocoa Beach,” Boivin says, “My sister shared the ‘Tonight, Tonight’ video with me at a very young age, I vividly remember feeling certain emotions for the first time: longing, sadness and a hopeful melancholy. In a weird way it was also my introduction to exploring space and the infinite possibilities that humans can achieve if they embrace the urgency of now. With everything going on, I felt like it was time to share my love for this song and hopefully inspire a new generation to realize life is a galaxy of endless possibilities, as long as we don’t hesitate and act now.”

Québécois artist MUNYA – a.k.a producer, singer, songwriter and performer Josie Boivin – will release her debut album, Voyage to Mars, on November 5th via Luminelle Recordings. Following her masterful EP trilogy that was released in its entirety in 2019, MUNYA started work on her debut album. With a background in opera and jazz, MUNYA has always had two big dreams: to be a musician, and…to go to Mars. “I love space. I love aliens. I love thinking that we’re not alone in this big strange universe,” she says. “Those things give me hope.” That hope led to Voyage To Mars, named for Georges Méliès’ classic silent film Le Voyage dans la Lune. Filled with songs that feel beamed in from another world and suffused with an otherworldly light, this record was written, produced and recorded by Boivin.

To celebrate the announcement of Voyage To Mars, MUNYA shares lead single “Cocoa Beach” today. The lilting song with palm-muted guitars and a driving funk beat is named for the town fifteen miles from the John F. Kennedy Space Center, and Boivin explains, “Cocoa Beach is a song about being fearless, about finding your inner force and embracing failure as your path to happiness. It’s about pushing yourself over your limits and accomplishing the impossible through sheer force of will. It takes courage, dedication and many failures to reach your dreams…and that is the origin story of MUNYA.” The new music video for “Cocoa Beach” is a direct followup to her last French single “Pour Toi,” a song that found her speaking to someone far away.

Québécois artist MUNYA – a.k.a producer, singer, songwriter and performer Josie Boivin – is back today with a gorgeous new single “Pour Toi,” sung in French. The track and its accompanying music video follows a string of singles she has released since her self-titled EP trilogy was released in 2019 via Luminelle Recordings.