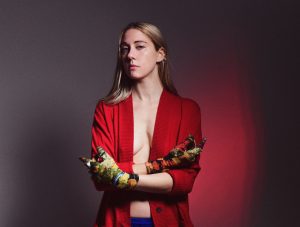 TORRES (moniker of Mackenzie Scott) announces her new album, Thirstier, out July 30th on Merge Records, and a North American and European tour. In conjunction, she unveils the album’s first single/video, “Don’t Go Puttin Wishes in My Head.” Thirstier, the follow-up to 2020’s Silver Tongue, is Scott’s most exuberant and daring record to date, showcasing her in thrilling freefall. “I’ve been conjuring this deep, deep joy that I honestly didn’t feel for most of my life,” says Scott. “I feel like a rock within myself. And I’ve started to feel that I have what it takes to help other people conjure their joy, too.” The album revolts against the gray drag of time, a searing and life-affirming eruption of an album that wonders what could happen if we found a way to make our fantasies inexhaustible. Thirstier explodes the borders of imaginative possibility.

Recorded in the fall of 2020 at Middle Farm Studios in the UK, Thirstier marks a turn towards a bigger, more bombastic sound for TORRES. The anxious hush that fell over much of Scott’s previous music gets turned inside-out in songs tailored for post-plague celebration. Scott co-produced the album with Rob Ellis and Peter Miles, drawing on her experience self-producing Silver Tongue to push her music onto an even broader scale. Guitar-driven walls of sound, reminiscent of producer Butch Vig’s work with Garbage and Nirvana, surge and dissipate like surf in high winds, carrying Scott’s commanding voice to the fore.

“I wanted to channel my intensity into something that felt positive and constructive, as opposed to being intense in a destructive or eviscerating way,” Scott notes. “I love the idea that intensity can actually be something life-saving or something joyous.”

Thirstier Tracklist
1. Are You Sleepwalking?
2. Don’t Go Puttin Wishes in My Head
3. Constant Tomorrowland
4. Drive Me
5. Big Leap
6. Hug From a Dinosaur
7. Thirstier
8. Kiss the Corners
9. Hand in the Air
10. Keep the Devil Out

This massive sound and celebratory mood is evident in lead single “Don’t Go Puttin Wishes in My Head,” a sparkling country romp. Bolstered by glistening synth, it’s a defiant yet disarming number that sees Scott singing of a love that knows no bounds, while sharing her vulnerabilities with remarkable candor. Its charming video was shot in Scott’s apartment with her partner. In her own words, it’s “my relentless arena country star moment—my shameless Tim McGraw cheeseball hit.”