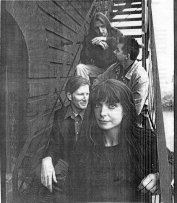 Another project is Persephone’s Circle in Seattle. Made of seven independent artists, Persephone’s Circle has done everything from rotating shows with three to four artists, to benefits for HOME ALIVE and Real Change, and is in the process of finishing their compilation CD.

Persephone’s Circle is led by the dynamic artist Willow. Willow’s music is a dream given form. Using a beautiful combination of guitar, violin, bass and percussion, Willow’s music enraptures the listener. There are few artists for whom the dictionary doesn’t hold enough words to describe. Willow is one of them. FEMMUSIC.com was recently able to interview Willow, and this is what she had to say:

FEMMUSIC.com: How did you come up with the name Persephone’s Circle?

Willow: Persephone was the daughter of Demeter, the goddess of the harvest, who was kidnapped by Hades and forced to spend half of the year in the underworld causing the barren season. During the other half she was allowed to romp the earth bringing each Spring and Summer!

FEMMUSIC.com: Why did you start Persephone’s Circle?

Willow: I started Persephone’s Circle with idea of being actively and intimately involved in promoting and supporting fellow female musicians….

FEMMUSIC.com: Tell me a little about each artist?

Willow: Although each woman plays acoustically, the style of music in Persephone’s Circle ranges from introspective piano to beatnik-jazz….

2. Aiko Shimada – Aiko Shimada’s music is like water…her voice and words are round and lingering, deceptively simple, complex restraint, jazz based Japanese folk.

3. Nancy Colton – Nancy Colton’s songs of hope and survival make you feel lucky she shared. She is one of those few women who is as real as her music. She has a percussive style of guitar playing and a strong, sweet voice.

4. Katy Chorover – Katy Chorover embodies folk! Her songs of change, environment, little man vs. corporate corruption are carried through with heart. A voice that has lost a nostalgia.

5. jr – jr pulls you in and slows you down to a velvety groove. Her full voice and lazy-blues guitar fold over well crafted words of home and dreams and angels. Once you are entangled in her music you never want to leave.

6. Rebecca Pearsy – Rebecca Pearsy’s songs are music from the pages of life. Her dreamy voice trips over words that weave into tangible emotions that everyone has felt.

7. Willow – and then there is me. I hate to describe my music. So since you’ve heard it, I’ll let you take a stab at it! (See description at beginning of article.)

FEMMUSIC.com: What are your goals for Persephone’s Circle for the future?

Willow: To further our music. Get it out there…be successful artists. Everyone’s definition of success varies of course, but I guess I mean to be able to take my music, as well as the women in Persephone’s Circle’s music, to its full extent.

FEMMUSIC.com: What have been your biggest challenges with Persephone’s Circle?

Willow: Because Persephone’s Circle is small, we are a pretty easy self-contained unit and there haven’t been many huge hurdles.

Probably getting our live CD out has been the most challenging in that I don’t want to put out anything I’m not 100% happy with…or at least 99.9% happy….

FEMMUSIC.com: How do you determine which charities will benefit from Persephone’s Circle shows?

Willow: I am careful about what my name is attached to. The charities that we have been involved with are ones that I can see the changes that they are making. Ones that I know where our money and work are going to.

HOME ALIVE is a non-profit organization that was started in reaction to the brutal rape and murder of Mia Zapata, a female Seattle punk musician. HOME ALIVE was founded by a group of musician and artist friends that teaches self defense and awareness.

Real Change is a non-profit organization that helps the homeless learn computer skills, write for a paper, etc…

FEMMUSIC.com: What role does Persephone’s Circle, and similar projects nationwide (including Women from Mars, Voices on the Verge, etc.) create for music and the music industry as a whole?

Willow: I think it promotes a community based support group of for artists versus an “us against the competition” type of thing. It helps musicians become dependent on each other. I think that’s one of the reasons why so many of us have started our own labels…so we can be in charge of truly knowing what happens to the music!

FEMMUSIC.com: What is your opinion of the music industry, and what would you like to see improved?

Willow: That is a loaded question. The business part of this has always seemed kind of shitty to me. I guess I don’t naturally have a business desire. I don’t ever want to bite the hand that feeds me, but the industry seems rather commercial and cut throat. Sometimes it amazes me what gets airplay and what doesn’t! But I would like to think a lot of that is changing and will continue to change with more artists involved…like Persephone’s Circle and some of the others we’ve talked about…

Now that the so labeled “year of the woman” has been hyped up and opened up, I would like to think the next step could be the “year of the musician.” Strength and publicity for women as well as men. Is that too much of a dream? Equality? hmmmm.

FEMMUSIC.com: What advice would you give to emerging women artists?

Willow: I know it sounds trite, but stay totally true to how you feel your music should be. There will always be people out there who will tell you “if your music was a little faster,” “if you were just a touch more pop,” “if you were blond, wrote happier songs, played more this or that, etc..”, but only you know how or where you want to take your music, and if you stay true to yourself, I believe the audience will come! There again, that is why a lot of people start their own labels.

FEMMUSIC.com: If you had a million dollars, what would you do with it?

Willow: Pay off my student loans! Finish the final touches on my CD Grieves and Moans and throw the rest into my music and the music of Persephone’s Circle! It would be fun!

FEMMUSIC.com: What else would you like to say to our readers?

Willow: I guess thanks for the support and interest in women’s music. There are so many incredible musicians out of the commercial realm that are worth seeking out. Hopefully people will find I may be one of them!

Willow & Persephone’s Circle can be reached at: