Critically acclaimed singer-songwriter Catie Turner has unconventional motives to exact psychological torture on her ex by stealing his dad in her new music video for her most recent single, “Step Mom.” The quirky and playful video was directed by Joe DeSantis.

Singer/songwriter Miki Ratsula stars alongside Catie, playing both the role of Catie’s ex and his dad, sporting a variety of comical costumes and wigs, including a silver fox mustache. Catie performed the song throughout her recent tour with Léon and it quickly became a fan favorite. See photos from the tour here.

“The Step Mom video was so much fun to make,” says Catie. “Huge thanks to Miki Ratsula for donning the mustache to make my twisted, dad-stealing psycho fantasy a reality.” 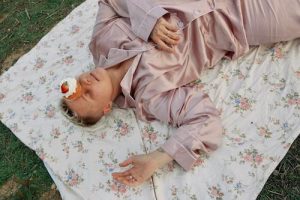 Miki Ratsula has built a sizable audience by openly and honestly welcoming people into their world and is set to release their debut album i owe it to myself on March 25 via Nettwerk Records – a deeply intimate record that touches on mental health, loss, love, and everything in between. The album from the Southern California-based nonbinary singer, songwriter and producer is an acoustic pop dream guided by Miki’s lush, lofi-inspired production that captures the full emotional seesaw that rocks between youth and adulthood. Today, they have shared details on their first national tour where they will be a support act for friend and collaborator Lauren Sanderson. See all dates below.

They recently shared “sugarcane,” their latest single celebrating the effortless joy of love, and features their friend and occasional songwriting partner, Los Angeles-based musician Dana Williams. “‘sugarcane’ is about the type of love that is just as enjoyable and as effortless as eating your favorite dessert. You can’t believe something so good can exist, and you just can’t get enough of it,” notes Ratsula.

Posted in Previews Tagged with: Dana Williams, i owe it to myself, Miki Ratsula, Nettwerk Records, Sugarcane