The accompanying video, directed by Tyler Derryberry and Christen Dute, pays homage to iconic TV series such as Unsolved Mysteries and In Search of…

“When Marissa came to us to make a video for a song on her new album, we were already aware of the album’s themes and her inspirations,” explain Derryberry and Dute. “While she was writing and recording the album sequestered at home during the pandemic, we stayed in touch, sharing our media diet of true crime and the paranormal. We exchanged links to podcasts about Skinwalkers, recommended our favorite serial killer documentaries, and discussed our favorite theories about DB Cooper.”

“We set out to recreate that moment in time when murders and bank robberies shared an equal plausibility with hauntings and high strangeness. Remember when innocently entertaining a conspiracy theory or two seemed to have no cultural or political consequences? When Coast To Coast AM would have us believing the government was hiding a UFO in a hangar somewhere, but no one was going to storm the capital over it?”

“The settings of Massachusetts and Maine appropriately enhanced the New England vibe of our and Marissa’s tone. Cabins older than the Great Depression and cemeteries older than the Revolutionary War are everywhere. Apartment buildings where college students still live today were the scenes of murders fifty years ago. Everybody seems to own an ax. We even did some shooting in Cumberland County, Maine, where Stephen King’s fictional town of Salem’s Lot is located. Turn on the camera, point it at the dark, and the witchiness just seems to seep in on its own.” @marissa_nadler

Lost Horizons – the project of Cocteau Twins’ Simon Raymonde & Richie Thomas of Dif Juz – released part one of its new album In Quiet Moments at the end of 2020 and is set to release part two, as well as the physical of the double album, on February 26th via Bella Union. Every track on the album features a guest vocalist, and today’s new single “Marie” features Marissa Nadler. The music video footage was created by Nadler while the editing and direction was done by Penelope Isles’ Jack Wolter.

Of the track, Lost Horizons said: “I don’t think there was ever a second I wasn’t going to find a song for Marissa to sing on the new lp. SO much cool stuff came out of our last collaborations on Ojalá, indeed I think we ended up recording four songs from the original idea of doing one! Marissa is a really great & generous collaborator as she really throws herself in deep, and commits to it fully. That is a rare and beautiful gift and Richie and I appreciate it enormously.  It was a beast of a track to mix I’ll be honest, and that had nothing to do with Marissa’s vocals, in fact they were a breeze to mix.  But the initial music that Richie and I improvised in our basement studio in Brighton was a bit messy and we didn’t use a click or anything to keep tempo so fixing anything later was a lost cause, but it is such a cool piece that i loved creating (i think i put 4 maybe 5 bass parts on with my old trusty Fender VI string bass guitar!) that even when it’s kinda falling apart during that instrumental section near the end, i still love it. It probably sounds like it took half an hour to mix but the truth is it took weeks of starting it, scrapping it, starting over, scrapping it, etc. And yes, i fully intend to ask Marissa to contribute to our next one too.”

Marissa Nadler adds: “It was a dream to collaborate with Simon and Ritchie for Lost Horizons again. Marie is an aquatic reverie about this title character entering different dimensions. Maybe we’re all feeling a little submerged, watching the time. This stream of consciousness song came from listening to the track that Simon sent, and birthed this hypnagogic hallucination of a story.” 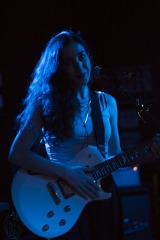 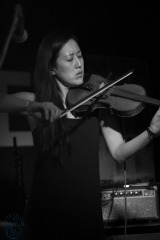 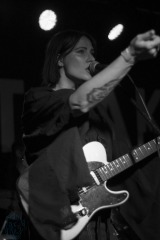