Posted in Videos Tagged with: Dancing and Blood, Low 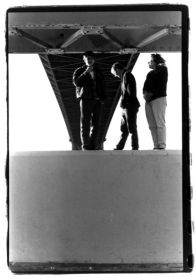 As our recent show review demonstrated Low is not your usual band. Their style is unique. They incorporate sublime vocals to intelligent lyrics. FEMMUSIC was lucky to be able to arrange a last minute interview with Alan Sparhawk and Mimi Parker. Here’s what they had to say.

FEMMUSIC: How long have you been a band? When did you decide that you wanted to pursue music professionally?

Mimi: 1- 7 years as a band.   The word “professional” never really entered into my head.  As a young person,  I suppose I dreamt of playing music for others and wondered how it would be to be famous.  But it wasn’t till Low started that I believed that I might actually play music for others and they might want to hear it.

Mimi: The process varies for us a little.  But mostly, Alan comes up with the basic idea for  a musical melody.  He tends to spend a lot of time playing guitar, and I think he just has an unending  supply of ideas,  I’m sure he would disagree with me.   Then we get together as a band and kind of have a show -and-tell type thing.  Sometimes things just fall into place without much effort on our  part.  These songs seem to be just waiting in “song prison” so to speak,  and are just waiting to be let out.  Others take weeks, months, or even years to feel right to us. When there is a struggle with a song,  many times we find that it needs less of something.  Then we might argue about who gets to “play less” .  This being a desirable thing in this band.  I write the lyrics to the songs that I sing, and the same goes for Alan.  I have a lot of melodies in my head and, so the harmonies that I sing come fairly easily to me.  This comes a lot from singing with my older sister when I was a kid.  Ironically, everyone thought she would be the famous musician.  Not that I’m that famous, but it is funny how things work out.

FEMMUSIC: Who has influenced you most?

Mimi:  When I was growing up my parents listened to C&W music.  Everyone from Waylon Jennings to Sammy Smith.  I get real nostalgic when I listen to that stuff still today.  Just the idea of “simplicity” in general is also appealing and influential to me.

FEMMUSIC: Being the female member of the band, have you faced any sort of discrimination?

Mimi: The only thing close to discrimination might actually be more like condescension.  This occurs occasionally at shows when a house sound person assumes that, because I am female, I don’t know what I’m doing up there, that I’ve never used a mic or a monitor before.  But otherwise, no, being female and in a band is not that novel anymore.

FEMMUSIC: What has been your best experience on this tour?

Alan: We had a lot of good shows.  Shows where there were a lot more people than in the past.  that was nice, but I really liked our Memphis show for several reasons: the p.a. was barely functional but it seemed to work out.  the nature of the stage was such that the people were about a foot in front of us.  there was just this very exciting personal feel to the show.  Also, Mick from dirty 3 and his new wife Jessica got up and played “over the ocean” and “soon” with us and just kicked us through the roof.  this was our best tour ever, I think.

FEMMUSIC: Your musical style is very different. How did people first react to it?

Alan:  We knew most people would not like what we were doing, so it was exiting to watch the reactions.  Some people got very angry.  We figured a few people would like us and over time we’d only get people who knew what to expect.  but at first we got all kinds of reactions – apathy, hatred, name calling, laughter. . .

FEMMUSIC: What are your plans for the next millennium?

Alan: Mimi is going to have a baby in march, so that will be new and exciting. We will probably record some time in the winter then find a bigger van and see how it goes.  we’re a pretty organized, frugal touring entity so I think the baby-on-tour thing may work out.  We never plan too far ahead and it’s worked well for us.

FEMMUSIC: What advise would you give to an artist just starting out?

FEMMUSIC: Is there anything else you’d like to say?

Posted in Interviews Tagged with: Low

It was more than magic that came to The Bluebird on September 23, 1999. It was surrealism at its best. Amid an amp on a stool, purple curtains, and a basic drum and cymbal kit on an elevated platform images would be drawn upon reality. The band responsible was Minnesota’s own Low.

Low consists of Zak Sally on bass, Alan Sparhawk on guitar, and Mimi Parker on percussion. The names and instruments are superfluous though. Low is more than a band touring for a living. Low is a revolution in indie music in quiet tones.

As their name suggests Low is not a headbanger band with a mosh pit and fans running out of control. Low plays in subdued tones and quiet voices. The songs and music flow from the stage like a gentle breeze. They buffet the listener with harmonies, and words causing a gentle rocking.

Among the songs Low played to that full house were “Starfire”, “Weight of Water”, and “Don’t Understand.” “Weight of Water” is a cleansing piece on environmentalism. Later in the set they played “Home” a sad love song. These and other songs from that night can be found on Low’s fifth CD Secret Name on Kranky Records.

Low’s songs are not the usual fare. They are well written, and their performance is a summoning of emotions in the audience. The songs become painted in time, and linger a long, long time.

For more information on Low visit their website at http://www.brainwashed.com/kranky