5 Artists to See at the 4th Annual Loud Women Fest 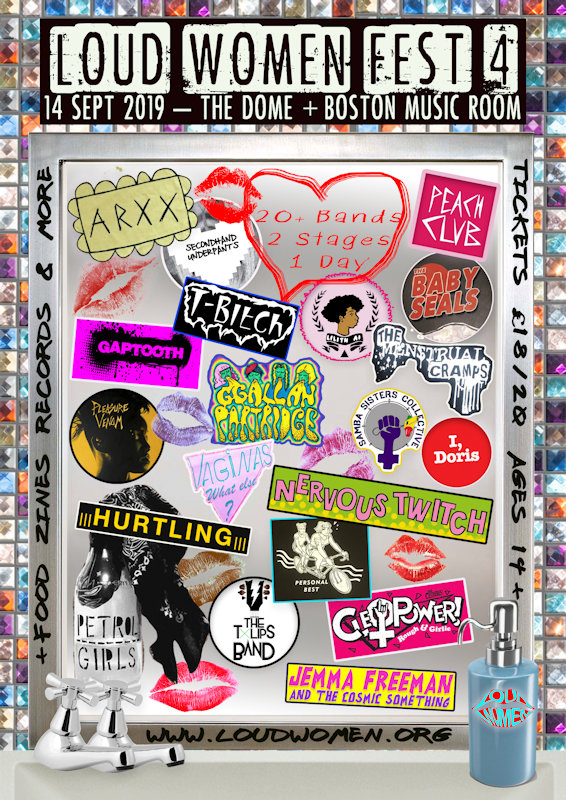 5 Artists to See at the 4th Annual Loud Women Fest

Founded by Cassie Fox in 2015 Loud Women has grown from a DIY platform to a worldwide revolution. It now has chapters in NY, LA & Australia. For the 4th Annual Loud Women Fest, 21 artists will play on 2 stages. The artists come from the UK, USA, Europe, and Turkey. Here are some of our picks:

Petrol Girls – This feminist hardcore band released Cut & Stitch in May and will be releasing a single to give Brexit its just desserts on October 31, 2019. https://www.facebook.com/Petrolgirls/

Hurtling – This 3 piece is releasing Future From Here in October and recently released the track “Summer” https://www.hurtlingband.com/

The Txlips –  This 6 piece band from Atlanta released Queens of the New Age and has been gaining a following http://www.txlips.com/

Pleasure Venom – This Austin punk band is led by Audrey Campbell and is known for their controversial songs and videos including “Hive” and “Deth.” https://www.facebook.com/pvtheband/

ARXX – This 2 piece garage punk band recently released the singles “Iron Lung” and YGWYW (You Got What You Want)  https://www.arxxband.com/

8 Artists to See at  The 3rd Annual Loud Women Fest

8 Artists to See at  The 3rd Annual Loud Women Fest
The Dome, Tufnell Park, Boston Music Room
London, UK
September 15, 2018
https://loudwomen.org/fest/
Zand – Zand is pop rock with an “in your face” realism as evidenced by their video for “Boy Like U” – https://www.youtube.com/watch?v=57iO6yK7150
https://www.facebook.com/ihatezand/
Sister Ghost – Shannon Delores O’Neill leads this 4 piece band which can be hard punk to lyrical songwriting. https://www.facebook.com/sisterghost/
The Franklys – This 4 piece is more mainstream akin to The Pretenders meet The Strokes. http://www.thefranklys.com/
The Menstrual Cramps – This 4 piece punk band is in your face with their debut album We’re Not Ovaryacting. We first heard of them last year and are waiting for the world tour. https://www.facebook.com/TheMenstrualCramps/
Grace Savage – Grace Savage released Control Freak, a follow up to her popular Savage Grace EP.. She is one of the hottest new artists emerging today. See FEMMUSIC’s interview with her. https://gracesavageofficial.com/
Wolf Girl – This London 4 piece released a 7″ in 2017 featuring “Moody.” This pop band is prolific in releasing material steadily since 2014. http://www.wearewolfgirl.co.uk/
Pussyliquor – PussyLiquor – PussyLiquor is a 5 piece rap & punk band from Brighton. They are led by the vocals of Ari Black. https://www.facebook.com/pxssyliqxor/ See our interview with them at http://femmusic.com/wp/index.php/2017/08/31/pussy-liquor/
Ms. Mohammed – We previewed Ms Mohammed last year as part of the Matchwomen’s Festival – Ms Mohammed is another facet of Dana Jade. A reaction to the anti-Islamist Brexitreactionaries she strikes out with an anthem called “Alibi.” http://msmohammed.com/