Lacuna Coil – Save Me

Posted in Videos Tagged with: Lacuna Coil, Save Me 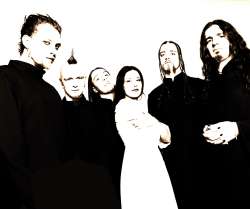 By Smantha Donen and Alex Teitz

Seeing a woman in the metal world is not as rare as it used to be. In Europe, more so than the US, women thrive in this insane world of chaos. For the Italian band, Lacuna Coil, Christina Scabbia shares the heart of the band with Andrea Ferro. The lyrics have a dark, sublime quality that is not drowned out by the music, but instead, brought forth. Lacuna Coil’s newest album, Comalies, is their fourth full-length release. The band has built a strong international following by delivering metal, as it should be.
FEMMUSIC interviewed Scabbia earlier this year. She speaks with energy and purpose and with a drive that will never slow down. For more information visit www.lacunacoil.it

FEMMUSIC: I was wondering if you could describe your songwriting technique and how the band puts a song together?

CS: Basically, we just start from an idea of a melody or a riff we like, and then we build all the song around it. Um, probably the most weirdest thing is that we never start from a vocal line and the lyrics. Because we think the two voices have to be used like two instruments and that is why we just work with the vocals at the very end after the music is done to get the good vibe and to create something that fits perfectly with the music. But basically we just work around a melody and a riff we just go into a practice room all together and we put all the parts together. Everyone comes out with ideas, even if a lot of words come from our houses because we work alone and then we collect everything. And then we put together everything in a practice room.

FEMMUSIC: What was the biggest challenge making the new album, Comalies?
CS: Well, we didn’t build the album, we didn’t create a new album just to say okay lets do something different. but now I can just listen to it and realize that this time we just learned to be more more simple than in the past. With simple I don’t mean that we put less ideas or less passion in the music. We put a lot of passion as I told you in the music but we just learned to avoid to put all the useless stuff that you can sometimes put in a song. Because sometimes during the songwriting you are so excited because you have found 10 good riffs and your attempt, you are tempted to put everything in just one song. And we just realized it just doesn’t make sense because every song has its own personality. So you just have to work in a simple way but in a very intense way and that means taking a better care of the details, the arrangements, the choice of every single sound, especially of guitars and drums, this time it is totally different. It is heavier compared to the previous albums.
FEMMUSIC: Okay, how was it working with the producer on this album? I noticed you worked with him a number of times before.

CS: Yeah, his name is Waldemar Sorychta, and he produced a lot of old records of Moonspell. We have worked with him for a lot of years. Since we started he has always been our producer. And we just decided to work with him again because to be honest before we recorded the album, we were of course thinking if change producer or not but then we realized it can be a risk sometimes because you never really know if the work you are going to do with another producer will be better or worse. And you have to be totally sure about the producer you are going to choose or if a new producer you want to choose. You need to know perfectly his way of working and if it will be useful to your growth. And that is why we choose to work with him again because he knows exactly what we want to reach. He is a very good friend of ours besides being a very good musician and a very good producer. We know we can easily discuss with him all the ideas. We can also fight with him. But It is very easy to work with him. We just needed to have the perfect atmosphere surrounding us during the recording. Because we were totally sure about the quality of the songs.

FEMMUSIC: Okay, where did you meet him?

CS: At the very beginning it was a suggestion from the company. Because we were virgins in this business so we didn’t really have any kind of idea. So we just started to work with him. But then we just learned. And then we started to have him as a friend and we started to go out together and now we know him very good. And we can consider him a very good friend of ours.

CS: Well, making the new album I think that is the best experiences are yet to come. The album was released yesterday in Italy for example. The album will be out today in all of Europe. The best experience will be to go on tour and promote the new songs live. We had so many good experiences by talking about the previous albums where All the festivals all the tours we did. I think that the tours we will play in the near future will be the best. Because we can’t really wait and we are very satisfied. Did you listen to it, did you like it. Don’t lie just to make me happy.

FEMMUSIC: I looked at your website and I noticed that your US tours are going to be January, February.

CS: Yeah, luckily. Because the album is supposed to come out there at the end of October. And today we should have been there. But of course if the album is not released yet then it doesn’t make sense to do a tour. That’s why we just decided to wait. And its not really that we decided to do it its just a question of course more of management and companies and whatever. I can understand that it doesn’t make sense if the album is not out. It’s a bummer. But we will be there very soon.

CS: Well, I think in a normal way. I never had any special problems with both fans and press . It’s something completely natural. its like to work in an office and you can find male and female. It also depends from your attitude because maybe some females could find it very hard to go on tour because it’s not easy at all. you have to be trained because you have to learn to live on the road even if you have your own tour bus. Sometimes it can happen that you don’t do the shower every day and that can be really hard. That is the hardest part for me. But for the rest, you meet a lot of people, you get the opinion of the people who heard your album. No, I never found any kind of problem. Sometimes it can be a good point because you can get more attention just because you have a female in the band. It’s sad but true. Not really sad but normal in the metal scene where you can find just males. If you read a magazine or you go to the internet, of course when you see a girl its easier for the people to just stop and just pay attention for a while. Even if of course behind the image there has to be more.

CS: Aye, let me think. I really would love to put down the prices of the CDs because I think that they really are becoming to high. Because everyone is talking about the MP3 and whatever. I think that basically if the MP3 and the possibility to download the albums is available, even if they are not released yet, is justified due to the prices of CDS. I can understand that kids can not afford to buy 3 or 4 CDs a week due to the prices of the CDS. They are really, really expensive. It is really sad to think that a person would love to buy more records because sometimes it happens that their our two albums you would love to buy because you love both the artists but you have to choose. That is really sad. That is really bad. Yeah, definitely I’d like to push down the prices. It just offends me because I don’t think that it will ever happen. It also kills the music industry because if the records are too expensive you sell less copies and then you have less money to go on tour and produce more records. It is just a circle that kills the music industry.

Christina: First of all, they have to really believe in what they do. They have to have passion not just for the business. This is extremely important because just in this way you could do a continued research in your own work and try to create something new without copying other artists or other people that compose music. And in this way you can grow as an artist, and its easier to go on as a singer.
Secondly, but this is just my point of view, try to communicate feelings while you are singing. Of course the technical part is really, really important that of course you have to be able to sing but…the main thing to go straight to the listener is to try to communicate and express your emotions while you are singing. The things you are saying.
Other advice is to work hard because it is not easy. the music business is not easy at all. The deal is just the beginning. It is not a goal to reach. Because after the deal you have to work a lot. Because you have to learn how to be on stage, you have to learn to be less shy, if you are. You have to learn to talk with the people. You have to learn to be patient because you have to do a lot of interviews and sometimes it happens you repeat the same thing a 100 thousand times. You have to do everything with a very big passion. And that is my advice.