“We’ve known Kerwin for a little while and we were honoured to be asked to create this song. We traded ideas with him, inspired by both the Fourth World characteristics of KKB’s recent Civilisation mini-album and our earliest MIDI rap tracks, and very quickly came up with the carnivalesque stomp of “The Sneaker Dance”.

“The Sneaker Dance” explores the world of the Benchmates, the three animal characters featured in Kerwin’s designs, and details the dance routine undertaken by Lakeith – the nervy blue dog with the braced up teeth – when he sees a really special pair of sneakers. Do the sneaker dance. Dance as hard as you can’

Kero Kero Bonito will return to the US next month for 2 very special shows. They will play LA on December 3rd before heading the The Knockdown Center in Queens on December 9th. Details and ticket links can be found below. 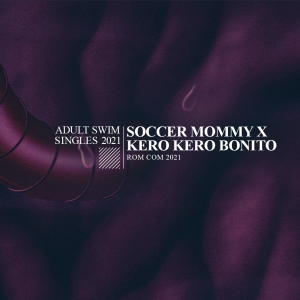 Adult Swim Singles have shared a collaboration by Soccer Mommy and Kero Kero Bonito as the twenty-third entry in the 2021 program. “rom com 2021” is an update to Soccer Mommy’s recent standalone single “rom com 2004,” a guitar-driven indie-pop number that channeled via a fragmented and distorted production by Grammy-nominated producer BJ Burton (Low, Charli XCX, Bon Iver). Kero Kero Bonito have given the song a sugary facelift, replacing the original’s guitars with glossy keyboards in service of a decidedly poppy presentation. “We were very excited to be invited to work on ‘Rom Com 2021,’ state Kero Kero Bonito. “Our contributions were inspired by Bridget Jones’ Diary, late summer and UK Garage vocal manipulation.”

Kero Kero Bonito – The Princess and the Clock

To celebrate the announcement of Civilisation II, KKB shares the first single off of the EP, entitled “The Princess and the Clock.” The song is a lively experimental-pop anthem about old-time mythology, with the lyrics recounting a fictional tale of a princess who is kidnapped while sailing the world. The band explain, “‘The Princess and the Clock’ is the tale of a young explorer who is kidnapped while sailing the world, imprisoned at the top of a tower and worshipped as royalty by an isolated society. Trapped in her chamber, she spends years dreaming of escaping, until one day she disappears. A legend of our own invention, ‘The Princess and the Clock’ was written before Covid emerged, though the long, lonely hours and escapist dreams its protagonist experiences will be relatable to many right now. It’s a song for anyone who has ever felt trapped, lost and alone.” The fable is masterfully illustrated through and animated by Dan W. Jacobs.