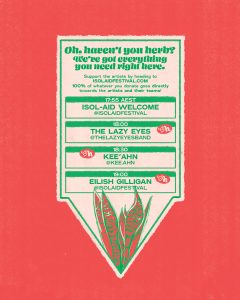 The 60th edition of ISOL-AID takes place Wednesday September 22nd and sixty has never looked so good. Full of the best homegrown talent it’s an extra special way to break up the week, especially for those of us stuck at home. This week’s lineup is in fine form, sashaying from psych rock to folk to pop and hitting all the right notes.

Isol-Aid have teamed up with 99DESIGNS BY VISTAPRINT to offer creative and financial support to emerging Aus and NZ artists. With a staggering total of 975 nominations received, Isol-Aid has a whole bunch of super talented homegrown acts set to play in the coming weeks.

THE LAZY EYES have cemented themselves as a key emerging act in the Australian psychedelic scene. In what was supposed to be a breakout year for the band, with slots at Splendour in the Grass, SXSW and The Great Escape, 2020 saw The Lazy Eyes instead retreat to the studio, delivering their hypnotic EP2 to the world. Hailing from Sydney their tracks touch on themes of growing up and escapism, a dreamy glimpse into the unabashedly unkempt minds of one of the country’s most exciting psych rock [email protected]

With a name coming from the Wik people meaning to dance, to sing, to play, KEE’AHN aims to honour her name and her ancestors through her music. Releasing her first single ‘Better Things’ in 2020 Kee’ahn has already played at St Kilda Festival, Laneway and Yirramboi First Nations Festival, plus has worked as a feature artist alongside DRMNGNOW. Crafting lush melodies reminiscent of heartbreak and healing, the soulful tones provide the perfect backdrop to her mastery as a lyricist. @kee.ahn

Melbourne producer, singer and songwriter EILISH GILLIGAN’s unwavering love for pop shines through on every track she has. Her innate and reflective songwriting coupled with the play of delicate synth melodies creates intoxicating spectral pop that will have you hanging onto every word. Supporting everyone from Alex Lahey and E^st to Confidence Man and Woodes, Eilish has cemented herself as a mesmerising performer, reflected in the praise she has received from the likes of triple j, NME and Rolling Stone. @EilishGilligan 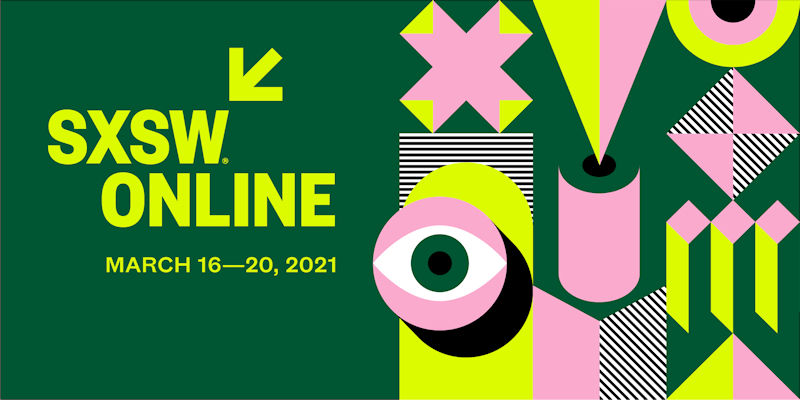 Belako – This Spanish band latest album is Plastic Drama. This quartet is a touring band playing everything from San Sebastian Jazz Fest to Sala Apollo. They are part of the Sounds of Spain showcase.

Br3nya –  London rapper who made a mark in 2018 with the single “Good Food.” New singles include “Bezerk” and “Plenty (Too Trendy)”

Ego Ella May – This London artist released her debut album Honey For Wounds in 2020. Her singles include “Girls Don’t Always Sing About Boys”, and “Give A Little.”

Enno Cheng –  Enno Cheng is an institution. She is an author, playwright, screenwriter, actress and singer-songwriter from Taiwan. She formed the band Chocolate Tiger. She is now known for her solo albums.

Jealous – Paz, Adi & Uri make up this German 3-piece who have a retro rock sound that is part lounge, and part psychedelia. Their single “What’s Your Damage” was released in 2019.

Kee’ahn –Kee’ahn is a proud Kuku Yalanji, Jirrbal, Zenadth Kes song woman With a name coming from the Wik people, meaning to dance, to sing, to play. In 2020 she released her single “Better Things.” She is part of the Close Up: A Sounds Australia Showcase.

NekoJam – This Taiwan all women band is pop electronic music.

Paupière – This Montreal duo is Julia Daigle and Pierre-Luc Begin. They special is “neo romantic” songs that mix synth-pop with 60’s French style. “Coeur monarque” is their latest single.

sogumm – sohumm is a South Korean R & B and soul artist. She recently collaborated with DJ Wegun. South Korea Pop

Wavy The Creator – Jennifer Ejoke, professionally known as Wavy the Creator, is a recording artist, photographer, fashion designer and film-maker, born in Lagos, Southwest Nigeria and raised in the United States. She is best known for her song “H.I.G.H”