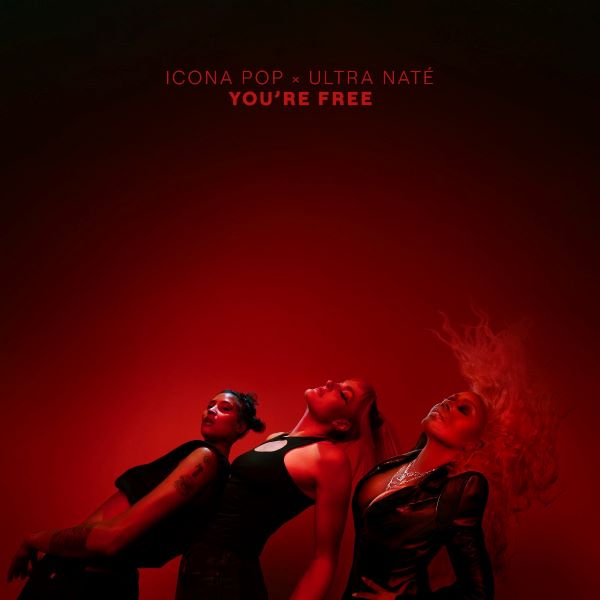 Speaking about the collaboration, Icona Pop reveal, “We’ve always loved Ultra Naté’s original “Free,” and used to play it in the clubs as DJ’s in Stockholm, even before we started Icona Pop! It is the ultimate expression of what we want Icona Pop to represent; freedom to be whoever you want to be, live life to the fullest, and have fun. At first it was intimidating when we started to play around with the idea of making a new version, but it felt natural and really came together when Ultra Naté said she wanted to collaborate on our version, We are beyond honored. Ultra Naté is such a legend and this song is a classic. We hope that we have done it justice”

Ultra Naté adds, “I’m so excited about this collaboration with Icona Pop and the reimagining of my classic, ‘Free’ on its 25th Anniversary. I feel like what has come together here is so special and made for this moment. ‘You’re Free’ really is the kind of interpretation I had hoped for. To introduce the song to a next generation of clubbers in a way that is not framed as nostalgia, but as very now. It’s so important to find a way to bridge the gap when working with such a highly identifiable, classic record – and believe me, many have tried over the years! When I first received the demo to hear the concept and where the production was going, I immediately felt good about it. I love the new parts, the energy, and Aino and Caroline’s distinct singing style. It all feels like a big party with a lot of in-your-face attitude, and I’m here for all of that! “

Global chart-topping duo Icona Pop return today with brand new music, joining forces with German producer and DJ duo VIZE on the track, “Off Of My Mind,” released today via RECORD COMPANY TEN/Ultra Music. Pulsating with serious summer anthem energy, “Off Of My Mind” looks to kick off summer festival season with a real bang.

Speaking about the new song, Icona Pop reveal,“We are always so excited to release new music, especially in these times. We have been locked in the studio working on a new album for what feels like forever! We’re so happy to work with VIZE on this and can’t wait to start playing live again and to share all of our new music.”

On the collaboration, VIZE adds, “It was a pleasure to work on this song together with the girls from Icona Pop. Even though we unfortunately did not have the chance to meet in person, we simply cannot wait to play this on stage. It has such a unique vibe and the vocals are so on point. We are really happy that this track finally ‘sees the light.'”

With the release of the new single, Icona Pop confirm that work has begun on a new album, a follow up to their 2013 smash album, This Is… Icona Pop, which will turn 8-years-old this September.

Elliphant releases her 3rd new single “Time Machine” today. The track is about remembering things in the past. Elliphant has already released “Had Enough” and “Uterus.” Elliphant is a multiple ARIA award winner, originally from Sweden, who has worked with Skrillex, Tove Lo, Icona Pop, Doja Cat, Charli XCX and many others. https://elliphant.com/

Icona Pop – Feels in My Body

Posted in Special Features, Videos Tagged with: Feels in My Body, Icona Pop