HINDS – New For You

Posted in Videos Tagged with: Hinds, New For You 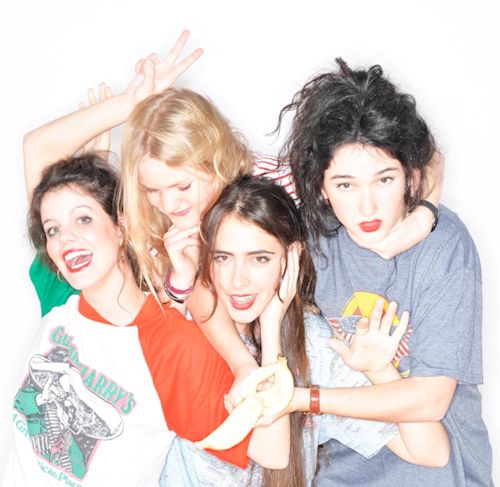 In 2014 a quiet revolution began in Madrid, Spain. On YouTube videos appeared by the group, Deers (Ana Garcia Perrote & Carlotta Cosials). The videos were playful and songs addictive. They included “Bamboo” and “Trippy Gum.”
Quickly the group took off doing touring in the UK. Their sudden profile was not without bumps. They were informed that they were not the only band with the name, Deers and were forced to change it. The new group is Hinds and also includes Ade Martin & Amber Grimbergen. They have also released some demos through Mom and Pop Music. They are coming to the US for SXSW. FEMMUSIC was able to get a short e-mail interview with them. For info visit https://www.facebook.com/hindsband & http://store.momandpopmusic.com
FEMMUSIC: Can you describe your songwriting technique?
Hinds :Our usual routine is starting them home, and then developing the virus in the rehearsal place haha
FEMMUSIC:  How has your songwriting changed from going from being 2 people to 4?
Hinds: The beginning is the same. We (Carlotta and Ana) meet at Carlotta’s place and jam until we get to something we like. We write the lyrics, do the melody and then we work with that in the rehearsal place. We usually change our songs like 10 times until we find the way we like it the more haha
FEMMUSIC:  How did your signing to Mom & Pop Music come about? Have you been able to sign with a European label?
Hinds: Julia from mom and pop wrote us a long long time ago, when we uploaded our two first tracks on bandcamp. Then we met at Primavera Sound, we kept talking and finally chose her for both singles J
And yes!!! We are working with the magnific Lucky Numer Music label in Europe and Australia.
FEMMUSIC:  You’ve recorded some demos. Do you have a plan to make a full length album soon?
Hinds: YES, we are deeply focusing on writing right now!! We are recording the album just after the American tour so you’ll listen to a part of it if you come to some gigs!!!
FEMMUSIC: As women in the music industry, have you been discriminated against?
Hinds: Mmmm we’ve been discriminated by haters in the social media, never by people in the music industry! It’s always people that doesn’t know about this worlds, and that you can’t see.. funny right? hahah
FEMMUSIC:  If you could tour or collaborate with anyone, who would it be?
Hinds: Mac Demarco!!!! Is the piece of our perfect puzzle who’s missing!!
FEMMUSIC:  What advice would you give to an artist just starting out?
Hinds: This is a real job. Take it seriously, since the beginning!
and there is a Spanish saying that says something like, ”Who does not cry does not suck.” You have to be cheeky and bold  at the beginning., No one is gonna do nothing if you don’t ask them too! (but please, always be polite haha)

Posted in Interviews Tagged with: Hinds