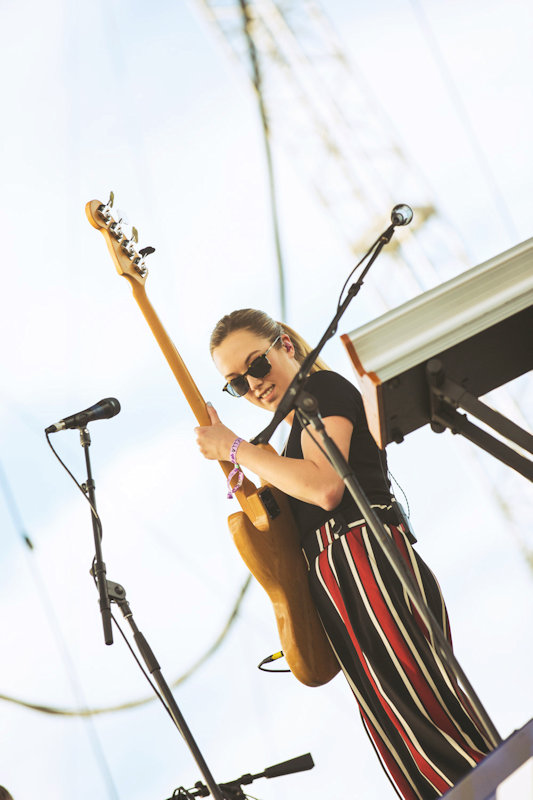 HJB: My dad and brother are both in music, so I think I just thought that’s what you did when you grew up! I wanted to be a touring musician since I was 14 when I played bass in my brother’s band. I then went to Berklee college of music which opened the door to living in America and moving to LA, which is where my professional career really started. Most of my work has come from meeting great musicians and people out there, word of mouth, and being lucky enough to be in the right audition rooms or recommended for the right gigs at the right time.

HJB: Often I’ll just sit at the piano, or with my bass or guitar and play around until I find something I can’t stop playing. I’m not sure it’s technique so much as just seeing what comes out and sounds good (to me). Lyrically I am quite particular and harsh on myself. I find it hard to accept a lyric if I feel like there’s a better way of saying it, and will bash it into the ground until its right, or throw it away. For me the hardest thing is knowing when an idea is done. I lose sight of what I think sounds good half the time, so writing with other people is great for this as there’s a fresh perspective and someone to bounce ideas off. Writing with a band is surprisingly freeing, as you have a clearer idea of what it’s for.

HJB: Probably the pressure of knowing that you’re being hired to be perfect at what you do every night, because you’re part of someone else’s musical vision. It’s a professional service that someone is paying you for, and I’m always aware of that. Things do go wrong with live shows, and dealing with the recovery of that, especially mentally, is a challenge, but one that I’m quite intrigued by. I still never understand why sometimes I can come off stage and feel like I didn’t have a good show, and yet someone else who played the exact same show will come off stage saying that was the best one we’ve ever done! Understanding that and dealing with it effectively is as much part of being a touring musician is as playing the parts right (even though I just said I didn’t understand it…).

HJB: Not too much. I’d like to do more but it’s hard to keep up the studio work while touring. There are a few producers who I’ll work with when I remind them I’m back in town, but most of my connections are in the touring world.

HJB: Touring pretty much dictates that for me. I can’t decide when someone is going out on tour, therefore I can’t decide on when I’m free to work on other things. That’s the thing I love most, so if I’m home working on personal projects and a tour comes through then that takes precedent.

HJB: There have definitely been challenges, but being a woman in the music industry has also at times helped me enormously. Whilst I’ve lost gigs before because of my gender, I’ve also been hired because of it; If they specifically want a girl, or if they need an extra female harmony voice as well as a bassist. Getting a gig is often so much more than just playing, so male or female, the extra things that set you apart, or not, are always going to come into play.

On a day-to-day basis, the biggest challenge is overcoming stereotypes that have been established for previously male-dominated roles within the industry. If I’m in a band with a female drummer, I definitely notice a lot more comments thrown at us about how ‘cool’ or ‘badass’ it is that we’re a female rhythm section. The language used towards female musicians is different. For example people often ask ‘is it an all female band?’ You’d never hear someone ask a male musician ‘is it an all male band?’ It’s now become quite amusing to clock up stories of ridiculous things that are said to me and fellow female musicians, from both genders. I’ve been asked if I’m the masseuse/who’s girlfriend I am/if I’m the make up artist or dancer/if I’m miming. The list goes on. Most of the tours I’ve been on have had a great balance of men and women. However, it’s going to take a lot more women in the music industry for it to become second nature so that there are no more raised eyebrows or shocked faces when you explain what you do, or are good at it.

HJB: The way and amount artists/songwriters get paid. I don’t have the answer for how this would work with how music is consumed these days, but so many artists who appear to be ’successful’ are still struggling. It’s harder to make an actual living in the music industry these days for the people who are actually creating the music.