Mon Laferte has shared a live performance of her new single “Good Boy,” her most recent performance in English, and the highlight of her latest album, 1940 Carmen.

Mon Laferte is nominated for a GRAMMY® Award for “Best Regional Mexican Music Album (Includes Tejano)” for her early 2021 album SEIS. The ceremony will take place on April 3rd in Las Vegas, Nevada. 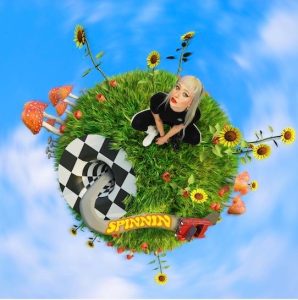 mazie is making a name for herself with music that mixes modern malaise with vintage psychedelia: nostalgia laced with an impending sense of doom fueled by a world in ever-deepening crisis. The Baltimore-raised, Los Angeles-based musician released her debut EP the rainbow cassette this summer via Good Boy / Virgin.

Today, mazie returns with a new single and video, “spinnin.”

“‘spinnin’ felt like such a turning point for me in the studio — we made the whole thing in a day,” notes mazie. “It just flowed out of me. It’s exactly the music that I wanted to be making after the EP and said exactly what’s on my mind: I might not know who I am or where I’m going but life keeps moving and that’s enough for me!” The track is also accompanied by a psychedelic, bubble gum-colored video, directed by Lauren and Phil.

mazie will be hitting the road on her first national tour as the support for COIN.

mazie just announced her debut EP, the rainbow cassette, out August 25th via Good Boy / Virgin Music. The music mixes modern malaise with vintage psychedelia: nostalgia laced with an impending sense of doom fueled by a world in ever-deepening crisis, as heard on her new single “dumb dumb,” available today. Written the day after the Capitol Insurrection, mazie notes “We had been discussing QAnon, misinformation and how quickly the internet has degraded the concept of ‘fact.’ The lyrics ‘Everyone is dumb’ just felt like a very fitting synopsis of those conversations.” She adds, “Lyrics like ‘I just wanna be the comic relief, making jokes not taking any responsibility’ were heavily referencing the memes from the Insurrection and how content like that so quickly degrades the severity of what was happening.”