Greta offers this on the song and video, “For me, ‘F.O.O.F’ is about creating random boundaries and schedules for yourself in an attempt to feel in control. Feeling time passing at varying speeds and time traveling with music. I love Cole’s art, and we were all so excited and grateful they were on board to make this video. I’ve struggled with feelings of isolation as a result of the pandemic, combined with escalated use of technology. This video embodies that, and the ending provides a sense of relief and freedom from those feelings. We could all stand to smash our computers and go touch some grass.” 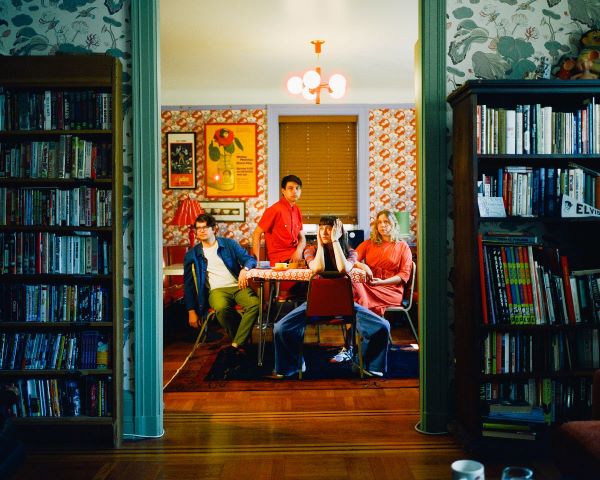 A morning trip to the corner coffee spot becomes disorienting and hairy in the new Frankie Cosmos video for “Aftershook,” from filmmaker Andy Rose Fidoten. The song is from Inner World Peace, the group’s forthcoming new album.

Greta offers this on the song, “‘Aftershook’ is about processing the past, and grappling with maintaining a balanced ratio of emotional awareness and hopefulness. The clown represents my fear of growing up into the kind of stunted adult that toxically influenced my youth.”

As for the “Aftershook” video, Greta says, “Lauren had the basic idea for this music video, and we liked it for this song because it has a sort of spooky vibe to it. I love where Andy and their team took it because it feels like it’s about grappling with one’s sense of self/reality, and searching for one’s place in the world/community.”

In the sweet and tender official video for “One Year Stand,” directed by Eliza Lu Doyle, and starring Frankie Cosmos’s Greta Kline and Alex Bailey, Greta does an interpretive dance using the song’s lyrical theme of accepting new love while acknowledging that your past is part of who you are.

Eliza offers this, “We conceived of the setting for the video as a cross between a diorama and an empty arena stage. To me, the interaction between Greta and the camera is almost like an act of faith — a reach toward an absent audience. We wanted to channel the pleasure of half-performing for that imaginary gaze.”

Greta elaborates further, “This music video was created with my best friend Eliza, who makes video and performance art. It feels like an encapsulation of the record in that it’s strange and vast while also being contained and interior. Clowning and playing are a huge part of collaborating for me and Eliza. We wanted to perform a dance without dancing — the kind of movements you fall into in private, banal moments, playing without even realizing. Choreographing together felt like we were in 6th grade again, all id and giggles. The album and the video were made in these environments of love and pleasure.”