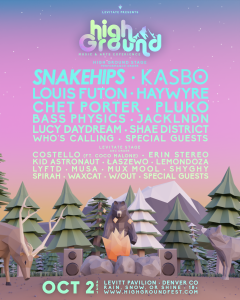 Levitate Events presents High Ground Music & Arts Experience, Denver’s first one-day festival that centers on melodic, live-performed electronic music and the natural beauty of the Colorado outdoors. The inaugural 18+ event takes place on October 2nd, 2021 in the grass amphitheater of Levitt Pavilion at Ruby Hill Park, minutes away from the heart of Denver. Attendees (referred to as “Revelers”) will enjoy two stages with local and international musical performers, as well as installations and activations to highlight Colorado’s culture, food, cannabis, and art.

On the High Ground Stage, headliners Snakehips and Kasbo will join acts like Louis Futon, Haywyre, Chet Porter, and Pluko alongside Colorado favorites Bass Physics, JackLNDN, Lucy Daydream, Shae District, and Who’s Calling. The Levitate Stage will feature 12 additional entertainers including Kid Astronaut, Laszewo, w/out, and more, with the majority of performances to be live. With 23 acts playing, High Ground Music & Arts Experience is set to be Colorado’s largest single-day independent music festival this year.

Created by Noah Levinson of Levitate Events, High Ground Music & Arts Experience is a culmination of his extensive and varied background as a music industry entrepreneur. A recent graduate of NYU’s Clive Davis Institute, Levinson honed his skills as a promoter and event producer at Insomniac Events. Together with his business partner (and mother) Jobi Halper, he developed the idea for an outdoor music festival that celebrates his love for the environment and chill electronic music.