Lights expanded on the track, “‘Real Thing’ challenges the traditional concept of ‘The one for you.’ I don’t think it actually exists, but we are predominantly sold this idea that we need to find one person, lock them in forever, and you can’t change and grow. We’re always looking for the real thing, but it’s not always fucking real. Elohim and I had a really fun couple days working at her spot in LA writing this track. She is a virtuoso!”

Last month, the artist announced the “Baby I’m Back” North American headline tour. Earlier this fall, Lights returned with new single and official video for “Prodigal Daughter,” the first track from her forthcoming new album expected for arrival in 2022. 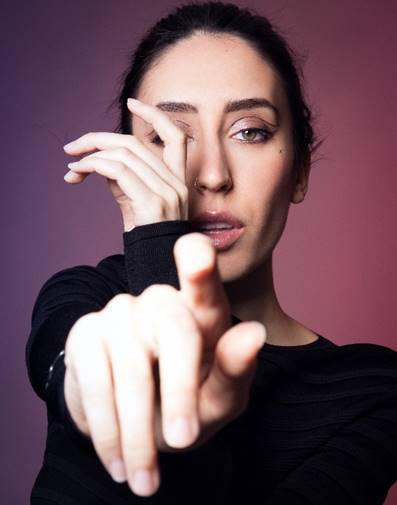 Elohim grew up playing classical piano but you could not tell that now. Today she is a songwriter, producer, and star of her own headlining tour: The Group Therapy Tour, which begins today. The tour is a follow-up to last year’s release of Braindead which focused on her own struggles with mental illness.

Elohim has had a number of singles including “Xanax”, “Hallucinating”, “Braindead”, “Half Love” and releasing today for the tour “Group Therapy”

Last year Elohim returned to her roots with a project called Reimagined. It included a string section and Elohim at a piano reimagining her songs in a beautifully composed setting. For info visit https://elohimxelohim.com/
FEMMUSIC: Can you describe your songwriting technique?

E: I guess I would describe it like a mad scientist. There isn’t really a method to the madness, but it comes together and is my unique process. I start with sounds whether that is a sample I create or a chord I play and then usually depending on how inspired I am by the sounds, the words and melody tend to pour out.  Some are easier than others and I write what I feel.

FEMMUSIC:  Let’s talk about the Group Therapy Tour. This is your headlining tour. What are you most looking forward to? What scares you about it?

E: I am looking forward to this community of love coming together as one. I feel magic in the friendships that have been created and cherish them. When we all get to celebrate friendship in one place that is curated for us, there is nothing like it! The scariest part is everything falls on me and I have to sell the tickets! But it is all part of the adventure of being an artist.

FEMMUSIC: What was the biggest challenge making Braindead?

E: Probably just my own daily battles I go through mentally. It is a catch 22. I write what I write because of my struggles, but I go through the struggle which is pretty unbearable at times. Another tough part is narrowing down songs when you have so many! Overall it was a nice experience.

FEMMUSIC: Tell me about Reimagined?  What the biggest challenge making the show and the double album? BTW after reading about it I will be buying the double vinyl today

E: Thank you!!! It is really special to me. I grew up sitting at the piano so I wanted to show this side of me. The Reimagined show was the hardest show I’ve ever put together. I had to rearrange and relearn all of the music. I had some nights where I’d be sitting at my piano ready to give up, but once I got through rearranging and writing all my piano parts it really started to come together. The strings came in and really brought it home. It was the first time performing with other musicians onstage, so I also felt a new comfort and safety net. I grew a lot from this experience!

FEMMUSIC:   With Braindead you came out about your own problems with mental health. I do think mental health has become a bigger issue in the music industry. What do you hope people get out of your example? What else would you like to do?

E: I have been talking openly since the second song I ever put out which was called “Xanax.” I hope people will take this topic seriously. It is an illness. Just because you cannot see it doesn’t mean it isn’t there. I hope people will be honest and understanding and careful about their use of the words panic, anxiety and depression. I hope people will feel safer and more accepted from my message and music. I often feel very alone in my struggles so I can only pray I can ultimately just help someone feel less alone. There is so much more I want to do. I’ve been getting involved with organizations dedicated to supporting mental health awareness and suicide prevention doing absolutely anything I can to help.

FEMMUSIC:   On the same track, what are your coping skills on the road? What advice would you give to fellow musicians?

E: Surround yourself with people that love and understand you. Small things like having peppermint oil, peppermint tea. But also finding quiet alone time. Sometimes the only place you can find on the road is a bathroom stall but I’ll take what I can get! Getting centered and breathing is incredibly important.

E: “Kid A” by Radiohead. Every time I hear it I still get that feeling…you know the one…the one your favorite song gives you…you can’t even explain it.

E: I never really thought about things in this way, but I have noticed, and I do get frustrated when I’m listening to alternative radio and hear a girl once every two hours. Or festivals with mostly male lineups. I always want to scream “I’M RIGHT HERE DO YOU SEE ME?!?!”

FEMMUSIC:  Whom would you most like to collaborate with, or tour with? Why?

E: I would make it more about love and art and less about money and fame.

Posted in Videos Tagged with: Elohim, Fuck Your Money