Echosmith ft Mat Kearney – Tell Her You Love Her

Posted in Videos Tagged with: Echosmith, Mat Kearney, Tell Her You Love Her

Echosmith, The Score and Jena Rose at the Gothic Theatre – Englewood, CO

What happens when four siblings are signed to a major label at a young age? In Echosmith’s case, a great deal of success. Echosmith is Graham, Noah, Jamie and Sydney Sierota. The band started in 2009 but became a worldwide story with the song “Cool Kids” in 2013. Their album Talking Dreamswas also released in 2013. Since their beginning Echosmith has been a touring band. They have played Warped Tour, The Honda Civic Tour, toured with Neon Trees as well as headlining shows. They are now on a headlining tour and FEMMUSIC was able to get a few minutes with Sydney. This is an e-mail interview and is published without editing. For info on Echosmith and the tour visit www.echosmith.com

FEMMUSIC: Can you describe your songwriting technique? How does a song evolve within the band?

SS: For us it’s never the same. Any of us can come up with a melody, lyric and chord progression. We try and have a rule of “no rules” and that keeps it fresh. We all contribute and share the songwriting equally.

FEMMUSIC:  What was the biggest challenge making Talking Dreams?

SS: Having to do school at the same time.

FEMMUSIC: What was the best, or most memorable, experience making Talking Dreams?

SS: Hearing what we heard in our heads come out in real life. It was amazing.

FEMMUSIC:  You worked with both Mike Elizondo & Jeffrey David on Talking Dreams. How was it working with them? What did you learn from them?

SS: First, Mike is a really easy going talented guy, he never rushes you or makes you feel like your idea is stupid. That’s important. He has some amazing credits but he’s one of our closest friends. Jeffery is our favorite collaborator and we ended up writing every song with him. He’s got such a way with melodies and lyrics that is just special. He is completely different than Mike and is full is crazy energy and actually wants us to hurry which is hilarious. They were both amazing to work with.

FEMMUSIC: You signed to Warner Bros Records in 2012. What made you sign to a big label?

SS: We knew we’d sign with a major label, we waited until the right one came along and Warner Bros Records was worth the wait. In every way they are the best partner for us in the world. They have helped us grow in ways we didn’t know we could.

FEMMUSIC: I see this question frequently in some of your other interviews but I still have to ask: What is it like being in a band with your siblings? What do your parents think of all the success you’ve had?

SS: It’s fun and challenging at the same time. Like any band you have moments creatively that you don’t agree on and you just have to work through it. We are committed to each other so we can be honest and stick it out. It’s really working so we’re happy about it all. We’re grateful for sure.

FEMMUSIC: Who would you most like to tour with, or collaborate with?

SS: Coldplay. They have the most exciting career to us. They are a global band and that’s exactly what we want to be. We’ve been to Europe 4 times this year and we just love the fans there. We’re going 3 more times too.

FEMMUSIC: I ask this question with all of my interviews, as a woman in the music industry have you been discriminated against?

SS: No, but I’ve seen people think you’re less or that you know less than they do because I am a young female.

FEMMUSIC:  You’ve been touring continuously for the past couple of years. What experiences have stood out the most for you? What do you miss most when touring?

SS: We love touring a lot. It’s not easy but it’s amazing to see cities all over the world. Being in Berlin and Paris was magical. But so was walking the streets of Madrid. Each country and city is special. We’re on tour right now actually so I don’t miss anything about not touring. lol.

FEMMUSIC:  On a similar note, you’ve been touring so much, have you had time to work on new material? When would you like to put out a new album?

SS: We haven’t but we will be working on some new stuff in the next few months.

SS: Decide who you are and stick to it, write the best songs and care about your fans! 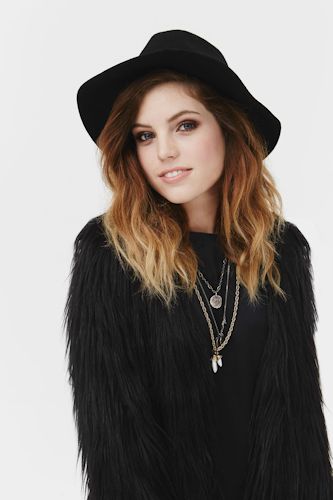 Posted in Interviews Tagged with: Echosmith