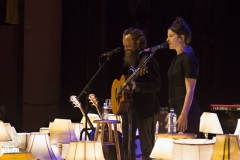 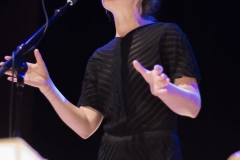 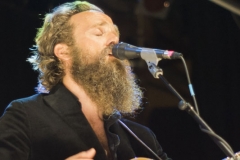 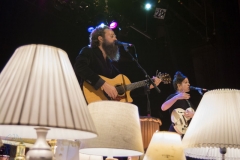 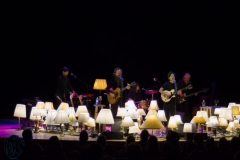 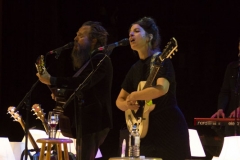 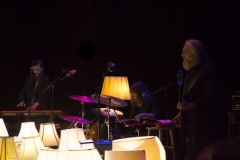 The Boulder Theater is many things. A gorgeous thousand seat theater with two levels. A place where national and international artists come to play. The home of the nationally syndicated radio program, E-Town. This venue has seen the likes of Zap Mama, David Wilcox, and Patty Larkin. This new year’s eve it will play host to Emmylou Harris. The woman who runs the staff is Cheryl Liguori. FEMMUSIC was honored to be able to sit down with her for a few minutes.

FEMMUSIC: How did you become involved with the Boulder Theater?

CL: I’ve managed music venues for over ten years now. Started out in advertising. Left advertising to help a friend build and open Wetlands in New York which is a seven night a week rock venue. Did that for about three years. Moved out to Colorado to maybe go back into advertising. Before I knew it I had been  snatched by the Fox Theater to go and general manage there. Did that for about six and a half years. Decided to move away from the seven night a week heavy rock scene, and move to a more diverse cultural adult venue. The Boulder Theater was looking for a general manager, and they asked if I would send a resume. Somehow they convinced me to come over.

FEMMUSIC: What are your regular challenges on a weekly basis?

CL: The music industry here in the front range of Colorado is very, very competitive. Whether it happens to be at the Fox, or here. More so here. It always seems like there are more venues opening, and there are more promoters , sometimes , than you have talent to fill these venues, and service these promoters. So on a daily basis, that’s always a challenge, trying to find… attract talent that can fill a room this size and try to keep a ticket price that’s somewhat reasonable but in a very competitive market. It’s really an artist’s market. They can choose which venue and how much they make. More so than when it’s one venue with a lot of artists trying to bring that artist in. It’s really an artist’s market at this point in this area,  I think.

As with any business keeping a good staff is always critical. That’s an ongoing process especially here in Boulder. I think most of the people I know who own businesses in the service industry feel they dedicate way too much of their time to constantly keep a good staff. Those are obstacles. But I think that’s true of any business.

FEMMUSIC: Do you have any particular strategies that you use with the promoters and artists in terms of how you do attract them here as opposed to another venue?

CL: Well, it’s a beautiful venue. I think what we have here is an atmosphere folks over the age of twenty-five appreciate through their seating options. You can sit in the balcony, or some of the seats downstairs or you can dance. The artists really like the green room which is very spacious. There are several rooms, and showers and nice things like that. We try to go above and beyond what’s normally provided whether it’s fresh flowers in the dressing room. Even if their rider doesn’t call , a deli tray, or things that. We try to provide those things.

The opportunity to make more money than they would make at another venue. We try to make sure they’re welcomed from the time that they walk through the door. Treated as if they’re guests in our home which is what the theater should be.

FEMMUSIC: What role do you play, as general manger, in booking at the Boulder Theater?

CL: In booking as general manager, certainly anything that affects the bottom line comes through me. I try not to play a heavy hand in as far as supervising the booking agent although if we’re talking about spending over $5000 on a talent fee I want to look at the bid and discuss it with the booking agent before it goes out to make sure it makes financial sense, and that it’s a risk that we’re willing to take. Anytime you put out a bid it’s a risk. It’s gambling. Booking talent is gambling. That’s the role I play.

I’m also pretty involved in promotion. In terms of giving input, and making sure certain things are done. Whether it’s an e-mail campaign. How our we spending our advertising dollars? What are we doing above and beyond? Are we getting posters in certain strategic spots that are off the beaten track? We all work together as a team to make sure that after a show is booked that we follow through to make sure it’s promoted properly.

FEMMUSIC: The Boulder Theater is the venue of E-Town, the nationally syndicated radio program. What additional challenges does that show entail?

CL: Well probably the most difficult thing is that we allow E-Town to reserve every Sunday night for the entire year. So they have first holds on Sundays nights which they need in order to go after their talent. It’s a little different the way they book talent they don’t have the luxury of booking an artist three months out. They are constantly dealing with management rather than the agents, the artist’s booking agency. So if they happen to be free three weeks before then they’ll confirm it. So that leaves, it leaves, maybe if E-Town isn’t able to take advantage of all of those Sunday nights, it leaves them open. Unfortunately they don’t release them ’til, say, three weeks out which for us, is a little too difficult for us to try to book a show that has any kind of risk factor. In other words, we’re not going to go out and spend any sort of money on a show with only three weeks to promote it.

On the flipside it also brings out artists who would not ordinarily come straight to this room. It gives a lot of artists the opportunity to see what a beautiful venue this is. So there’s give and take with that.

FEMMUSIC: So it becomes a preview spot for the artist as well as for you?

CL: Sure. The other thing is it’s not much of a drinking crowd. The show starts at seven and ends at nine. It’s a pretty short night, but overall I think it benefits the theater  greatly to have E-Town here.

FEMMUSIC: Women general managers are uncommon. What are your thoughts on this?

CL: I honesty don’t know. I don’t know really. In the music business maybe it is a little uncommon. It’s a tough job. Most of the staff that I’ve managed as far as management in management positions are mostly men. Generally I’m managing more men than women. I always feel like I’m a mother, like at the Fox, I felt like I was a mother to a family of about seventy. Here, the same.

I don’t know how different it is for a man to manage a venue or a woman. We come from different perspectives. Maybe some of the finer details are not overlooked by women who manage. Whether it’s clean bathrooms or making sure things certain things are organized in different way. In general it’s a tough business. I think more women should be in it. I’m always surprised when people come to me and say, “Wow! A female manager, cool.”  A lot of female artists when they’re playing really appreciate the fact that there dealing with a woman at the venue.

FEMMUSIC: What has been your best show since you’ve been working here?

CL: Since I’ve been here….they’ve been a lot. First of all what makes a great experience? It’s not necessarily that the event sold out, or the venue made money. It’s really what kind of vibe the evening had, and what great time people had. And since I’ve been here I’ve always enjoy it when people love the theater. They appreciate how beautiful it is. They don’t throw stuff on the floor. That there’s room for people to move around and dance. They’re not packed in like sardines. I guess like bringing in an artist like Hubby Cote where not many people knew about him. So we gave away as many tickets as we could to people who would just love this kind of show and expose them to this kind of artist. We had a lot of people show up. And people were appreciative the fact that we gave them tickets to come and see an artist they weren’t familiar with, and that they had the best time ever. Meeting the artist, this was the place, this is where we want to be and so everybody’s excited. People were turned on to new talent. They’ll come back and buy tickets the next time. The artist had one of the best stops on his tour. That always feels really good. The Hubby Cote shows stands out as one of those great nights.

FEMMUSIC: What is your opinion of the Boulder music scene?

CL: I think the people of Boulder should be ecstatic with the about the amount of music, and the quality of music that comes through this town. Between the Boulder Theater, The Fox Theater, Mackey Auditorium, Round Midnight, SOMA to a certain extent. There’s a tremendous amount of music to be seen in this town. All kinds of music. I think for the size of Boulder there’s an awful lot. I think the people in this community are pretty lucky.

It’s pretty diverse to. I mean we’ve had John Zorn here. We have Frank McCourt who wrote Angela’s Ashes coming to speak here. All across the board there’s plenty of things to do and see between all of the venues here in town.

FEMMUSIC: What would you like most to see changed in the music industry?

CL: I would like to see the cutthroat competition changed because what that ends up doing is it drives the talent fees up and ticket prices up. I think the people who are buying the talent lose. They lose because the ticket price is too high for maybe say that extra hundred people to come to the show to check out somebody they might not ordinarily check out or even somebody they love but they can’t afford a thirty dollar ticket. So I would like to see something like that changed. I don’t see it changing in the near future. I guess ticket prices would be the most.

CL: Engage your audience as much as you can. Get an audience member to take an action such as put themselves on a mailing list or something. So, as an artist, you can continue to build your following. I’ve seen a lot of artists go from playing weekly to thirty or forty people to becoming national artists. What I’ve always seen is that they’re very, very good at self promotion. When you’re good at self promotion venues are much more willing to take chance on you because they know you’re out there trying to get people in to see you, as well as they’re out there trying to get people in to see you. I’d say really work on self promotion and engaging your audience.

The Boulder Theater is located at: