The Regrettes confirm the release of their third studio album, Further Joy, on April 8th via Warner Records. The band, consisting of singer and songwriter, Lydia Night, as well as Genessa Gariano (guitar), Brooke Dickson (bass) and Drew Thomsen (drums), have written a manual for living in these times, replete with highly personalized songs about things we’re all going through. Night shares, “that phrase, ‘further joy,’ summarized what it meant to be on the hamster wheel of constantly chasing happiness, but in turn, that’s what makes you unhappy. I was stuck in a loop of wanting to be better, wanting to be good, and therefore I couldn’t be here. I couldn’t be present.” The desire to break free of that cycle is what the band’s third album, Further Joy, is all about, a joyous and self-aware soundtrack for those interested in what Lydia refers to as “dancing the pain away.”

The Regrettes also share their music video for “That’s What Makes Me Love You,” directed by Claire Marie Vogel and Olivia Eberstadt. “I was in a dark anxious place and realized that I was becoming very critical of my partner.”

Night reveals about the new song from their forthcoming album, “I got out of that place by realizing, ‘I love this person for exactly who they are and nothing needs to change about who they are or who I am to make each other happy. The song came from me flipping the narrative to ‘That’s not why I should be scared. That’s why I love you.’”

The band today also confirm their 19 date Further Joy headlining tour (full dates below), with support from Alex Lahey on all dates.

Mar 6 – Poughkeepsie, NY at The Chance*

Mar 9 – Richmond, VA at The Broadberry*

Mar 13 – Cincinnati, OH at The Ballroom at Taft Theatre*

Apr 21 – San Diego, CA at Humphreys Concerts By the Bay^

May 1 – Charlotte, NC at The Underground+

May 3 – Washington DC at Lincoln Theatre+

May 4 – Philadelphia, PA at Theatre of Living Arts+

May 14 – Madison, WI at Majestic Theatre+

May 15 – Minneapolis, MN at Varsity Theater+

May 20 – Portland, OR at Roseland Ballroom+

May 21 – Vancouver, BC at Fortune Sound Club+

May 22 – Seattle, WA at The Neptune Theatre+ 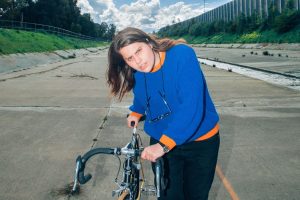 Australian musician Alex Lahey returns with new single, “Spike the Punch,” out today on Liberation Records.  An explosive power pop track, propelled by Lahey’s knack for indisputable hooks and fiery, confessional lyrics, “Spike the Punch” marks Lahey’s first release since writing and recording “On My Way,” the theme song for Sony Picture Animation’s The Mitchells vs The Machines, now Netflix’s biggest animated release of all time.

“‘Spike The Punch’ is a song about the fun that comes with self-sabotage and reckless abandon. It’s big, it’s loud, it’s fun, it’s its own beast,” says Lahey. “There are some super sinister tones in there rubbing up against really bright anime style guitar harmonies (guitarmonies, anyone?..) and shout choruses. Spike feels like a raucous bookend to navigating these cruelly unpredictable times. Touch wood.”

The video for “Spike The Punch” was directed by Matt Sav and features a performance by Matthew Pope. Of the video, Lahey says, “The ‘Spike The Punch’ video is perhaps my favourite video I’ve ever been a part of. I’m incredibly grateful to Matt Sav and his team for pulling this together while I’ve been locked down in Melbourne. Matt and I spoke about how we wanted to capture a sense of freedom, fluidity and fun in this video along with hurtling forward momentum. Matt Pope, the brilliant performer who stars in the video, completely harnesses the direction and puts on a hell of a show. It gives me chills every time I press play.” @alex_lahey

Posted in Videos Tagged with: Alex Lahey, I Love You Like A Brother

Alex Lahey – I Haven’t Been Taking Care of Myself

Posted in Videos Tagged with: Alex Lahey, I Haven't Been Taking Care of Myself