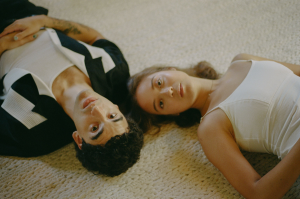 Co-written by the two musicians, “Love Flew Away” seamlessly blends the talent of both Laufey and Melchor in a gorgeous ballad. Laufey says, “Adam has been one of my greatest musical idols in the past few years so it’s an incredible honor to release this song with him. Writing with Adam was so much fun and we found that we had similar experiences with the pain of long distance love – which we ultimately wrote the song about.” Melchor continues, “The first time I heard Laufey’s voice, I instantly knew I needed to sing with her. She came to my house one day and we just talked for about 7 hours and by the end we found we had so many things in common, relationship-wise. I showed her this idea that I had after leaving the person I had been seeing overseas, and how sometimes love feels like it flies away. She took the idea to the next level and we knew it would be incredibly powerful as a duet.”

Dodie with Adam Melchor at the Gothic Theatre
September 28, 2019
Photos by David A. Barber