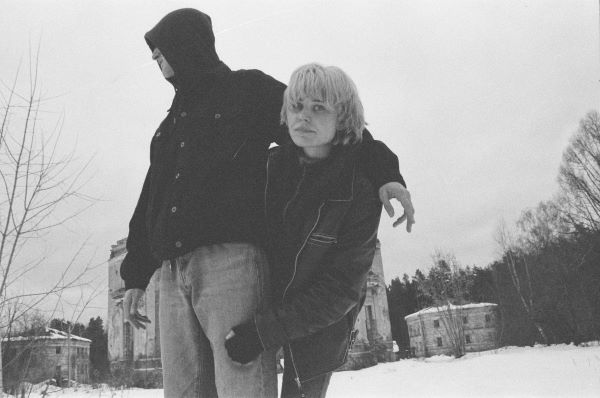 Kosaya Gora, (Oblique Mountain) is a brand new indie project from acclaimed electronic producer / singer Kedr Livanskiy and experimental producer / visual artist, Flaty. Though the two are no strangers to artistic collaboration, (Flaty co-produced Livanskiy’s lauded album Your Need and features on her most recent album Liminal Soul), Kosaya Gora is an entirely new sonic direction for both artists.

Their debut single “Te Slova” (“Those Words”) is a hypnotic foray into guitar-based indie/alternative, with echoes of ‘90s grunge and haunting dream pop. Though these influences may be new to fans of both artists’ solo work, they’re deeply familiar to Livanskiy and Flaty themselves, echoes of their youths spent traversing Russia’s underground music scenes.

It makes sense, then, that a series of spontaneous jam sessions over the aimless period of the 2020-2021 quarantine would naturally resurface these familiar sounds. The music flowed so easily, in fact, that the two decided to formalize their approach, putting together a mobile studio and recording between remote Russian villages.

The resulting track, “Te Slova” is a fitting introduction to a group that, though brand new, feels oddly timeless. Over a spare, alt rock-influenced guitar, Livanskiy sings a wistful, looping melody: “I will write those words,” she recites in her native Russian, “which will melt the ice in the hearts / so that there is no sadness, so that there is no war.” Even without the translation, there’s a palpable mournfulness to “Te Slova”, which the duo explain is about “longing for a lost childhood; an attempt to look at the world again with a pure and naive look of a child.” Haunting vocal harmonies are layered in as the track builds, adding to the sense of otherworldliness.

In the school notebook I found, I will write those words:

which will melt the ice in the hearts and pick up the kids,

Those words, like spells, will sweep through the years,

Those words cannot be washed away, they are in the world forever:

So that you and I, of course, live until spring

I’ll draw a cat, a house with a forest, a circle of the sun

Will run along the line, illuminating everything around

I will draw with a blue pen the sky sea clouds

We will try in battle

paths of will those words

we will try in battle

paths of will those words