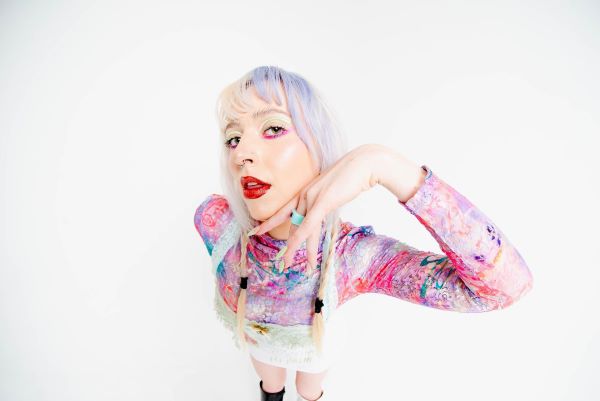 Pairing fatalistic lyrics with shiny alt-pop arrangements that are as infectious as they are unpredictable has seen the quick ascension of 21-year old Baltimore native mazie. Her single “dumb dumb,” which appears on her debut EP the rainbow cassette, is a perfect embodiment of mazie’s multilayered, psychedelic twist on pop that’s Stepford Wives meets Lisa Frank.

“My music is heavily rooted in existentialism, and the duality of the whimsical and upbeat combined with the sadness of the lyricism” mazie shares. “I’m always trying to walk that line.”

Originally written the day after the Capitol Insurrection, “dumb dumb” has found an audience around the world, including being used as a protest song in Russia and Ukraine.

To celebrate the success of the track, today (October 12th) mazie shares a “trippy version” music video for the song. The kaleidoscopic clip was created by 2D/3D digital designer Joel Dudzik using PyTTI – an AI software that generates images based off a text input. “Our goal has always been to simulate psychedelic experiences and AI art provides an incredible toolkit that allows us to very accurately communicate what tripping visuals are like,” mazie shares about the video.

“dumb dumb” was produced by mazie’s childhood neighbor Elie Rizk, who she’s known since she was 15 and they both moved out to LA together.