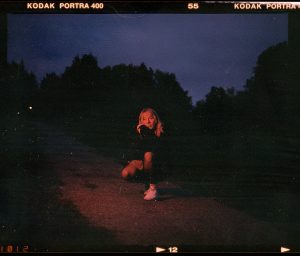 Ottawa-based artist fanclubwallet – the project of Hannah Judge – released its debut EP Hurt Is Boring earlier this year to critical acclaim. The EP, full of punchy, idiosyncratic pop songs, brings a new meaning to the term bedroom recordings, as it was made while Judge suffered a Crohn’s disease flare-up which left her bedridden in her childhood home for 10 months. Today Judge, whose illness is now in remission, releases her first new single as fanclubwallet since the release of that breakout EP. “

That I Won’t Do” was written while Judge was re-learning how to re-enter the world and socialize, much like all of us as lockdown and quarantine restrictions have begun to ease. “The song is about dealing with a new relationship where you aren’t sure whether the person is good for you or not, and you’re not feeling like yourself. It’s about trying to break bad habits while not wanting to break them at all,” she explains.