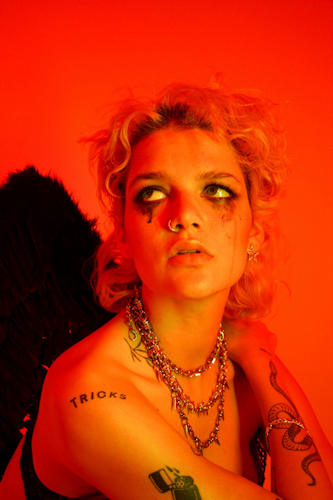 MAY-A describes it, “It follows the course of a relationship, a journey of queer discovery and the growth from an adolescent to a young adult. Each song is a piece of the last four or five years of my life, the most recent track having been written last year and the earliest at 16. As the music developed, so did I. You can listen to me grow up, gain confidence and understand myself through the way I approach my relationships. I hope you enjoy this slice of myself and pieces of the people I’ve loved <3”

FEMMUSIC has featured May-A’s tracks “Swing of Things” and “American Dream” at:

May-A has been compared to Lorde and King Princess. The story has been more about her age than her ability. In a week where the Tokyo Olympics just finished, a 19-year-old is veteran more than an epiphany. The story we see is a self-assured queer musician making her mark and following in the footsteps of others before her. She is an artist to watch for the statements she will make and ideas she will create that will change the view of the woman to follow her.

FEMMUSIC: What was the biggest challenge making Don’t Kiss Ur Friends EP?

MC: Picking which tracks should go on the EP. I’ve been writing songs with my producer for over four years so it was difficult to cut them down. 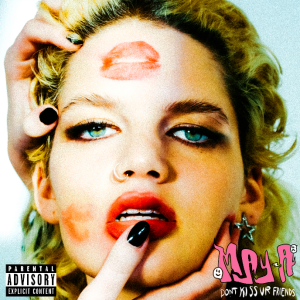 MC: Just to get more music out. To give people something that they can hopefully relate to. To give more of an insight to myself.

FEMMUSIC:  What was your favorite thing about making the album?

MC: I’m in love with the process of making songs. I wasn’t really thinking about writing a record but more just letting my emotions out each time I needed to. I’m just glad it’s all cohesive.

FEMMUSIC:  You’ve signed with SONY in Australia, and Atlantic Records in the US. What made you decide to sign with a major label(s)? What were you looking for in signing?

MC: When I met my A&R at SONY we clicked automatically. She’s this insane powerhouse woman with the craziest energy. Just so excited about music and so ready to listen to everything you throw her way. Atlantic was one of the most diverse teams I spoke to, everyone was so excited and invested in the music. Both labels understood who I was and where I was coming from, they really valued my songwriting and agreed to work with me on my art and give me as much creative control as I needed. I feel really blessed and lucky to have found the people I did.

FEMMUSIC:  You worked with Powfu for “Swing of Things.” You worked with Baby Queen for “American Dream.” What do you look for in collaborations? Who else would you like to work with?

MC: I would love to work with Dominic Fike, beabadoobee, or Troye Sivan. I look for someone that I think I would write well with, someone who understands my project and I understand theirs.

MC: I Just grab a page and write down every single thought I have based around a specific situation and freestyle off that.

FEMMUSIC:  What song, not your own, has had the biggest influence on you, and why?

MC: I actually can’t pinpoint a specific song but growing up listening to Taylor Swift and Amy Winehouse definitely heavily influenced the way that I look at the music I write.

MC: Women make up 13.4% of artists, songwriters, and producers compared to 86.6% of men. It’s extremely rare to have a room solely full of women, and when you do end up in that situation, people like to tell you that you’re trying too hard to “make a point out of it” but a room full of men is completely normal. I’ve only worked with a female producer once. It’s hard for women in the music industry because we’re still talked over and looked down upon. It’s better than it once was but we’re all sick of it.

MC: The above topics. an increase in the amount of females in the industry, especially producers. A hell of a lot more support for POC, LGBTQ, trans/nonbinary, and disabled artists from the public, from other artists, and from big companies.