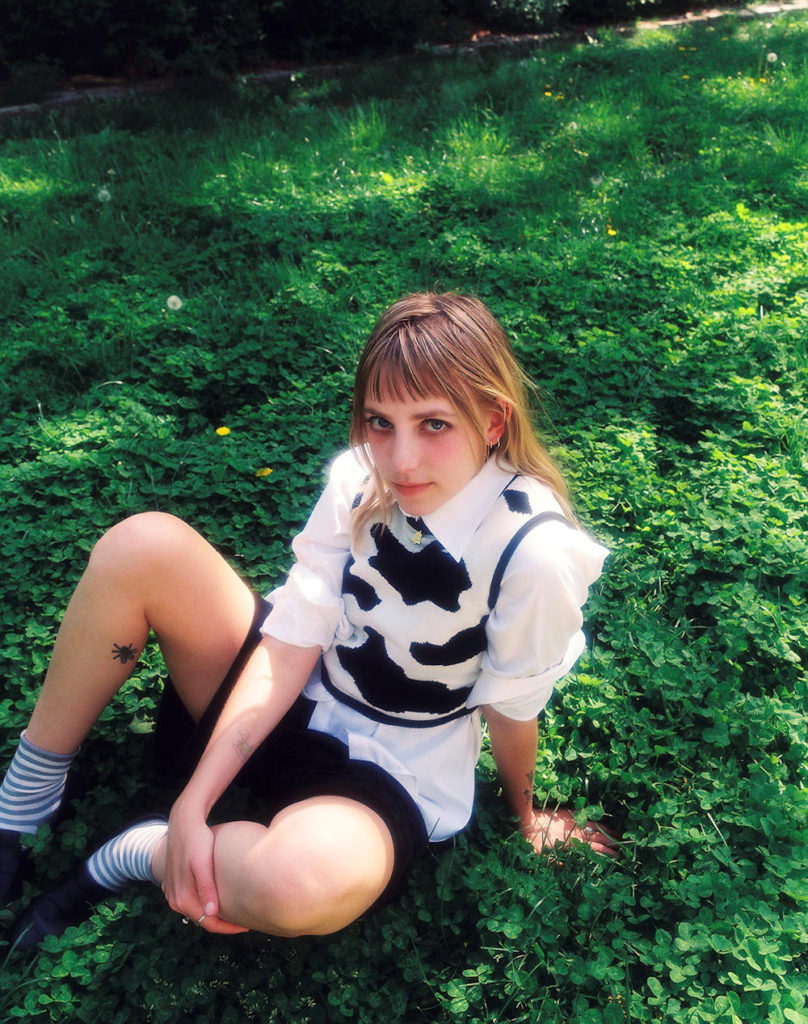 May Rio spent years with her band Poppies. She has now released her solo album Easy Bammer. It features singles “Butter”, “I C”, “Party Jail”, and “Reservations.”

May says of the track, “Reservations” is one of the first songs I wrote for this album–it came when I was isolated, alone, at the beginning of lockdown. There was someone I was very fond of, who was sort of early on in the stages of a heroin recovery. You know, when you know something is kind of doomed but you flutter every time their name comes up on your phone anyway.”

Easy Bammer is May Rio’s, real name May Sembera, quarantine album. It is produced by Tony or Tony and mixed by Sarah Register. At the beginning of lockdown, May decided to sign up for a free three-month trial of the digital audio workstation Ableton, of which she says, “It was intimidating at first — I never have (and never will be) a computer person, but I was inspired by the music a number of friends had made with this program. I was pumping out demos, and at some point figured I may as well turn them into real records.” The blending of May’s beguiling ear-worm pop songs and Tony 1’s left-field production proved to be an initial success, enough so to plan more sessions.

Easy Bammer is not your normal album. It is filled with quick songs, with deep meaning and a soundscape that is DIY electropop mixed with a punk edge. For info visit https://mayrio.cool/

FEMMUSIC:  What was the biggest challenge making Easy Bammer?

MR: I’m not going to say it was easy to make, because so much work did go into it. But it’s hard to look back on the process and think of any real difficulties. How it came together, in all aspects really, felt natural and smooth. Probably the most stressful part of the process for me is mixing—I get really tripped up with small choices especially. But luckily I have some wonderful friends who have the patience to talk me down when I’m feeling overwhelmed.

FEMMUSIC: What were your goals for the album?

MR: It’s easy for me to write sad songs, I’ve done a bunch of that. And not that I’m done with those, but I wanted to make something that I would just have fun listening to.

FEMMUSIC: What changed about your process for a solo album vs making music with the Poppies?

MR: It was different in just about every way. With Poppies, we’d track the basics live, and never to a click. Also, we’d work on songs for a long time—sometimes years. There’d be a lot of back and forth, trying out different versions of songs. For Easy Bammer, I would write a song, and then maybe even just a couple days later I’d bring it over to Tony 1 and we’d bang it out in one intense session. I think that energy comes through—the recordings feel fresh to me. We can both be kind of intense people, and our working relationship is cool because we’re both very quick with our ideas, and both pretty decisive.

FEMMUSIC: What were you looking for in a producer for the album? What did Tony or Tony bring to the project?

MR: Initially I really didn’t know what I was looking for. I mean, someone I felt comfortable with, obviously. But in terms of sound, my only real starting point was that I knew I didn’t want to make something that sounded like Poppies—otherwise why not just put these songs into Poppies? I hit up a couple artists whose work I really admired, had a couple trial days with different people, just sort of exploring what this could sound like. Actually, I wasn’t so sure about Tony 1 before we started, just because when we talked he told me he’d never produced for anyone else before. But yeah, our first day of tracking we really just dove in and I knew right away this was it, this was how I wanted it to sound. It was such a high.

Tony or Tony brought so much to this album. Tony 1 and I—I think our skills really complement each other’s. He’s obsessed with classical music. It’s kind of crazy actually, he’s only been playing piano a few years, but you would think he’s been playing all his life. It’s inspired me to try to learn piano for real. But yeah, I think a lot of his obsession inspires some really wild arrangements. We have a really good musical chemistry, and we’re very direct with each other. It does feel like we’re always on the same page about things.

FEMMUSIC: What made you decide to release the album through Dots Per Inch Music? I see with the Poppies you’ve released on other labels.

MR: Actually, yeah—Poppies was never on a label. We did some one-off deals with labels where they’d make a batch or tapes or records for us, keep half. That kind of thing. But no, we were never on a label, I think we were pretty hesitant to sign with anyone for a long time.

With DPI, I loved the roster through and through. Usually with labels it’s pretty split with me how I feel about their artists. The artists on DPI all seemed very original to me, they’re all doing their own thing. One night I was shuffling through the three songs that Tony 1 and I had tracked so far, and kind of on a whim I hit up Tom (who runs DPI) to see if he’d be interested in taking a listen. We ended up meeting for coffee a couple days later, and yeah, that conversation made me feel confident about working with him. I trusted him, he didn’t try to tell me that there was any one right way to do things. I talked to other artists on his label who had only nice things to say. It was cool, it just felt right—I didn’t feel the need to shop it around or anything. And honestly, it’s been a dream label experience. Tom’s got a lot of integrity, but he always just knows his shit through and through. That’s kind of a rare combination to find in a label person. Or I don’t know, maybe it isn’t.

FEMMUSIC: What was your favorite thing about making the album?

MR: Man, I don’t know. I just love recording so much. I love writing songs, it’s the best feeling. And then recording, you give a song this whole new life. It’s so wild to create this thing that, yeah it came from you initially. But now it’s its own thing out in the world. I guess that’s what people say about having a baby.

MR: My only real consistent technique is I try to just sit down and show up for it, not quite every day but almost. But I’m always mixing up the routine, I don’t want to get stuck in a rut. You know, sometimes I’ll just bang around on the piano, it’ll start that way. Or it’ll start with a guitar riff. Sometimes I’ll have a vocal melody I’ve been singing to myself that’s fully formed. I keep a book of lyrics, but it’s really unusual that the lyrics come first—it does happen though. On the rarest of occasions, a song will just come out fully—lyrics and melody together. But yeah, I don’t know theory or anything (though I’m getting to the point where I’d like to learn some basics). I just follow my ear.

MR: I can’t say that SZA’s “Supermodel” has influenced anything I’ve written so far, but it’s definitely impacted me. It’s one of the craziest songs I’ve ever heard—it’s just so raw, it feels like it came straight out of her. Like it wasn’t even written. I know a lot of people channel artists when they’re writing a song; I’ve never done that. I think this was the first time I thought, damn, I want to write a song like that.

MR: A lot of the challenges are not so obvious. You can tell something is wrong, someone is treating you as lesser than, but then you’ll have someone else tell you that what you’re seeing is not really there. Sometimes it is more obvious. Like, I went into a Guitar Center to replace an amp on tour. My bandmate (a guy) came in with me. I was the one shopping, I was the one plugging in my guitar to different amps and seeing how they sounded. But the sales rep, whenever he started talking about the amps I was looking at, he’d be talking to my bandmate instead of me. Oh, it pissed me off. I said something to the sales rep after, just like pointing out to him why that was not okay. He seemed genuinely surprised.

Poppies had a band member (who we eventually fired) who was always insistent that I should never stand in the middle on stage—the reasoning being that because I was the only woman in the band, I already had more attention on me. Never mind that I was the lead singer. I don’t know, things like that made me uncomfortable to take up more space. I would try and make myself smaller. The final iteration of the band was better. But I would say that with most of my friends being a least a little queer, it ended up being pretty hard on me, being in a band with three very straight cis dudes.

MR: There are a lot of changes I would like to see! But I think one of the most pressing issues is that artists should be compensated by streaming platforms for the work they break their backs to make. Spotify currently pays artists around $0.0032 per stream. How, in any world, does that make sense?