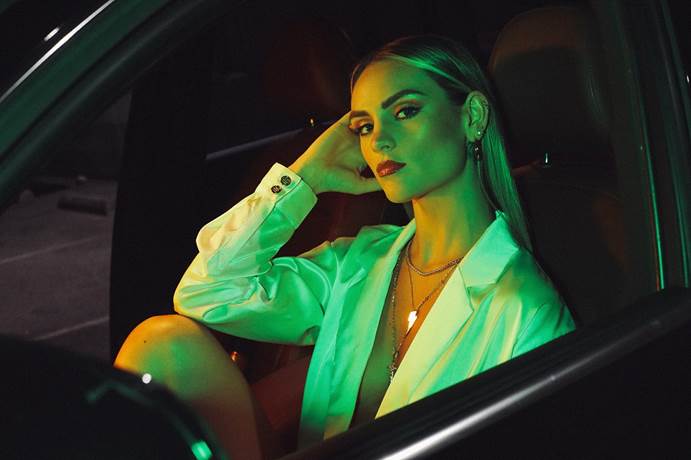 For the past two years Jenny March has been releasing singles including “Talk To Me”, “Rebound”, “Fuwy”, and “California Daze.” Today she releases her latest single “November Nights.”

“November Nights” is about how you can love someone so deeply, even knowing you probably shouldn’t be with this person, and yet you are still somehow addicted to making it work, longing for their love and validation.

“November Nights” also marks the confirmation that March will be releasing an EP later this year. FEMMUSIC had an e-mail interview with March about “November Nights” and the EP. For info visit http://jennymarch.com/

JM: When I first started songwriting, the car was my sweet spot for some reason! I still like to write in the car, but I find myself writing more at home in my new studio room. I think my songwriting has grown a lot more with being completely vulnerable and more versatile.

FEMMUSIC: You have an EP coming out this year. What has been the biggest challenge in making it?

JM: I do! It’s been harder to have sessions ever since we were quarantined, but I’m still trying to write a lot. One of the challenges so far has been figuring out how to incorporate everything I love and want to talk about into 6 songs. The new music I’m making may seem a little different from the previous music I’ve released, but it’s the best music I’ve made so far!

FEMMUSIC: You’ve released a number of singles over the past 2 years. How did you decide which songs were going to be on the EP? Were there any you didn’t choose that you wish you had?

JM: Well, I am still working on the EP, but I know a few songs that will be on it. I’m dropping the first song off it really really soon. 🙂

FEMMUSIC: Who were you most excited to work with making the EP? Why?

JM: I have a couple of friends that I love to create music with and have been working with for this EP. Alex Harris, who I met 3 years ago, is someone who I’m most comfortable writing around. He knows more about me than a lot of my closest friends know. Then there’s Mike Onufrak, a talented producer and guitar player, who went with me on my first radio tour a few years back, and he, Alex, and I have been working a lot together on my EP.

FEMMUSIC: Tell me about “November Nights.” How did your song come about & evolve?

JM: I made this song with Jayden Gray, a producer I’ve been wanting to work with for a while now. We got together and wrote “November Nights” in our first session together. He produced the track and co-wrote it with me. I was talking to him about my situation with this guy that I was talking to and we just started writing about it.

FEMMUSIC: COVID-19 has stopped touring. Has it opened up new opportunities for you to get your art out? How are you using the time inside?

JM: I was sad at first because I had some shows lined up that I was really excited for, but it honestly brought some really cool opportunities that I wouldn’t have had if the situation hadn’t happened the way it did. I’ve been doing lots of interviews like these or via Zoom, but one of my favorite things has been live stream performances. Every Wednesday, I host an Instagram Live show called “Wednesday Sessions” with a new artist and we do a Q&A at the beginning and then each perform 2-3 songs. It’s been amazing meeting new artists, some of whom I’ve never even met before, therefore allowing my followers to meet them and vise versa. It’s been super fun connecting with fans online!

JM: Ahh this is such a tough question. There are so many songs over the years that have had big influences on me, but one for sure would be “Broken Hearted Girl” by Beyonce off her 2008 album, I am…Sasha Fierce. The song just really hit me emotionally at that point in my life. The melodies and her vocal performance touched me in such a way. I want to do the same for others. Also, anything off of Rihanna’s album ANTI hits me hard! I love that the production leaves room for some heavy vocal performances like in “Higher” and “Love on The Brain.”

JM: I don’t think I’ve had to face too many challenges so far where I think it was based on being a woman, but I’ve heard some stories. I think the closest thing for me was dealing with people telling me what kind of artist I should be, what songs I should sing, etc. Since I started in this industry pretty young, I was persuaded in wrong directions at times by people I thought I could trust and I should have listened to myself. My parents didn’t know anything about the industry at first either so I can’t blame them. You kind of just have to take in everything but at the end of the day, you know what’s best for yourself.

JM: I know the music industry is working on this as a whole, but I’d love to see songwriters get better compensation for their work from streaming pay. I think it’s important to acknowledge them for their hard work alongside producers.