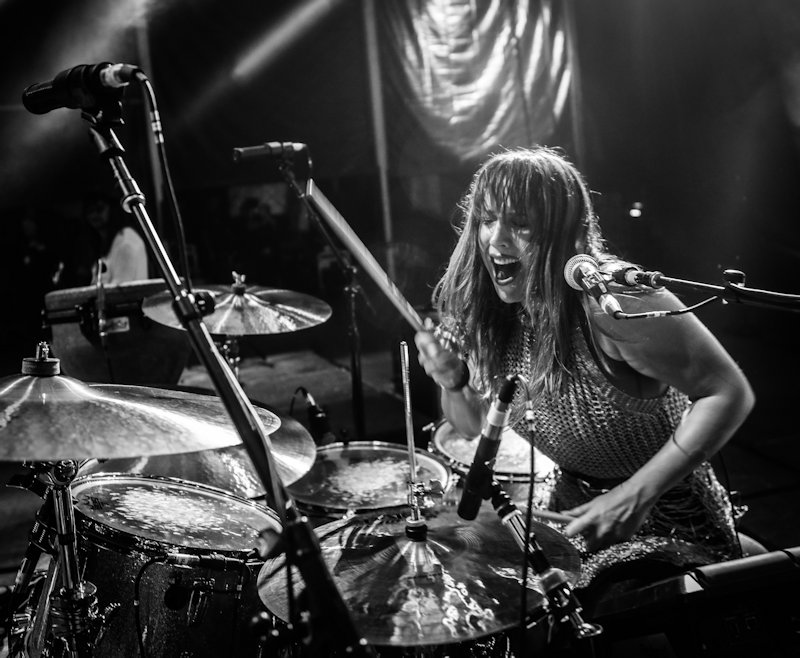 ST: My father was a drummer in NYC in the 70s. I think he wanted a boy but got stuck with me as the only. It was in my veins and there were drums around the house, so the curse transcended!!

ST: There’s so much talent and too many good songs pumping out of Nashville on a daily basis, it’s intimidating. Living here, I’ve only written a handful of times with cats I’ve played or play with and even that’s a challenge! You’re walking into a room vulnerable with your ideas and/or thinking you can add to others.

The process of recording drums with fun time signatures and different grooves & starting from the ground up is something that I’d like to do more of.

ST: My husband and I got married and I basically went on the road for 2 years. At the time, it was show day then 2-3 days off.  It’s hard NOT working, being alone with your thoughts and away from your loved one(s).

The OTHER element is you’re in close quarters with your band mates and/or artist. Everyone has these big personalities, (if your lucky like me, those are my people!) You are family and have SO love for one another, but you’re also trying to not kill each other.

ST: When I moved to Nashville I was told live players don’t play on the record. I didn’t understand. I was at lunch with a major producer and he said “I’m making this record (w/ artist I touring with at the time), with a different studio lineup”, then literal named every dude that was playing on every record coming out of Nashville. I got to tempo map some of the tunes for the record then watch the session drummer cop my parts off a board recording on a tune I co-wrote. I was mad. But lI was also immature. Looking back, I wouldn’t have been ready for sessions at that point.

A few years later I hooked up with producer Marti Frederikson. He kinda took me under his wing and that’s when I really became a better session player. Since then I’ve done slam sessions, ( publisher sessions when your laying down 8 or more tracks 11-2 pm, etc) I Played on Maggie Rose’s, Change The Whole Thing record which was tracked live with a 13 pc band. Drums bleeding through all vocal mics, etc. No margin for error there! I have 4 records I played on coming out in 2020 alone. All different and I’m super pumped on all of them! Right this second, Them Vibes has a single out called “Powers Collide” that I co wrote. We tracked live with me and Matt Nolan of Rude Music on drums. Matt’s mimicking a loop and Im the slop on top. There’s a fun drum break in it as well. NEAT!

ST: They tend to separate themselves. You gotta know what the artist/project calls for before you walk in the door and play to that.

FEMMUSIC:  What challenges, if any, have you faced as a woman in the music industry? And how did you overcome them? Are those challenges increased or decreased when touring?

ST: Let’s say one gets a call for an amazing tour opportunity with a ginormous band and one of the reasons you don’t get the gig is because one of the band members doesn’t want women on the stage, more so he doesn’t want them touching an instrument. That would be wild right? (Like sooo hypothetical)

I can say bs like above happens less now than ever, but it’s still a man’s industry.

But looking at the industry, it’s still a boys club. What about females behind the board? I had the pleasure of working with Trina Shoemaker, the first woman to win a Grammy for best engineered record. That was in 1998. Come on maaaaan.

I would shake up the country format and get it back to its roots. It’s an identity crisis and I can’t listen to half what’s being put out.

I don’t think music shows on national television should allow huge guest stars to come in and auto tune their vocals to high hell when the object is to judge aspiring vocalists. Your perpetuating something that isn’t real and that’s what I don’t enjoy about a lot of the music made today. Not everyone starting out can afford to carry a tuning rig to club dates.