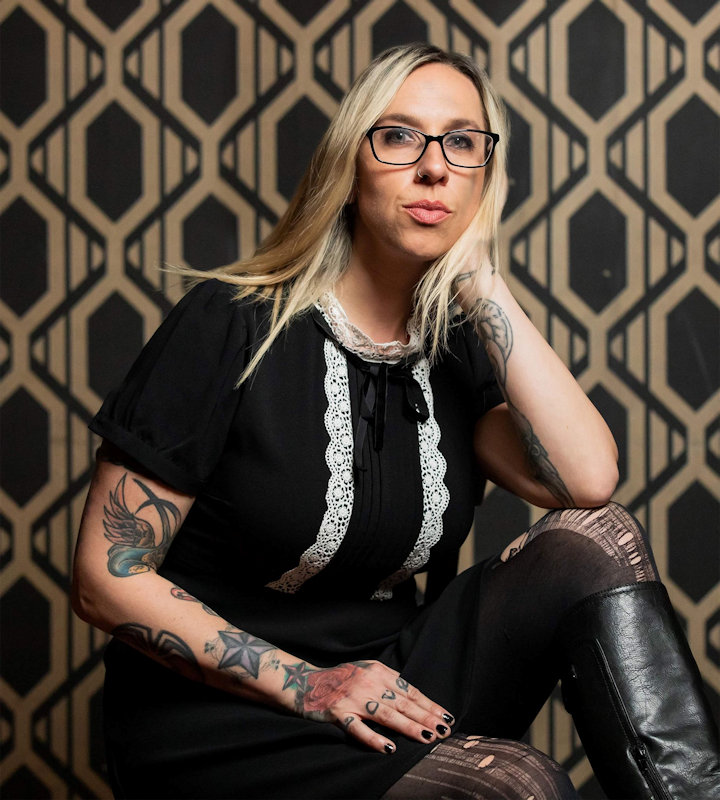 Artists Worked With: As you know, I’m currently working with Scooter Ward and Nick Coyle from Cold, and very honored to be with that band full time, as I’ve been a fan and part of the Cold Army for over 20 years. I also collaborate often with Geno Lenardo from Filter/Chevelle. I’ve worked on many projects with amazing artists in my past. I sang, wrote and played guitar in a band with Eric Klee Johnson and Marc Johnson, two incredible musicians who the own The Pop Machine, a stellar recording studio out of Indianapolis.

LM: I became involved in music as a young child. I sang in the choir at church and throughout my teenage years, in choir at school. I picked up my dad’s classical Alvarez guitar and beat up Mel Bay chord book when I was 17 and wrote my first song. Music was my life, my savior. I would sit for hours picking apart the different parts of songs of my favorite bands: Pearl Jam, Smashing Pumpkins, Hole, Cold, Tool, … the list goes on and on.  I moved from my hometown when I was 19 years old to find people to play with and started my very first band in Terre Haute, IN, called No Strings Attached (NSA). Indiana back then didn’t have the music scene I needed, so my then bassist and I moved to Gainesville, FL with all our gear and no money and started a band there but we never got it off the ground. I was working at gas station and had maybe 50 bucks to my name and was seriously considering moving back to Indiana to go to college. I happened to have a good friend living in St Petersburg, whom was also my tarot card reader for years and years. She told me there was no way in hell I was going back to Indiana, so I packed my things, broke up with my band, and moved to St. Pete. I was a body piercer also. That was my vocation. There were just no tattoo shops in Gainesville that had any open spots. I found a job in Tampa working for Vahalla Tattoos, and got an ad in the paper looking for people who were interested in the bands I was in and wanted to start a band. I auditioned people, people auditioned me, and I ended up working with the talented David VanBreman and we founded Pretty Machine Gun. That project was fun, but never went anywhere but we did play some great shows and it was my first time actually recording in a studio. I was 21 at the time. (Found out later on that there was another metal band name PMG, but that was years later).

I ended up taking a little break from music, fell in love, moved to Chicago to try to make this love work, and then when it didn’t, I ended up back in my hometown in Indiana. I was still writing and playing open mics and things of that nature with my original music. During this time, I got pregnant, had a baby and was in college full time getting a communication degree. My guitar would sit in my closet, unplayed, for a couple of years, as I was extremely busy with schooling and my young daughter at the time.

Then one day, out of the blue, I just started writing again. I played at an open mic and ended up meeting my husband of three years. Gregg. He was and still is an incredible musician. He plays every instrument and can murder a fretless upright bass. We ended up starting a band together called, We’re Not Mexican. He is the one who encouraged me to pick up the bass. I was 27 at this point. I loved it. I was always a better bassist than a guitarist, although I would still play both and still do to this day.

Once my marriage split, I ended up moving to Indianapolis and it was there, I met the beautiful ladies of Neon Love Life, and we co-founded Girls Rock! Indianapolis. We started Neon Love Life to make an example of what you can do and write as females in the industry. I actually did a TEDx talk on it. We went into the studio and recorded our first full-length album and it ended up becoming the number one album of the year in Indianapolis according to music journalist, David Lindquist. And while I was ready to get out there and take it on the road, our lead guitarist, Ashley wanted to go to Yale. (Which she did and is now a doctor and I love her dearly.) Neon Love Life split after just two years and I started the Kaleidostars project with the brothers Johnson of The Pop Machine studio and Wonderdrug. We recorded an EP, and got endorsed by MLX mics. This alternative project is on Apple music and Spotify. We took that project to SXSW and tried to shop it but it just wasn’t resonating with anyone.

That being said, there was a rock band out of Indianapolis that Eric Klee Johnson had recorded and produced. They needed a bassist for a television spot that their current bassist couldn’t record. It was called Picture Yes. Since Eric played bass they asked him to do it, but he was busy, so I decided to learn the songs and do it. They were thrilled and ended up hiring me on full time as their bassist. We ended up going on the road with that project, opening up for the band, Saving Abel. We spent months and months on the road in a van and it was my happy place. I guess now is the time I should mention that I got the Cold spider tattooed on my body when I was 21. A Cold fan saw me play at a show and sent Scooter my photo. Jeremy Marshall, Cold’s original bassist had left and was working on a different project. I was touring with Picture Yes and had also taken over role as lead vocalist at that point. That’s when I got a tweet from Scooter saying he’d like me to call him. I did immediately and he asked if I wanted the gig, and it was an immediate yes. In the time it took for us to actually get in the studio, I was still playing with Picture Yes, but since we had changed singers, we renamed the project to Chasing The Sun. However, I moved on from that and moved to LA and then later, Temecula with Scooter, and we recorded the album with Jeremy Parker along with Nick Coyle on guitar and Aaron Fulton on drums. The Things We Can’t Stop, (Napalm Records), Cold’s sixth studio album, and my first album with them, debuted at 34 on Billboard and was in the top 10 on other charts.

I’m also very honored to be officially endorsed by Diamond Guitars. They have just created my own bass series called The LM Series Maverick and LM Series Hailfire. They’ll be available for purchase to the public after this year. We are also endorsed by Ernie Ball.

LM: My songwriting technique absolutely varies according to the particular project I’m working on. I used to write a lot with my guitar, but now with bass being my main instrument, I write mainly on that. When I write solo, I hear a melody in my head, I start to play it, I begin writing lyrics. I basically can hear the entire song in my head, so I just write out the chords so I don’t forget, sing it on voice notes. I actually probably have an entire album on my voice notes that I should be recording. Perhaps I’ll get to them when I’m not so busy.

Scooter basically does all the writing in Cold. He is a mastermind creator and storyteller. There are times he already knows how he wants me to play a particular part and shows me, and there are times he gives me free reign on what I hear for a particular song. It really all depends on his vision, which I’m one thousand percent okay with. I feel so very blessed to be able to work with one of my all time favorite musicians and even more honored to call him a best friend.

When I work with Geno, it’s usually for television or film. He writes the music, sends it to me and I create the lyrics and melody, and then record the vocals in his studio, usually the next day. We have timelines on those types of projects. Some timelines are longer than others, but it’s a blast to be able to create music in any form.

LM: Touring is not at all challenging for me. It’s my favorite place to be. I’m a road warrior and love every minute of it. It’s nice to be in a tour bus with people I absolutely adore versus being in a van like I had always been in the past.

LM: I work in the studio a lot with Geno. The past couple of months have been very busy so haven’t work with him as much post-tour, but I’m also a partner in a luxury candle making business that Geno’s fiancé, Tricia Meteer created this past summer called EQXshop. I do have a song we’re going to be finishing up before I go back out on tour with Cold that I’m very excited about.

LM: Separating projects is all about time management. I also have a book coming out this summer called Unkcufwithable: A Guide to Inspired Badassery (pronounced UnFUCKwithable). My personal blog has suffered the most from my insane schedule this past year, but there’s a time and place and vibe for everything, and I’m sure once the little things get checked off the list, I’ll have more time for it.

LM: I’ll be completely honest about this, for me, personally, I’ve never really had “challenges” per se. I’ve always been a respected musician. I work hard, I learn parts, I do my role in whatever position it pertains to. I got my dream gig with Cold and work with Geno BECAUSE they wanted some femme in their music and wanted to work with me. Like I said, I’m very honored and I’ve been very respected in the music industry over the twenty some years I’ve been in it. I don’t look at myself as a “female” musician so much as I do a musician. I think it takes a lot of determination to never give up in the industry. That’s the hardest part. But this was always my dream and I never really detoured from that.

I don’t have road challenges. Or perhaps that challenge is when I’m on my period. (wink wink)

LM: I think that the one thing I would change about the music industry is artist compensation in more than one area. We roll around in a tour bus and we have lives, but we don’t do this for the money. We do it for the love of music because that’s WHO we are. We are creators, and we can’t live without that creation and all the drama that surrounds it. But I’ll take that drama over anything because life is art, and I’m living my best life.