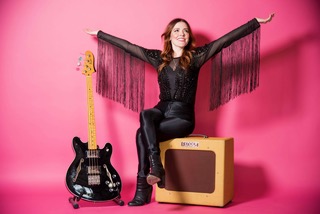 AC: My dad is a professional musician down in New Orleans. He needed a bassist for his own projects so he taught me to play. I started playing gigs with him when I was a teenager. I graduated from the Berklee College of Music and began touring professionally after that.
FEMMUSIC: Can you describe your songwriting technique? How does that change with a band vs solo?

AC: I’m definitely a lyrical editor. I’m always seeking to explain a thought or an emotion as clearly as possible. I’m a bit of literalist, less of a poet. If I’m writing alone, I tend to tell a literal story, usually autobiographical. If I’m writing with a band, I think I’m good at taking other ideas and making them fit into the puzzle of the rhyme scheme. I find myself approaching writing as solving a puzzle.

AC: Pondering how I can have children and also tour. I spent years worrying about this. Finally I froze my eggs (best decision ever) and once my boss Maren became pregnant she offered me the opportunity to bring a child of my own on the road. My husband and I are now expecting our first child, 2 months after Maren’s is due.

AC: My passion is live performance and I haven’t actively pursued a career in the studio. I get calls to do sessions over the internet and will occasionally work on projects in town. My husband operated a studio for years specializing in music for film and TV and I did a lot of that work back then. I’ve been fortunate to play and sing on albums for many of the artists with whom I tour and I’ve done a few projects for producer Dave Cobb who is amazing. You’re more likely to hear me on live records rather than studio recordings. My favorite live recording I’m on is Amos Lee’s Live From Red Rocks with the Colorado Symphony Orchestra. I’m also on Sugarland’s Live on the Inside which was a number one record so that’s pretty cool!

AC: I’ve been fortunate to have a really good gig for most of my career. It’s important to me to have several things going on to keep me inspired and it’s been a luxury to be able to have the financial cushion of a solid gig which allows me to pursue passion projects that may be musically rewarding but not necessarily financially so. My priority is always my main gig so that makes it challenging to make a big push with anything else but I’m able to contribute in ways that work logistically for me. That’s why my band Side Piece works so well for me. The whole idea is that it’s comprised of other side women so we all understand that people will need to sub out on occasion. We set it up that way. 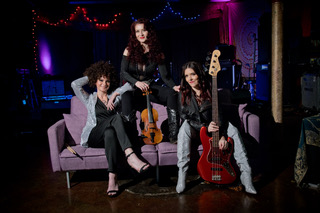 AC:  I’m always faced with people who doubt my ability simply because I’m living in a woman’s body. The flip side is that people are so surprised when a woman CAN play that they’re blown away. A big challenge for all women in this industry is physical appearance. A guy can throw on a baseball cap and a ratty t shirt and get on stage. Women spend time and money that men don’t to get ready for a show. When I appear on television, I spend at least an hour in a hair and makeup chair. There’s wardrobe involved. It can get very expensive. There’s just a LOT more that’s expected of a woman than a man in that regard. I’ve been teased on the internet for wearing the same clothes multiple times on stage. It’s important to talk about this discrepancy and make people aware of it.

I think my attitude is the most important weapon in fighting sexism. I have to be confident in my abilities, advocate for myself, insist that I make what everyone else is making even if it means having an awkward conversation with the people I work with making sure we’re getting paid the same amount. I don’t have a chip on my shoulder about being a woman. I’ve made my career as a singing bassist for female artists who want female harmonies during their show. It’s an asset. I think I do a good job of advocating for myself and all women without alienating the people I’m working with. Bitterness and anger aren’t successful attitudes to make inroads. Compassion and conversation are much more effective.

AC: I’m working on this with Side Piece. I want there to be as many women in this business as men, removing the novelty from an all-female band. When men get together and play, no on calls it a “boy band.” Side Piece shows are safe places for any woman who wants a chance to perform on stage to have one. It’s very intimidating to walk up to stage full of men and ask to play. We’re an all-women band so that other women can see what’s possible and feel comfortable to take a chance themselves. My hope and my aim is de-socialize the notion that playing an instrument is man’s work. I’m pregnant with a girl. I want a world where she can operate without fear, stigma or feeling like a novelty. I want her to be free to be herself.