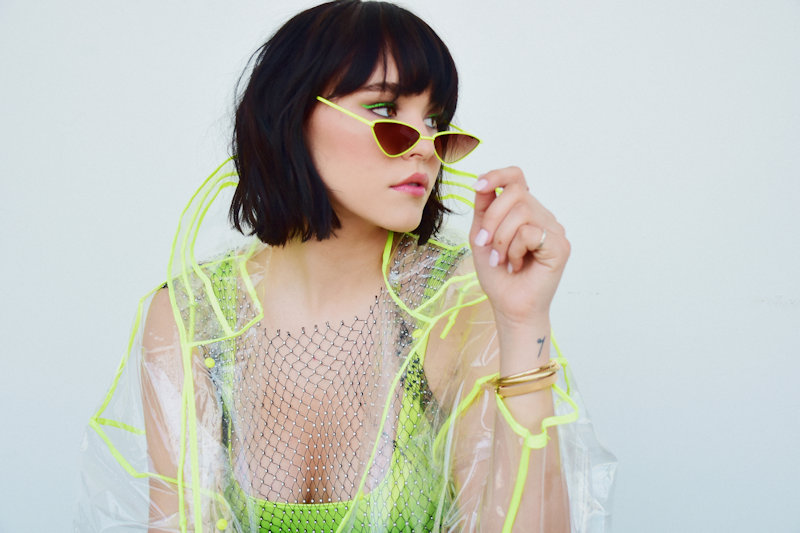 Upsahl is Taylor Upsahl. She is originally from Phoenix and now lives in LA. She comes from a musical family. Her father Mike is in and toured with a number of bands. She has released music independently before she was signed to Arista. This year she released Hindsight 20/20 which is a pop album filled with clever lyrics. The EP is produced by Mike Green and is filed with songs including “Stressed”, “All My Friends Are Rich”, “SMARTY”, “Fine” and “Drugs”

She will be touring soon with Tessa Violet. For info visit https://www.upsahl.com/

FEMMUSIC:  What was the biggest challenge making Hindsight 20/20?

U: I think the biggest challenge for putting together the EP was picking only five songs out of the 200 I had written last year. I spent my first year in LA writing a new song pretty much every day, so I wanted to make sure that each of the songs on Hindsight 20/20 were the most authentic representation of where my life is at right now.

FEMMUSIC: I was able to catch you live a couple of months ago. I was struck by how similar in theme “Drugs” and “All My Friends Are Rich” are. I was curious what personal experiences drove making those songs.

U: “Drugs” and “All My Friends Are Rich” are both commentaries on LA and how I was feeling when I first got there. “Drugs” is about meeting fake people at parties and wishing I could find genuine connections in such a saturated city. I definitely struggled to find people that made me feel like the best version of myself when I first moved to LA because I feel like the culture in that city is very self involved, with a “fake it till you make it” vibe, so making real friends was hard for me at first. I wrote “All My Friends Are Rich” about how I felt when I started working on music in LA. I started to meet all these incredible people, but a lot of them were older than me and had their shit together way more than I did, with way more money than I had. I basically just wanted the song to be a fun vibe with relatable lyrics, and what twenty year old can’t relate to being broke?

FEMMUSIC: Tell me about Arista. How are they to work with? What made you decide to sign with them?

U: Arista is a dream come true. The way I ended up at Arista is actually kind of crazy. I had met David Massey and I immediately could tell that he understood me. He hit me up saying he was reopening Arista and wanted to sign me as the first artist on the label. Not only has signing a record deal been a major life goal for me, but to sign to such a legendary label like Arista is a true honor. I feel really thankful for my team there.

FEMMUSIC: Tell me about Mike Green. How did you meet? How did you decide to have him produce the EP?

U: I met Mike Green in a writing session when I first moved to LA, and I immediately fell in love with his production style. He has made such incredible songs with alternative artists in the past, so I was really stoked to be able to work with him on “SMARTY.”

FEMMUSIC: Unlike a lot of artists you had a better idea of what touring life and the music industry was before you began. What do you tell other artists about touring? What is your own survival skill doing it?

U: I am in love with touring and being on the road. Growing up, performing was always my favorite thing to do, so to be able to wake up in a different city every day and play for a new crowd of people each night is pretty rad. I normally am a very stressed person, but for some reason when I’m on the road, I’ve gotten really good at just rolling with the punches. I’m still so new to touring, but so far I’m obsessed with it. I would do it year round.

U: I guess my biggest songwriting “technique” is to just treat writing as a venting session. When I first moved to LA, writing every day was like therapy to me, so however I was feeling that day, I would put that feeling into a song. I think the coolest thing about music is that it allows us to be vulnerable in such a creative way, so I really try to hang on to that honestly and vulnerability when I’m writing.

U: Weezer’s “The World Has Turned and Left Me Here” has always been one of my favorite songs. I grew up listening to them all the time, and the songwriting of that song is just crazy. I feel like Weezer really evolved pop/alternative music and writing, so I take a lot of inspiration from their first two albums.

U: All women in any industry face a lot of challenges on the daily, unfortunately. I work in a part of the music industry that involves working with a lot of rad creative people who are very aware of the power of women in music. Sometimes though, I feel like people think that a young female artist who writes her own songs can’t actually write, and they think it’s always cowriters or producers doing the work, and the artist just putting her name on it. That’s not the case most of the time. Some of the best writers/producers/artists I have ever worked with are women. We’re definitely headed in the right direction with gender equality in music, but I think we still have a ways to go.

U: I would absolutely love to collaborate with Kevin Parker. Tame Impala has always one of my favorite bands, and I really think he’s a fucking genius. It would be a dream to work with him.

U: I wish social media wasn’t such an essential part of starting a career as an artist. It’s frustrating that sometimes we find ourselves looking up an artist’s Instagram before actually listening to their music. We’re not meant to be social media influencers. We’re musicians. I love social media and am so thankful for what it has done for artists like myself, but it