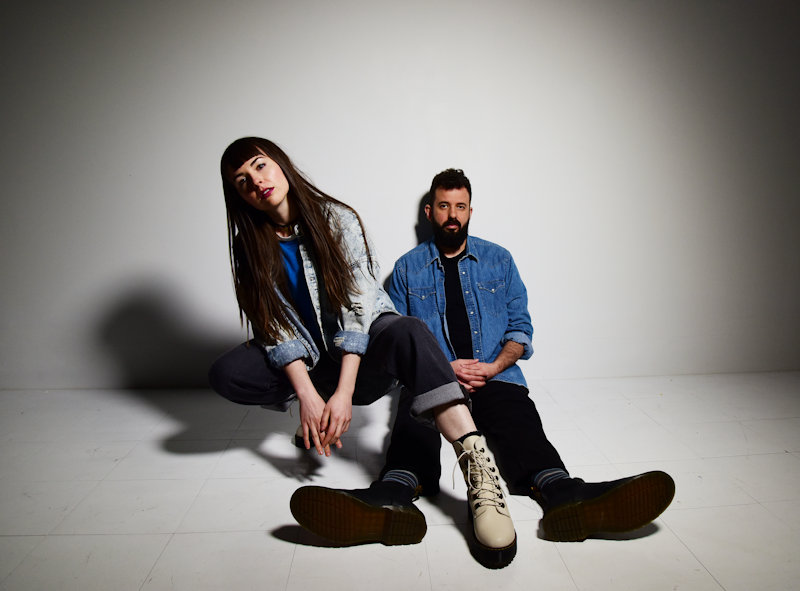 https://www.clavvs.com/
Clavvs has been on our radar for sometime. This NY duo, formerly of Atlanta, has an evocative synth style and lyrics that are woven from gold. Clavvs is Amber Renee & Graham Marsh. Renee comes from a background of musical theater and Marsh has produced Grammy winning albums. They recently released the No Savoirs EP and the track “Devils I Know”

They have played SXSW, Canadian Music Week and other festivals that FEMMUSIC covers. We were honored to talk to one half of the band, Amber Renee. For more info visit https://www.clavvs.com/

FEMMUSIC: What was the biggest challenge making the No Saviors EP?

AR: Creating a thing is always inherently challenging. It takes work to pull something out of nothing. It’s kind of weird and wonderful that way. This time around Graham (the other half of CLAVVS) and I were much better about self-editing and abandoning ideas that we didn’t both love. Maybe our biggest challenge was being mindful enough to know when the songs were truly finished. It’s easy to second guess yourself and pick at things too much.

FEMMUSIC: Tell me about “Devils I Know.” How did that song develop?

AR: “Devils I Know” was one of the last songs that we finished for this project. It came together all in one moment while we were tracking a different song entirely (one that we ultimately scrapped). I suddenly had the idea to try several new melodies I had been working on over the same track. We tried it out, and it ended up working really well.

FEMMUSIC: As I was prepping this I see your next show is back in Atlanta on July 17. Tell me about the decision to move to Brooklyn. How has it affected you and your music?

AR: Moving to Brooklyn was the best decision we ever made. We love Atlanta, but we hit a ceiling there and couldn’t see a way forward. We landed in Brooklyn after we fell in love with the city when we’d play shows here. It’s a special place with a really creative energy. I think the spaces you inhabit influence your creative decisions in a mysterious sort of way, so in that way, Brooklyn has definitely had an impact on my songwriting.

FEMMUSIC: I noticed you have a background in musical theater. I was curious if you take a persona for live shows and how you incorporate it in the band.

AR: Musical theater was the first way I was really able to perform on stage. It challenged me to get past a lot of my performance anxiety, but I don’t think it really influenced the way I perform now. I don’t put on a persona for live shows, but there is a certain energy I’m always trying to achieve. Our live shows are about dancing and being with friends, (and hopefully!) they’re a place where people can just be themselves and enjoy the music.

AR: Writing songs is a cool sort of magic that I can’t fully explain. When I stumble onto a song, it’s usually when I’m in the middle of doing something else. A piece of a melody or lyric will just appear in my mind, and if I’m lucky, I’ll record it before it floats away. A lot of my songwriting has become about following the ideas I love and letting go of the ones I don’t. I’ll work on a song for weeks, fine tuning each lyric and melody, making sure I absolutely love it, and then I’ll show it to Graham. From there, we both do our best to get out of the way of the song. I’ve found that I can’t really force my will onto the music without ruining it.

AR: Ooh that’s so hard! Probably “A Better Son/Daughter” from Rilo Kiley’s The Execution of All Things. It’s such a brutally honest and vulnerable song about getting through the hard moments. It’s so human. Listening to that song in high school was the first time I ever felt truly heard and understood by a songwriter.

AR: I think it’s more of a constant thing you learn to navigate, because I haven’t overcome it. Our band is regularly overlooked because I have a woman’s voice and point-of-view. A label head once told us he couldn’t sign us because they had already signed three female-fronted acts that year, as if “female-fronted” is a genre that might go out of fashion. Ultimately, women have to fight harder to occupy the same spaces that are given to men and we have a smaller window of time to do it, because ageism is still a thing. It’s wildly frustrating, especially when you think of all of the incredible voices who’ve never been heard as a result. But it doesn’t stop me from making music or from encouraging other young women to pursue it. We need more women (and especially WOC) artists, producers, engineers, music supervisors, managers, etc. That’s the only way anything will change.

FEMMUSIC: Who would you most like to collaborate with or tour with? Why?

AR: Ooh this list is long! I think our top pick for collaboration right now would be Cautious Clay. His music is so incredible and I bet touring with him would be really fun, but the ultimate dream tour would probably be with Santigold.

AR: I would legislate streaming platform payouts. The percentages need to be raised, and not just once, but regularly, so rates are adjusted for inflation and reflect the growth of each respective service. Call me a radical, but I believe artists deserve fair payment for their work.