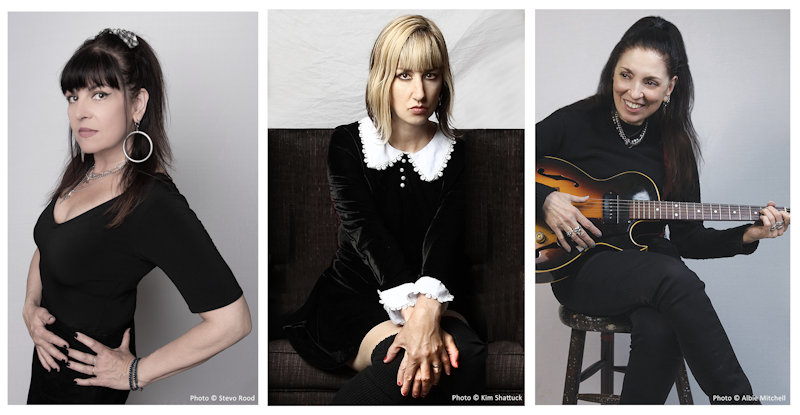 The Coolies are the newest supergroup and they are releasing a special 10” EP to battle ALS. Kim Shattuck and Melanie Vanmen come from both The Muffs and the Pandoras. Palmyra Delran is from the Friggs. All 90’s bands that helped shatter stereotypes of women in music. Within The Coolies the three are also transformed to Kim is Kimba Coolie, Melanie becomes Melimba Coolie and Palmyra is Palimba Coolie

Now the three have come together to take on a bigger challenge, ALS. All of the proceeds from the 10” will go to the ALS Foundation. FEMMUSIC was happy to speak to these legends about the 10”, ALS and how the music industry has changed. For info visit   https://m.facebook.com/ItstheCoolies/     To pre-order the 10” visit https://geni.us/TheCoolies

FEMMUSIC: What was the biggest challenge making The Coolies EP?

Kim: Not really a challenge because it was the easiest way to record ever.

Melanie: Just so amazing and easy recording with these badass chicks!

Palmyra: These days, you can work together from anywhere. It would have been super fun to be in the same room – although we would probably be laughing most of the time!

FEMMUSIC: Tell me how The Coolies came about. What made you want to start the group?

Melanie: We are all best friends. Kim said, “I wish we could be a band” and Palmyra said, “well…” and just like that we became The Coolies!

Kim: I posted an Instagram picture of Paula and her bare butt. Palmyra commented and called it her coolie. Ah the perfect name for our band!

Palmyra: We formed in 3 seconds!

FEMMUSIC: What made you decide to work with Wicked Cool Records on this project? Tell me about the choice of format for a 10″ with the 3D glasses.

Kim: The label is the top shelf, by all that they’ve been doing! I’m totally impressed by the way they are!

Melanie: Wicked Cool are the coolest! The idea of the Archie’s style cover in 3D is just too much fun!

Palmyra: My most recent record was released on Wicked Cool, so I was already thrilled being part of the family. They are the coolest group of people over there, and I knew that they would totally get The Coolies! They have a fantastic in-house illustrator, Louis Arzonico who did the cover and he thought it was essential to include the glasses! 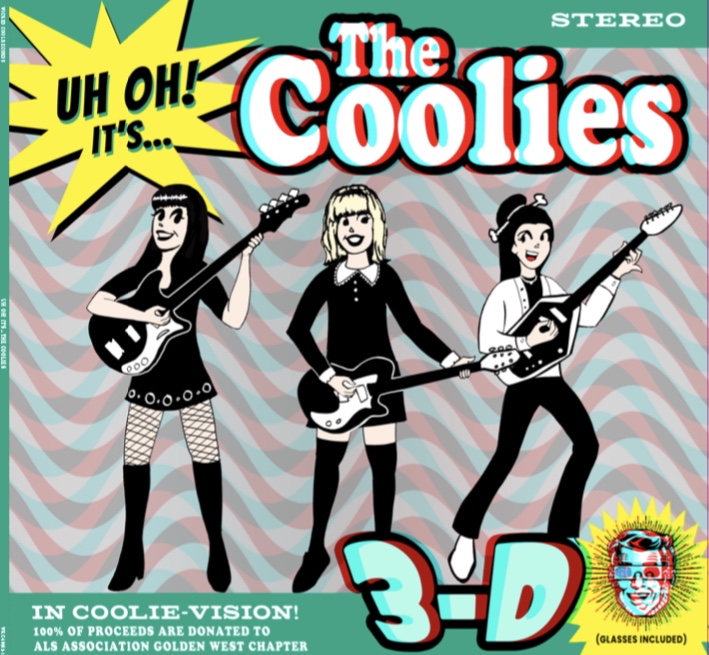 FEMMUSIC: Why are you donating all proceeds from the album to the ALS Association? Who do you know who has been touched by ALS?

Kim: It runs on my dad’s side of the family and it’s the one that doesn’t have a cure where you’re rotting until kingdom come. It’s hard to believe that they have been struggling to find a cure!

Melanie: This is a horrific disease no one should ever have to endure. I think if you haven’t been close to it, lots of people don’t understand what someone goes through. It needs a cure now and we want to help!

Palmyra: We’re committed to bringing awareness to ALS and raising money to find a cure.

FEMMUSIC: You all came of age in the music business in the 1990’s. How do you think the business has improved for women since then?

Kim: I think it’s better for everyone!

Melanie: Honestly having been in an all-girl band the Pandoras and in the Muffs, I’ve never felt that we’ve been treated differently because we’re girls. We’ve always spoken our minds and done what we want. I’ve never felt intimidated by anyone!!

Palmyra: Unfortunately, there will always be people who think it’s a novelty. So silly!

Kim: “She Said” by The Valentines. Beautiful voice, cool chord changes, and it’s not long.

Melanie: “You and Your Sister” by Chris Bell. Just so beautiful.

Palmyra: It changes all the time, but today I’ll say “You Don’t Care” by Arthur Alexander. Badass guitar, gorgeous voice. If you ask tomorrow, it will be the Monkees – “Love To Love,” or something.

Kim: I’m already doing it with The Coolies!

Melanie: Alex Chilton would have been a dream come true! I feel so honored to be able to make music with Kim and Palmyra.

Palmyra: I’ll have to agree with my gals – The Coolies! Or maybe Ray Davies, Steve Marriott. Debbie Harry any day!

Kim: I would like to see less shitty, generic hip-hop!

Palmyra: I wish it was more about music