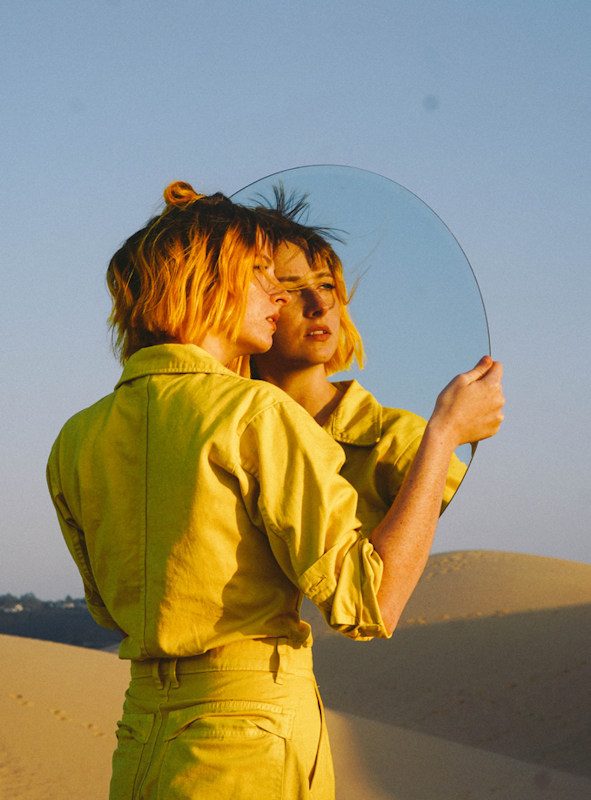 https://tessa-violet.com/
Tessa Violet was born on the internet. In 2007 she started as Meekakitty and exploded. In 2014 she released her first album Maybe Trapped Mostly Troubled. These days she has been touring and releasing a bunch of singles including “Bad Ideas”, “Crush”, and “I like (the idea of you.)” She has a creative songwriting style mixed with a playful side. Look for Tessa Violet at this year’s Underground Music Showcase.

TV: I’ve always felt that songwriting to me was like digging up dinosaur bones, that is to say the song (or dinosaur) already exists. Your job isn’t to make something from nothing, it’s to tap in to this sometimes head/heart/gut sometimes spiritual experience and be the conduit that brings the song in to the world. It’s already there inside of me, i just need to find and assemble all of it. On a more technical level: I start on guitar or piano and I write lyrics and melody together. Then when they’re finished (or mostly finished), I bring them to Seth and we work together to produce them!

FEMMUSIC: So far you’ve been releasing singles. Are there plans for an EP or album?

TV: Yeah! I’m releasing a few EPs then eventually all of them on one album.

FEMMUSIC: What did you learn making Maybe Trapped Mostly Troubled that you apply when making music today?

TV: It’s a little hard for me to separate the experience of MTMT from just the experience of exploring music for the first time. I’ve been really lucky that the first producer I ever worked with, Seth Earnest, has been the one I’ve stuck with all along. We also started working together almost right when I started exploring writing so it’s a whole mesh of new and good experiences.

FEMMUSIC: It’s been over a decade since you emerged as Meekakitty. How have you changed? How has your music changed?

TV: I wrote my first song in 2013. I think since then I’ve just become a more honed songwriter, I have a better innate sense of what works and why. As for how I’ve changed personally in the last twelve years… I mean?

FEMMUSIC: What goals musically do you have?

TV: At my core I just want to make music that is genuine to my experience and my taste. Writing is still very personal for me and is often an experience of trying to give words and a soundtrack to an experience I want to better understand (when it’s heavy) or relive (when it’s light or beautiful). I guess i want that to continue to be true. Beyond that I want to uplift, encourage and value people, both the people I work with behind the scenes and my fans who come to shows. I’d love for my shows to be a break for people from the heavier parts of life, an opportunity to come together with other like minded people and celebrate live music, both in sadness and in glee.

FEMMUSIC: What was the biggest challenge making”I Like The Idea Of You?”

TV: Dude the bridge evaded me forever on this song. I think I had like five different bridges for this song in all its iterations, but none of them ever felt right until I finally got to the one you hear on the record! Sometimes writing is a test of perseverance. We actually cut the song from the record in the summer, then added back on the following winter.

TV: Just one?????? Maybe…. “Some Nights” by Fun? I love Jack Antonoff, I’ve followed him from project to project.

TV: I don’t think I’ve really had to face too much prejudice in my career. Men ask me if I write my songs a lot and I always wonder if male artists get asked that as much as me haha, but that’s pretty much the extent of it.

TV: Jack Antonoff. He just seems like a very special artist to me, his music feels like he makes choices that please him and it’s refreshing to listen to something so genuine. also just like, flat out excellent haha

TV: Maybe a higher split for the songwriters on song sales?